Amid increasing tensions between militias, Muqtada al-Sadr calls for reforming the PMU 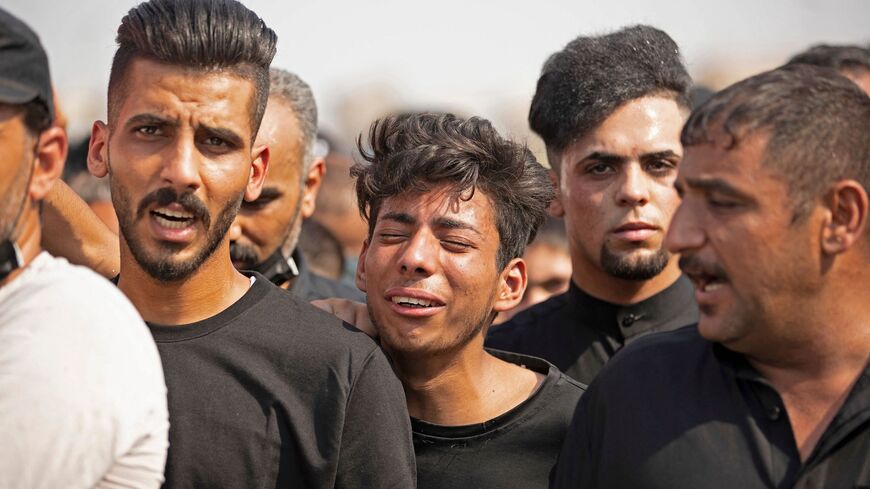 BAGHDAD — Funeral processions had barely been held for the dozens who lost their lives earlier in the week before rival Shiite armed groups continued shedding each other’s blood — this time further south.

At least four people were reportedly killed on Thursday in Iraq’s oil-rich, key southern port city of Basra, though one person close to the government claimed that six had been killed and that the fighting was “ongoing.”

At least two of those killed were reportedly from Saraya al-Salam.

This comes two days after Kadhimi's speech accusing the militias of not following the commander in chief's orders and saying he would step down if they continue to do so.

The fighting stopped in Baghdad as abruptly as it started — both times shortly after announcements by Sadr, but not before around 30 people died, among them his own supporters, rival Shiite militiamen and security forces.

The night between Aug. 29 and Aug. 30 was marked by RPGs, missiles and mortars being fired in Baghdad amid what sounded and looked like war in the most heavily fortified part of the city, the Green Zone. The conflict began after a month of a peaceful sit-in near government buildings by Sadr’s supporters.

Rival Shiite militiamen and their supporters had set up tents and camped out on the other side of the river in the Jadriyah area, a stronghold of Iran-linked political and armed factions. Members of these factions are accused of being involved in sparking the subsequent conflict in the Green Zone.

The violence in Basra that began in the early morning hours of Thursday was on a much more reduced scale but raised serious concerns nonetheless among Iraqis and those aware of long-festering animosities between these rival, heavily armed Shiite factions.

The government-linked Iraqi Security Media Cell tried to dispel concerns about the violence, claiming that it was simply a murder case and authorities had the situation under control.

Local reports from the ground seemed to contradict these statements.

By Thursday afternoon, the situation seemed calmer — albeit amid high tensions about what might ensue over the next few days.

Shiite leaders on both sides of the widening divide proceeded to make statements that would deflect blame for any lives lost.

The leaders of the top Shiite armed groups in conflict with Sadr now also seem to be trying to create an image of being “peacekeepers,” echoing the sort of move made by Sadr in his Aug. 30 press conference in which he demanded his followers leave the Green Zone within 60 minutes or he would “wash his hands of them.”

Sadr’s followers obeyed, and relative peace had suddenly been restored.

Following Thursday’s outbreak of violence, AAH leader Khazali announced that all offices of the armed faction would be closed.

He instructed his followers not to stop anyone from burning the offices if they tried and to refrain from escalating the situation or reacting to anyone showing “disrespect” toward him.

Soon afterward, the leader of the other group that some have accused of being the main instigators of the violence earlier in the week against Sadr supporters in the Green Zone, Kataib al-Imam Ali’s (KIA) Shibl al-Zaidi, also announced the closing of his group’s offices in Basra.

Both AAH and KIA are part of what is known as the “muqawama,” or the Iran-led resistance. Both have fought in Syria on the side of the government under Bashar al-Assad and against local opposition forces.

They are also both splinter groups of the anti-US armed group Jaish al-Mahdi, led by Sadr during the years following the 2003 US invasion of the country.

Grievances between the more nationalistic leader Sadr and the leaders of these groups date back well over a decade.

In a 2019 interview in Qaim near Iraq’s border with Syria, one KIA fighter told Al-Monitor that his group crossed the border at will but had "no contact with the Syrian regime’’ since it is a "Baathist regime, like Saddam [Hussein]'s,” but that they “are of course in contact with Iranian forces and our brothers in the muqawama.”

Sadr has long been against Iraqis fighting beyond Iraq’s borders.

AAH was also involved in the liberation of the Iraqi border city of Qaim in early November 2017. Officials had told Al-Monitor some days later that all “non-local” PMU had left the area shortly after the liberation.

A visit by Al-Monitor to the area proved otherwise, though, and non-local PMU as well as muqawama remain in the city now, almost five years later. Some are accused of involvement and profiting from the lucrative regional drug trade.

Many in Iraq are concerned that these “resistance” groups do not consider themselves beholden to the Iraqi government either.

Some have been accused of involvement in the attempted assassination of Kadhimi.

As the Washington Institute for Near East Policy noted in a 2021 profile of AAH, “After the October 2021 elections, in which AAH's al-Sadiqoun party dropped from 15 seats to 4-5, Qais al-Khazali rejected the election results and publicly threatened the stability of Iraq. Khazali authorized violent protests against the government that resulted in at least one death, and coordinated a drone attack on the house of Prime Minister Mustafa al-Kadhimi on Nov. 7, 2021.”

Muqawama factions were against Kadhimi’s becoming prime minister in May 2020 due to accusations that Kadhimi — in his role as director of the Iraqi National Intelligence Service since 2016, when he was appointed to the position at the height of the country’s war against the Islamic State (IS), which was officially declared defeated in Iraq in December 2017 — had collaborated with the United States in the January 2020 assassination of Iranian Gen. Qasem Soleimani and Iraqi militia leader Abu Mahdi al-Muhandis in Baghdad.

Many of the Iran-linked factions rivalling Sadr have brigades within the official government-salaried PMU, but they also have fighters and weapons that do not belong to any state entity.

Concerns as to what use the fighters and weapons of these non-state fighters might be put to — and what sort of effect this will have on Iraqi lives, regional stability and investment‚ continue to rise.