An IRGC-linked armed faction in Iraq has urged men across the country to take up arms against any US forces remaining after Dec. 31, claiming to have received tens of thousands of "calls" from citizens willing to help. 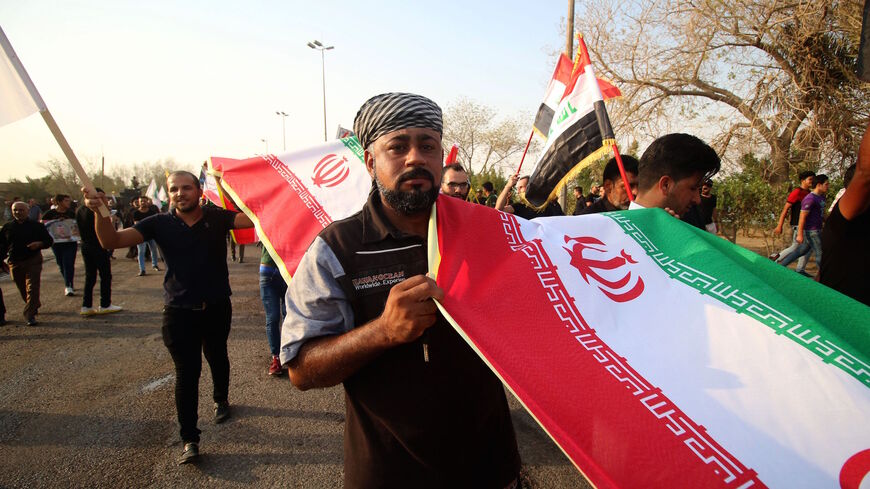 Demonstrators hold Iranian flags during a protest on Sept. 15, 2018, against the torching of the Iranian Consulate and the Hashed al-Shaabi party (Popular Mobilization) headquarters during recent protests in the southern Iraqi city of Basra. - HAIDAR MOHAMMED ALI/AFP via Getty Images

ERBIL — Little more than a month prior to the official end to the US “combat mission” in Iraq, an Iran-linked armed group has called for “volunteers” to fight any forces remaining post-midnight Dec. 31.

A man known as Abu Ala al-Walai, commander of Kataib Sayyid al-Shuhada (KSS), on Nov. 19 announced a call for volunteers to fight the “US occupation” should troops fail to leave.

US President Joe Biden had in July announced after meetings with Iraqi Prime Minister Mustafa al-Kadhimi that US forces in Iraq would “continue to train, to assist, to help and to deal with” the Islamic State (IS), but that they would no longer be “by the end of the year in a combat mission.”

KSS spokesman Sheikh Kadhim al-Fertousi claimed to Al-Monitor on Nov. 24 that “so far we already have 45,000” calls from would-be volunteers for the post-December fight against US forces should they remain in the country.

“We also received calls from organizations that also want to join, each of which has about 1,000 to 1,500” people, he said. “Some used to fight alongside [popular Shiite cleric Muqtada al-] Sadr, while others fought in the past against IS.”

He said they had received several requests from women who also wanted to volunteer, but “we don’t usually accept this sort of request.”

The offer, he said, had nonetheless “lifted our spirits.”

KSS was formed in 2013, initially fighting alongside Syrian government forces against armed opposition groups there. They began fighting against IS in Iraq starting in 2014.

KSS fighters just across the Iraqi border in Syria have been targeted in at least two attacks over the past year by US forces — in February in the first known offensive military action taken by the Joe Biden administration declaredly in retaliation for rocket attacks on bases hosting international forces, and in June.

Both attacks killed KSS fighters, whose bodies were brought back into Iraq through the Qaim border crossing in Iraq’s western Anbar province. Kataib Hezbollah has a heavy presence in that border area as well.

Fighters from the “muqawama” (Iran-led regional resistance) factions interviewed in Qaim by this journalist in previous years who regularly crossed into Syria claimed they were protecting Iraq even if they were on the other side of the border.

The KSS spokesman stressed that “we are not hostile to non-Iraqis” and “we understand the importance of having good relations” with other countries.

Meanwhile, as reported by Al-Ahad media outlet, an Iranian delegation met on Nov. 24 with the head of the Iraqi Judicial Council, Faiq Zaidan, on an investigation into what it calls “the airport crime.”

Al-Ahad TV is run by Asaib Ahl al-Haq (AAH), another Iran-linked group of the muqawama. AAH, like KKS, has units within the government-incorporated PMU.

It was, however, designated a Foreign Terrorist Organization by the US State Department in January 2020.

In recent days, Al-Ahad social media accounts have focused a great deal also on student protests in Sulaimaniyah in the Kurdistan Region of Iraq (KRI), railing against international community money allegedly being monopolized by the two main families in the region with little spent on the population and its needs.

Many Sunni Arabs sought refuge in the KRI during the IS occupation of their land, and some have remained. Iraq’s Kurdish and Sunni Arab communities in the country have grown closer in recent years, while friction remains between much of the Sunni Arab community and Iran-linked armed groups, who continue to occupy areas such as the entire town of Jurf al-Sakr (now known as Jurf al-Nasr), the populations of which are still displaced many years after IS was pushed out.

PMU commanders have told this journalist in previous years that the local population “will never be allowed to return” to the town in the Babil province due to its location near the Shiite holy city of Karbala — to which millions make pilgrimages every year — and possible security risks.

The United States currently has forces in Baghdad, at the Ain al-Asad air base in the Sunni Arab province of Anbar, and at a base in the KRI regional capital, Erbil.

Ain al-Asad was targeted by a major Iranian missile attack in January 2020 shortly after the US drone killing of Soleimani and Muhandis.

AAH and KSS were both accused earlier this year of involvement in an attack in February on the Erbil International Airport adjacent to the base and on residential areas of the city.

In recent weeks, an apparently dismal showing by the PMU-linked Fatah Alliance in the Oct. 10 elections and claims of voter fraud led to protests in Baghdad that were supported by Iran-linked armed and political factions.

The Fatah Alliance lost a few dozen seats in parliament, though results are not yet final and some recounts are underway.

At least two protestors were reportedly killed and over 100 among both protestors and security forces were injured in clashes during the protests.

Afterward, an assassination attempt was perpetrated against the Iraqi prime minister for which no group has yet taken responsibility, leading to a spike in tension.

The Nov. 7 drone attack on Kadhimi's residence reportedly injured several of his bodyguards, but he went on television shortly afterward to say that he was fine.

KSS spokesman Fertousi claimed that the attack on the prime minister’s home had been staged, calling it “a charade” to “silence civilians who died as a result of an attack on the demonstrations” against the voting results.

He also stated that his group also had evidence of the United States tampering with the elections and that the results should be canceled.

On Nov. 23, the US Embassy in Baghdad issued a travel advisory update urging its citizens to avoid all travel to Iraq “due to terrorism, kidnapping, armed conflict, civil unrest, COVID-19, and Mission Iraq’s limited capacity to provide support.”

Lt. Col. Joel Harper, a spokesman for the US-led international coalition, noted in an email to Al-Monitor on Nov. 24 that: “At the invitation of the Republic of Iraq, the Coalition is completing its transition to a non-combat mission, and will soon operate in Iraq an advise, assist, and enable role. On Nov. 4, parties of the Coalition and Iraqi military discussed the status of the transition during a Military Technical Talk” and that they had “noted the successful divestment during the preceding months of more than 1,800 armored gun trucks, cranes, water trucks, and other vehicles, which has increased the ISF’s mobility and capacity to protect the citizens of Iraq from” IS.

He added that the “next Military Technical Talk is currently scheduled for Dec. 9, 2021” and, “We always retain the right to defend Coalition and partner forces against any threat, and will do everything within our power to protect those forces. We will not hesitate to defend ourselves against any malign actors.”