Airstrikes on both sides of the Iraqi-Syrian border near Qaim conducted by the United States were followed by retaliatory strikes by Iran-linked groups against a Kurdish-led SDF base housing coalition forces in eastern Syria. 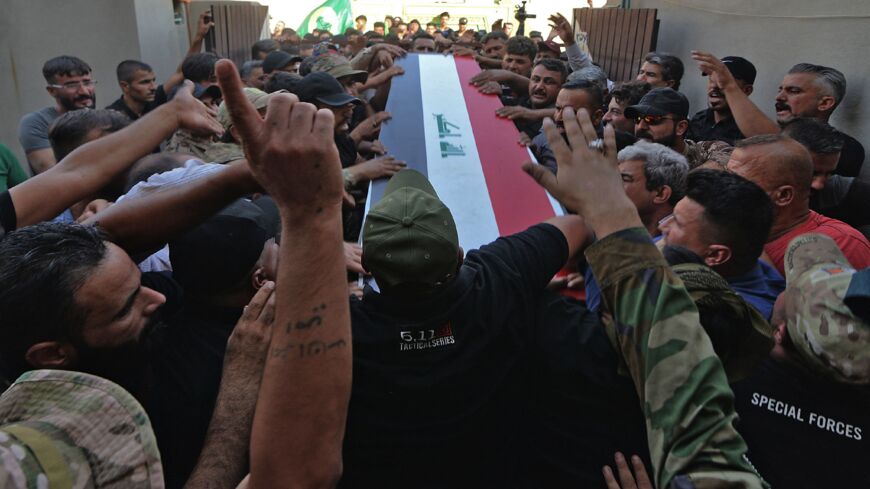 Iraqi mourners attend the funeral of a fighter of the Hashid Shaabi paramilitary alliance following US airstrikes on the Syrian-Iraqi border, on June 28, 2021, in the northern Ninevah province. Iraq's Prime Minister Mustafa al-Kadhimi today condemned an overnight US airstrike against Iran-backed armed groups, which a monitor said killed at least seven fighters. The Pentagon said it had conducted retaliatory targeted airstrikes against "facilities used by Iran-backed militia groups" on the Iraq-Syria border. - ZAID AL-OBEIDI/AFP via Getty Images

On June 29, four coffins draped in the Iraqi flag were carried through central Baghdad streets packed with people taking part in a symbolic funeral procession protest.

US airstrikes on June 27 near the city of Qaim on the country’s border with Syria killed four members of what a Pentagon spokesperson said were “Iran-backed militia groups responsible for the series of recent attacks against facilities housing US personnel in Iraq.”

The Shia-led, government-incorporated Popular Mobilization Units (PMU) held the procession not far from the Green Zone, where many embassies and government offices are located.

The airstrikes sparked accusations of violating Iraqi sovereignty. Though the outcry was less massive than that seen in January 2020 when a US drone strike killed Iranian Maj. Gen. Qasem Soleimani and Iran-linked Iraqi commander Abu Mahdi al-Muhandis, concerns about Iraq being caught up in a wider conflict between the United States and Iran were widespread.

The US Department of Defense issued a statement the same evening as the strikes took place, saying the strikes "targeted operational and weapons storage facilities at two locations in Syria and one location in Iraq, both of which lie close to the border between those countries. Several Iran-backed militia groups, including Kataib Hezbollah (KH) and Kataib Sayyid al-Shuhada (KSS), used these facilities.”

The military spokesperson for the Iraqi prime minister announced via Twitter on the morning of June 28, “We condemn the US air attack that targeted a site on the Iraqi-Syrian border last night, which represents a blatant and unacceptable violation of Iraqi sovereignty and Iraqi national security,” stressing it was against international conventions.

An Iraqi national security council meeting was held the same day, focusing on the strikes. The council also discussed the dire electricity crisis the country is suffering from amid an intense heatwave and attacks on power lines and stations that have been attributed to Islamic State (IS) remnants.

Iraq imports a significant amount of electricity from Iran and has continued to receive US waivers to import energy from it since sanctions were reimposed on Iran in 2018. A project was discussed at a meeting Sunday between Iraq, Jordan and Egypt that will send Egyptian surplus electricity to Iraq, expected to be up and running within the next 18 months.

The United States has been drawing down its forces in Iraq for more than a year and is in discussions about the logistics for completing its withdrawal. Most of the US forces still in Iraq are at the Ain al-Asad base in Iraq’s western, Sunni-majority Anbar province or at one in Erbil in the Kurdistan Region of Iraq (KRI) in the north.

These bases and convoys carrying supplies for bases hosting coalition forces are frequently subject to attacks often claimed by shadowy groups thought to be linked to larger Iran-backed ones.

"We always reserve the right to respond at a time and place of our choosing to protect and defend our people; Sunday night was the right moment to act," McNulty added. "The president determined that taking this action would protect US personnel and that these strikes were both necessary to address the threat and appropriately limited in scope."

"The United States does not seek conflict with Iran, but we are well postured to defend our forces around the region and respond to any threats or attacks," she wrote. "Through these and other means, we seek to make clear to Iran and Iran-backed militia groups that there will be serious consequences if they continue to attack, or to arm, fund and train militia groups that attack our people.”

On June 28, hours after the US airstrike in the evening of June 27 farther south on both sides of the Qaim-Albu Kamal border crossing, several rockets hit a base near al-Omar oil field across the border in the eastern part of Syria's Deir ez-Zor region, currently under the control of the US-backed, Kurdish-led Syrian Democratic Forces (SDF) where coalition forces are stationed.

West of the SDF area is territory officially under the Syrian central government, but for years much of it has been under Iran-backed militias’ de facto control.

Coalition forces responded by firing back at positions held by the Iran-linked armed groups near the city of al-Mayadeen, according to the website Deir ez-Zor 24. The SDF also shot back at positions across the Euphrates River from the town of al-Shuhail, according to a website run by a native of the town who is now a refugee in Europe, Omar Abu Layla.

Meanwhile, heightened tension has also been seen in recent weeks between Iraq’s Kurdish region and the Kurdish-led SDF across the border in Syria.

KRI officials have since last autumn been speaking out more about wanting the Kurdistan Workers Party (PKK) — which some leaders in the SDF spent decades in prior to the formation of the SDF and which is considered a terrorist organization by the United States, the EU and Turkey — out of Iraq’s Kurdish autonomous region.

The PKK and Iran-backed militias have meanwhile grown closer, including in the Sinjar region in northwestern Iraq along the Syria border.

Some 300 kilometers (186 miles) southwest of Albu Kamal in Syria’s eastern Deir ez-Zor region is al-Tanf garrison, where US-backed Syrian opposition forces called Maghawir al-Thawra (MaT) are located near the country’s borders with both Iraq and Jordan.

A source this journalist has known for years who has been to al-Tanf in recent months and has at times worked closely with the commander of MaT, former Syrian regime officer Mohannad al-Talaa, told her in an in-person interview in mid-June that “the US use al-Tanf to strike Iranian (linked) positions in Albu Kamal” and other areas in eastern Syria.

Though both MaT and the SDF are US-backed, some of the Arab fighters in al-Tanf from Deir ez-Zor have close family members who are currently refugees in Turkey and Jordan and who refuse to return to the native province as long as the Kurdish-led SDF is in control of the Arab-majority province.

Both the SDF and MaT are, however, considered “enemies” of Iran-backed armed groups in Syria.