Armed factions in Iraq with links to Iran have increased accusations against Kurds in the country’s autonomous region and may have been behind some recent attacks on them. 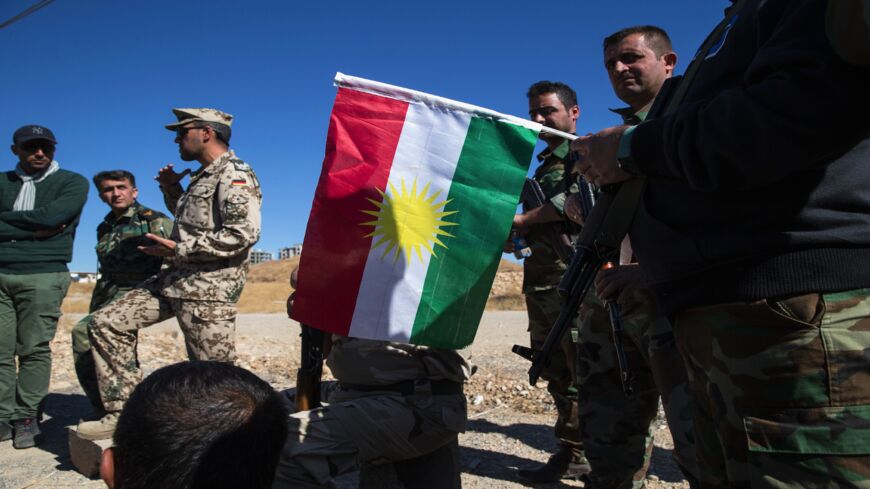 Kurdish peshmerga forces learn battlefield first aid techniques from a military doctor during a medical training session on Nov. 3, 2015, in Erbil, Iraq. The Kurdish troops, many of them frontline veterans, are rotated in for the 5-week program. Coalition forces from Europe and the United States are training peshmerga and Iraqi army troops in the fight against the Islamic State. - John Moore/Getty Images

BAGHDAD — Iran-linked Shiite armed groups operating in Iraq have recently stepped up their messaging against, and possibly attacks on, forces operating in the Kurdistan Region of Iraq (KRI) amid accusations of their enjoying overly close relations with the United States.

The Iran-linked "muqawama" (resistance) factions are also unhappy about the close ties between the Kurdistan Regional Government (KRG) and Turkey, in part linked to these factions’ increasingly close relations with the Kurdistan Workers Party (PKK) in the Sinjar region in northwestern Iraq.

Some attacks on peshmerga forces in recent months may have been conducted by these groups, as Islamic State (IS) attacks on forces operating under the KRG also continue.

Eight Katyusha rockets were fired after 7 p.m. on Jan. 7 at Kurdish peshmerga forces in Pirde near Altun Kupri, a town that lies about 40 kilometers northwest of the city of Kirkuk on the main road between Erbil and Baghdad. The rockets were shot from the eastern and southern sides of their targets.

A few days before, a peshmerga fighter had been shot and injured by an unidentified gunman in another village in the Kirkuk province.

Different forces operate in the oil-rich province, which is disputed between the central government in Baghdad and the KRI capital, Erbil.

Altun Kupri has a mixed Turkmen, Kurdish and Arab population. Though most attacks on security forces in Iraq tend to be attributed by default to IS cells, security sources operating in the area have said that armed groups close to Iran were suspected of involvement in the Dec. 7 incident and others.

A February 2021 attack on Erbil, in which over a dozen rockets were shot at a base hosting US-led coalition forces at the Erbil International Airport and residential areas of the city, was at that time claimed by a shadowy group that many say is likely to be a front group for other Iran-linked armed groups with political wings in Baghdad. Two people were killed and over a dozen others were injured.

Two months later, there was the first known explosives-laden drone attack on US forces in Erbil. Iran-linked groups praised the attack but did not claim it. Other drone attacks have occurred on the airport in the intervening months.

Before that, in October 2020, supporters of Iran-linked armed factions operating in Iraq burned down the Baghdad headquarters of the Kurdistan Democratic Party (KDP). The KDP is the largest political party from the autonomous region and maintains close trade relations with Iraq’s northern neighbor, Turkey.

Some of those accompanying the men setting fire to the premises held up posters of Iran’s Islamic Revolutionary Guard Corps (IRGC) commander Qasem Soleimani and Abu Mahdi al-Muhandis, who were killed in a US drone strike outside the Baghdad airport in January 2020.

IRGC-linked factions have accused the KRG of complicity in the assassination.

Meanwhile, a senior member of the State of Law Coalition on Monday called Sunnis and Kurds responsible for “a rift among the Shiites,” while Abu Ali al-Askari, a spokesman for the armed, IRGC-linked Kataib Hezbollah, warned that “Iraq could see tough days and all will lose.”

In late 2021, former Iraqi Interior Minister Baqir Jabr al-Zubaidi claimed that the United States had “installed missiles in a secret camp in the mountains of the Kurdistan Region of Iraq.”

Abbas al-Zaidi, from the Kataib Sayyid al-Shuhada (KSS) political office, sent this journalist a message on Dec. 22 after Zubaidi’s statement, railing against these alleged secret facilities and wondering whether “Erbil has become an American base for the occupation of Iraq” and how they can "know or determine [what is in] the base of Ain al-Asad [in the Sunni Arab-majority province Anbar]” after the “news.”

KSS was one of the groups initially blamed for the February 2021 attack on Erbil. It is an armed group close to the IRGC but which has been incorporated into Iraq’s government-salaried Popular Mobilization Units. It has been targeted by US airstrikes near the border between Iraq and Syria.

Zaidi had previously warned in a June 2021 message to this journalist after one of these attacks that the KRG would receive “not a small punishment” due to “the blood of our sons and martyrs who were targeted on the borders last night by the American occupation, to which [the KRG] provides all means of support to kill the sons of Iraq.”

A source from the US-led international coalition on Jan. 12 responded to a request for clarification on its presence in the KRI from Al-Monitor by stating the following: “The Coalition has ended its combat role in Iraq, effective Dec. 9, 2021. The Coalition no longer has its own bases in Iraq and recently hosted a delegation of Iraqi military and diplomatic officials who viewed our transition to a force that advises, assists and enables Iraqi forces to maintain the enduring defeat.”

The coalition, meanwhile, continues to provide hundreds of millions of dollars in support every year to Iraq's security forces and pays the salaries of the units of some peshmerga forces.

KRI local media outlet Rudaw reported last year that “there are around 30,000 peshmerga fighters in 13 brigades who receive their salaries from US funding. The US has provided military and financial aid, as well as training, to peshmerga forces since 2014.”

A request sent to a coalition spokesman for further information on this funding and requirements for it had not been answered by the time of publication. However, it is widely known that the United States has for decades maintained close relations with Kurdish regional forces and the government in Erbil.

A new US Consulate in Erbil, billed as the “biggest” in the world, was completed “structurally” in September 2021.

Iran-linked groups have long called the sprawling US Embassy in Baghdad a “cove of spies” and are likely to consider the enormous new consulate in the KRI the same.