Joint operations between Iraqi Counterterrorism Services and their counterparts in some areas of the Kurdistan Region continue to target Islamic State cells, while other armed groups attack Erbil. 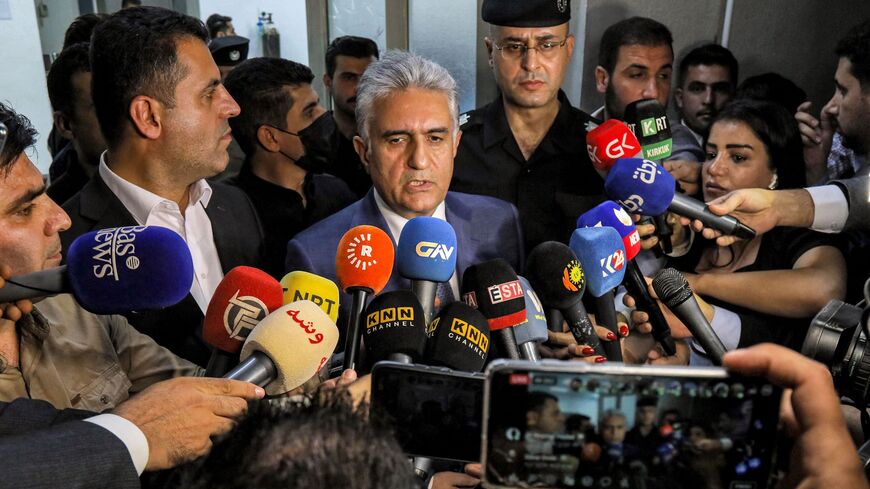 Rebar Ahmed (C), Interior Minister of Iraqi Kurdistan's Regional Government, speaks during a press conference after an overnight attack in Erbil, the capital of the northern Iraqi autonomous region, on June 8, 2022. - Three people were wounded after an armed drone struck a road in the suburbs, security services said. - SAFIN HAMED/AFP via Getty Images

As discord at other levels grows more acute between the central government of Iraq and the Kurdistan Regional Government (KRG), coordination in counterterrorism against alleged Islamic State (IS) operatives continues.

Gen. Yehia Rasoul, the spokesman for the commander-in-chief of Iraq’s armed forces, announced in a June 8 tweet that the Iraqi Counterterrorism Services (CTS) in collaboration with Asayish in the Sulaimaniyah area of the Kurdistan Region of Iraq (KRI) had arrested three men from the “Takfiri gangs of IS.”

The Asayish are the security and primary intelligence services of the Kurdistan Region of Iraq.

Rasoul did not state exactly when or where these arrests took place, nor who the men arrested were or why they were seen as important targets. Requests for further information had not been answered by the time of publication. Photos of the operation showed the forces amid palm groves.

Attempts to overcome disagreements and longstanding grievances between the larger Erbil-based Kurdistan Democratic Party (KDP) and the smaller Suleymaniyah-based Patriotic Union of Kurdistan (PUK), the two largest parties in the KRI, continue amid multiple stumbling blocks. Both parties retain their own intelligence and peshmerga units. The KDP has historically had closer ties to Turkey, while the PUK has closer ties to Iran.

Meanwhile, attacks continue on the Kurdistan Region from both Iran and armed groups active in the area. These attacks, notably, tend to target areas in the Erbil region and not those in Sulaimaniyah.

A KRSC statement issued the next day said, “The terrorist attack that occurred last night in Erbil is a continuation of a campaign of attacks intended to put pressure on the Kurdistan Region.”

It denied the claim of an Israeli death, saying, “Those who make such false claims do so with the intent of concealing and diverting from their own failures and shortcomings, with an inability to maintain security in their own capitals and cities projected outwards.”

The Iraqi parliament recently passed a law making any contact with Israeli officials or the attendance of conferences with links to Israel an even more serious crime than the already severe 1969 law spelled out.

KH is an Iran-linked armed group that has multiple government-salaried brigades with the Popular Mobilization Units (PMU) as well as thousands of fighters outside of the brigades. None of the official brigades are deployed to the area from where the attack drones were reportedly launched. A member of Iraq’s intelligence services told Al-Monitor, “I do not think there are any Kataib Hezbollah in that area.”

KH is part of the region-wide network of armed groups that claim to be fighting as a religious duty against Israel, calling themselves the muqawama, or resistance factions. They typically do not respect national borders, and their domestic and cross-border activities continue largely unabated.

The commander-in-chief of the armed forces is Prime Minister Mustafa al-Kadhimi. The CTS answer directly to his office and were tasked with arresting members of independent Iran-linked armed groups on a few occasions seen as an attempt to crack down on these groups.

The men in these factions arrested by the CTS after Kadhimi took office in May 2020, however, were often later released, allegedly due to external pressure.

Kadhimi himself was targeted in November last year by what seems to be an assassination attempt, with many placing the blame on KH.

The US-led international coalition against IS – which officially ended its combat mission in Iraq late last year – provided significant training and support to the CTS over several years. It notably but discreetly continued this support for the CTS even when it stopped all training activities in the country in early 2020 following an outcry sparked by the killing of Iranian Gen. Qasem Soleimani and KH leader Abu Mahdi al-Muhandis in a US drone strike near the Baghdad airport.

The coalition currently retains advisors and others at bases in Baghdad, western Anbar, and Erbil, even as Iran-backed groups continue to want them out entirely.

KRG officials have complained in recent years about central government inaction against Iran-linked armed groups as well as against the Kurdistan Workers Party (PKK), noting that IS is not the only danger to stability and the local population.

On May 28, the media outlet Kurdistan24 reported, “Two rockets were fired by the Kurdistan Workers' Party (PKK) at Ardanay village in Bamarni, killing the two children and injuring two adult males” according to the Kurdistan Region's Directorate General of Counter Terrorism (CTD).

Joint counterterrorism operations between Baghdad and the KRG, however, for the moment seem to focus only on IS cells and the growing drug trade.

Other groups involved in acts of terror against civilians and official military forces of the central government and the KRG are, for the moment, either seen as less of a priority or as too politically inconvenient to be called by that name.

by Ismail BELLAOUALI with Philippe AGRET in Rabat and Marie GIFFARD in Madrid | AFP | Jun 24, 2022
END_OF_DOCUMENT_TOKEN_TO_BE_REPLACED