Tension is mounting between Iran-linked armed factions and the Kurdistan Region of Iraq after repeated attacks on the largest Kurdish party office in the capital and threats. 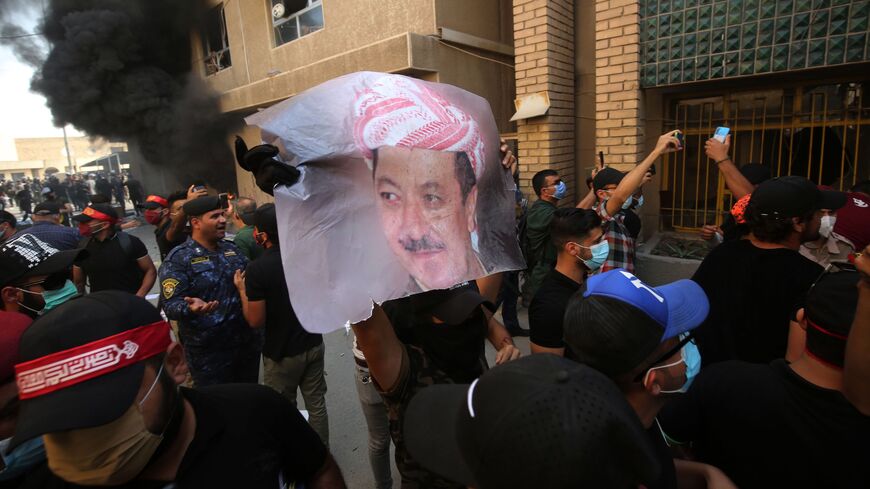 Iraqi demonstrators, supporters of the pro-Iranian Hashed al Shaabi, tear up a portrait of Masoud Barzani, former leader of the Kurdistan Democratic Party, as they burn and ransack the party's headquarters in the capital Baghdad on Oct. 17, 2020. - AHMAD AL-RUBAYE/AFP via Getty Images

BAGHDAD — Flickering orange flames could be seen against the night sky shortly after midnight on March 28 through the mass of yelling men who had rushed to the main office of the Kurdistan Democratic Party (KDP) in the Iraqi capital.

On April 3, several rockets struck the Bashiqa base, which hosts Turkish forces and is located in Iraq’s northern Nineveh province near the Kurdistan Region of Iraq, for the second time in less than a week.

Both attacks were either claimed or presumed to be done by Iraqi armed factions linked to Iran’s Islamic Revolutionary Guards Corps (IRGC).

By the early morning hours of March 28, the angry mob of supporters of Iran-linked groups had done so much damage to both the KDP office in Baghdad and public trust in the ability of the security forces to prevent such violence that the KDP decided simply to demolish the office and suspend its activities in the Iraqi capital.

The KDP is the most prominent political party in the autonomous region in the northern part of the country, with the largest number of lawmakers of any Kurdish party in both the central government’s parliament in Baghdad and the regional one in Erbil.

The office was ransacked and possibly looted in the March 28 attack. Cellphone footage from the rioters showed men rifling through papers and taking some with them.

A man who climbed onto the roof of the office during the attack was reportedly seen waving a Kataib Hezbollah flag.

Kataib Hezbollah has three brigades within the Popular Mobilization Units (PMU) but largely operates outside of Iraqi government control. Some of its members have been suspected of involvement in a number of serious attacks on or threats to government officials, including an assassination attempt on the prime minister in November 2021.

Most analysts say the group is linked to Iran’s Islamic Revolutionary Guard Corps. It is part of the Shiite "muqawama," Iran-linked resistance factions, and was designated a terrorist group by the United States in 2009.

The March 28 attack was neither the first on that KDP office nor a surprise after months of threats against and attacks on the Kurdistan Region of Iraq in general and the KDP in particular.

At least a dozen ballistic missiles had been shot at outlying ares of the regional capital Erbil in the early morning hours of March 13. The attack was by the IRGC, which claimed it had hit a “strategic center” for Israeli spies.

The Baghdad office of the KDP had previously been attacked and set on fire in October 2020. It was located in an area with offices of various militia factions and a multitude of billboards extolling the virtues of their "martyrs" and leaders, visible from the windows of trendy cafes and pricey restaurants.

The Sabereen News Telegram channel, mostly seen as a mouthpiece for Iraq’s muqawama factions, called March 27 for all such factions to attack the KDP office after a tweet deemed offensive the Shiite religious leaders by a Kurdish former parliamentary candidate.

Sabereen News first appeared in January 2020, only a week after a US drone strike killed IRGC leader Qasem Soleimani and militia commander Abu Mahdi al-Muhandis on Jan. 3, 2020. Armed factions linked to the IRGC had immediately vowed revenge for the attack and billboards around the capital repeat the message.

Less than a week before the 2020 drone strike, US airstrikes on Kataib Hezbollah positions in Iraq and Syria on Dec. 29, 2019, killed at least 25, followed by an attack by militia supporters on the US Embassy two days later.

According to the Washington Institute for Near East Policy, the video claims that the “Kurdish nation’s anger toward the ruling oligarchy became clearer than ever last year” and that Soleimani and Muhandis had helped the Peshmerga while HHN had “always defended the Kurdish people’s legitimate rights" and “treats the people of Erbil and Sulaymaniyah the same as the people of Basra and Nasiriyah.”

Basra and Nasiriyah are two of the largest cities in Iraq’s Shiite-dominated south. Though anti-Iran slogans are often chanted at demonstrations — especially during the late 2019 protests in which hundreds were killed, forcing the prime minister at the time to resign — Iran-linked militias draw many of their fighters from these areas, in part due to high unemployment rates and few opportunities for youths.

Al-Monitor reported in January amid a string of attacks on KRG forces, “The Iran-linked 'muqawama' (resistance) factions are also unhappy about the close ties between the Kurdistan Regional Government (KRG) and Turkey, in part linked to these factions’ increasingly close relations with the Kurdistan Workers Party (PKK) in the Sinjar region in northwestern Iraq.”

Prior to the latest attacks on the base housing Turkish forces in the Nineveh province, over 15 rockets were reportedly shot at the same base following an increase in collaboration between Turkey and the Iraqi military that in January led to the arrest of several fighters from a local Yazidi armed group, the Sinjar Resistance Units (YBS), supported by the PKK, from whom they have received training, weaponry and ideological instruction.

Turkey — which alongside the United States and EU has designated the PKK a terrorist organization — has conducted numerous attacks on what it has said are PKK targets inside northern Iraq, including in the Kurdistan Region.

KDP officials have in the past few years increasingly spoken out against the PKK presence, while IRGC factions have increased their collaboration with the group.

The YBS remain allied with the PKK but have become part of the Iraqi government-salaried and Shiite-led PMU, some factions of which are also part of the muqawama.

The Washington Institute for Near East Policy noted in a March 21 brief analysis that last month's HHN Kurdish-language video claimed that the KDP-led government in Erbil “bets on the wrong horse” and that it “used to be Saddam’s ally but did not learn the lesson from history.”