At least three rockets landed near a residence of the Iraqi parliament speaker in his native Anbar region on Tuesday as political wrangling, disappearances and threats from Iran-linked militias continue. 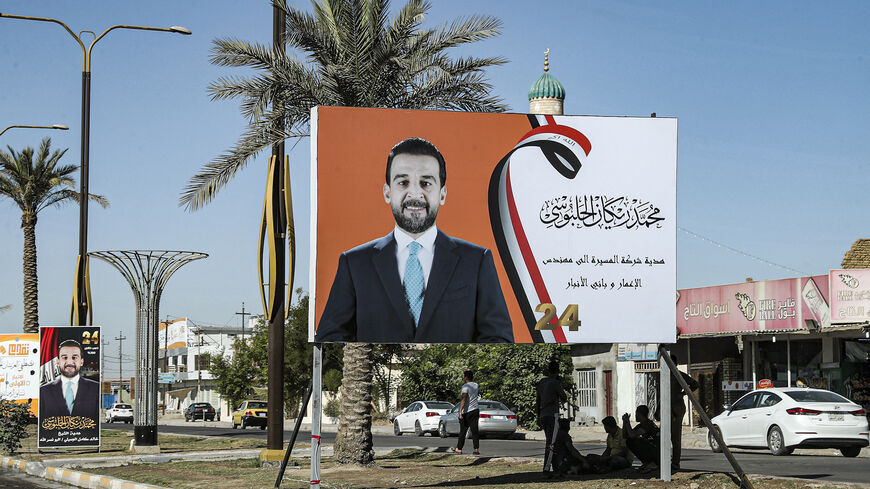 This picture taken on Sept. 26, 2021, shows an electoral campaign billboard ahead of Iraq's early legislative elections, depicting current parliament speaker Mohammed al-Halbusi, along the side of a road in the city of Ramadi, the capital of Iraq's central Anbar governorate. - SABAH ARAR/AFP via Getty Images

BAGHDAD — Iraqi parliament speaker Mohammed al-Halbusi’s residence, as well as other areas in his native district of Karma, were targeted by at least three rockets late Tuesday night in what appears to be the latest in a long string of attacks by Iran-linked armed factions.

Karma, sometimes spelled Garma or al-Karmah, is in the eastern part of Anbar province and is less than 50 kilometers (31 miles) west of Baghdad.

The attack happened hours after the Federal Court approved Halbusi’s re-election at the head of the country’s legislative body, as wrangling continued over the makeup of the next government coalition.

Halbusi’s party got the largest number of votes among Sunni factions in the October elections.

Though a video was circulated in which men with their faces covered and going by the name of Ahl al-Sunnah wal-Jama'ah were seen threatening Halbusi for allegedly backing “normalization of ties with Israel,” many scoffed at the unusual way the young men spoke and claimed it was a badly executed attempt to foist the blame for the attack on Sunni Islamist factions.

Halbusi has been repeatedly threatened by Iran-linked factions and those close to them, both openly and opaquely. He was not, however, reportedly in the area at the time.

One source claimed to this journalist that Kataib Hezbollah (KH) operatives "used a front loader truck breaching a gap in the security berm surrounding Karma earlier today (Jan. 25) in a clear sign of possible targeting after their tan militia trucks were observed in the area.”

Like other attacks on both the Green Zone and elsewhere earlier this month, the three missiles on Tuesday evening injured a child and another civilian but did not harm those most assume were their intended targets.

A woman and child had been injured on Jan. 16 when Kurdish-owned banks in Baghdad were targeted by attacks using explosives. Iran-linked armed groups had recently increased threats against and attacks on the Kurdistan Region of Iraq and those associated with it.

Another woman and child had been injured a few days before an attack by these groups on Baghdad’s heavily fortified Green Zone occurred on Jan. 13.

Some of the Shiite armed factions are enraged by what they see as not enough representation in government institutions and/or respect for their losses as part of the 2014-2017 fight against the Islamic State (IS) as part of the Popular Mobilization Units (PMU).

This journalist reported from multiple active fronts during those years, including in eastern Anbar in 2015 during which she accompanied non-local Shiite PMU.

Several of the factions have been accused of major human rights abuses and possible war crimes in some areas.

Soleimani and Muhandis were killed in a US drone strike just outside the Baghdad airport in January 2020, and Iran-linked factions and others vowed revenge.

The head of Baghdad security, who militia factions accuse of involvement in the assassination, was reportedly kidnapped earlier this week, a security source who spoke on condition of anonymity told this journalist.

He said that the man had been taken along the road to the airport.

Official security sources contacted by Al-Monitor for confirmation or denial had not responded by the time of publication.

Meanwhile, over four years after the last city held by IS was retaken by Iraqi security forces with international coalition assistance in western Anbar, many in the Sunni-dominant province are still demanding to know what happened to the over 1,000 mostly men and boys from the region that went missing.

Many families in Anbar were left impoverished by the loss of their breadwinners. Areas of land are also still today “occupied” by the Shiite armed factions, some of which have brigades incorporated into the government-salaried PMU but which are generally seen as operating outside state authority.

KH, in particular, is seen as controlling parts of the western Anbar border with Syria and crossing in and out of it at will, while claiming for its own areas that had previously been used by local residents for farming.

KH has three brigades in the PMU, two of which are deployed to that border area and one in the town of Jurf al-Sakr, which after being retaken from IS was renamed Jurf al-Nasr.

The native Sunni inhabitants of Jurf al-Sakr are still prevented from returning, and PMU officials have in the past told this journalist that they will never be allowed to return.

In a September 2018 interview with this journalist in Baghdad shortly before he became parliament speaker, when he was still governor of Anbar, Halbusi said that he suspected KH of involvement in the disappearance of hundreds of men and boys from Anbar.

With regard to “the incident in Razaza, we asked the prime minister and he said these groups are not on the official list” of the PMU, Halbusi said. “So where do they come from? The moon? I want to know who is on the ground.”

“Nobody can tell us where they are. But we have heard that they are in Jurf al-Sakhar” in neighboring Babil province, he said, positing that KH most likely knew what had happened to the men.

He had then lamented the confusion of different, overlapping security forces on the ground in his province, resulting in waste, corruption and obstacles to investment. Attempts have been made in recent weeks to address a similar issue in Sinjar, over a year after an agreement to do so had been signed.

Halbusi had added then, “We need to cut the transfer [of armed fighters and weapons] from Iraq to Syria,” apparently in reference to KH and other factions linked to the Iran-led "muqawama" (resistance).

A few hours after Tuesday evening’s attack, Halbusi tweeted two photos of the visibly frightened, bandaged-up young boy injured, writing: “My son, I apologize to you, and I promise you, we will continue with our cause so that hope is achieved in a country where justice prevails, injustice is removed, and the forces of terrorism and statelessness are defeated.”

The militia-linked Sabereen News replied and appeared to imply that the parliament speaker was “hiding” behind “money and children.”