Anbar governor wants police boosted and military back on bases

Local authorities in Iraq's western province of Anbar have demanded that international forces step in to guard the province's border with Syria, given the various competing forces on both sides. 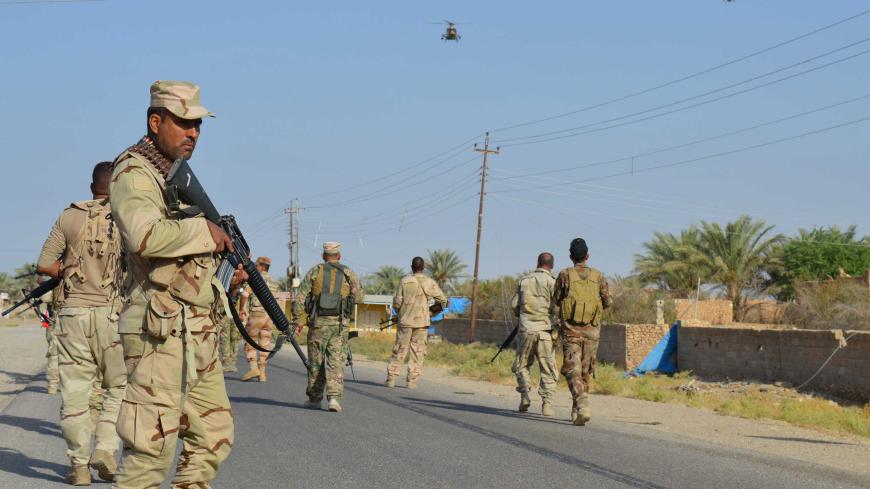 BAGHDAD — The governor of Anbar, the country’s largest and westernmost province, has called for the Iraqi military to “go back to their bases” to enable the return of normality to the province.

Gov. Mohamed al-Halbusi, a candidate for parliamentary speaker, said that police should resume control of all checkpoints in Anbar.

Despite relatively stable security in the Sunni-majority province — the last Iraqi province to have all its major towns liberated from the Islamic State (IS), in late 2017 — in recent weeks IS fighters have attacked checkpoints and infiltrated Iraqi territory only to be later killed by border police.

Some sources are wary of discussing other security incidents, especially ones involving non-local Popular Mobilization Units (PMU). One such incident, as witnessed by members of a local PMU in al-Qaim on Aug. 23, involved several individuals being handcuffed and blindfolded “after being arrested by Kataib Hezbollah.” During an interview with Al-Monitor in Erbil, a security official from the area received a phone call detailing the incident, but he declined to comment. Al-Monitor followed up with the security official, but he had no additional details on what exactly had occurred.

The security official also showed Al-Monitor photos of corpses of alleged IS fighters, some with Central Asian features and wearing military attire, who had been killed a few miles inside Iraqi territory in recent weeks by border forces.

The local PMU have repeatedly told Al-Monitor in reporting trips to al-Qaim that there is a precarious balance in Iraq between international coalition forces and the Iran-backed armed groups that cross the Syrian border to fight alongside the Bashar al-Assad regime and allied militias.

Meanwhile, a plethora of checkpoints manned by several different security forces are scattered throughout Anbar province, slowing movement and creating confusion regarding authorizations due to ineffective communication between the officers in charge.

Al-Monitor witnessed this repeatedly at the Mohammedi army checkpoint into the Badia and Jazeera region. In late June, army officers at the checkpoint told this correspondent that she needed the authorization of the commanding officer of the region before they could let her pass. This was in spite of the correspondent being accompanied by regional police sent by the Anbar police chief and having written authorization to pass from the Joint Operations Command. They also could not give her the phone number of the officer nor could they call him, resulting in a wait of several hours and the involvement of many people before being allowed to pass.

The proliferation of forces and excessive division of territory leads to confusion, additional expenses and waste in general, Gov. Halbusi said.

“I would like to open the road between Fallujah and Ramadi, for example, but now the two areas are split with different army officers commanding” each area, he told Al-Monitor during an interview at his Baghdad home. The army officers each “demand separate scanners, separate everything,” despite the two checkpoints being very close to each other.

Halbusi stressed that resolving this issue, soon after the formation of a new government, would be the key to much-needed investment in the area.

“I don’t have enough policemen,” he added, “but I feel that the new Iraqi government will correct this.”

Al-Monitor has reported on a trend seen in the neighboring Salahuddin province of police joining local PMU to fight IS and then not rejoining the Interior Ministry forces.

The leaders of the largest local PMU in al-Qaim, Aaly al-Furat and Kataib al-Hamza, were both former Interior Ministry employees: one in police intelligence and the other on the SWAT team.

With so many different forces in Iraq, the governor lamented that he does not have the power to investigate some issues in his own province.

“Do you remember when we had the incident in Baghdadi?" he asked, referring to an airstrike that killed the town’s police chief. "When I sent people there from my office, I was told this is a central government issue” and that he should not ask further questions.

He was told the same, he said, when various Iran-backed, Iraqi-led armed groups were attacked in Syria, allegedly by Israel, and the fighters — including foreigners — were brought across the border to the al-Qaim hospital to be treated.

With regard to “the incident in Razaza, we asked the prime minister and he said these groups are not on the official list” of the PMU, he said. “So where do they come from? The moon? I want to know who is on the ground.”

According to the Baghdad Post, “Some reports put the number of those who ‘disappeared’ from the Razaza checkpoint, which many Anbar internally displaced persons used to flee to Baghdad in 2015, at over 1,000.”

“Nobody can tell us where they are. But we have heard that they are in Jurf al-Sakhar,” in neighboring Babil province, he said, positing that Kataib Hezbollah has them or at least knows what happened to them.

Meanwhile, political wrangling has been fierce on whether or not the Fatah Alliance, under which Shiite-led PMU leaders are running, will be part of the new government brought in by the May 12 parliamentary elections.

​Halbusi noted that in any case, the Iraqi-Syrian border situation was a unique situation and that “we must make an agreement with the Syrian government and between the US and Russia” about “who will protect the line. We need Iraqi border forces but also international forces for a year or two. We need to cut the transfer [of armed fighters and weapons] from Iraq to Syria.”

He suggested something akin to “what they did in southern Lebanon,” in reference to the United Nations Interim Force in Lebanon, or UNIFIL, buffer-zone troops.

“We need international forces for a year or two” to ensure stability, given the multiple competing forces on the other side, he said.

“People are back from the camps and they are tired,” Halbusi said, adding that the view toward foreigners had also changed.

“Now most people in Anbar want foreign investors. They want jobs. After 2003, we had conflict with the US and other countries. We felt they took our country. Now we want joint ventures, we want partnerships, we want economic relationships,” he said, adding that Anbar has “many projects to invest in gas, phosphates, cement, the highway and agriculture around the [Euphrates] river.”

He said the UN Development Program "has a budget of $90 million” for the area. “They told me by letter and we have many details and they got financing for $28 million but so far they haven’t spent more than $5 million,” he said, despite his having spoken to them several times.

But there needs to be “normality,” he said. “I would like to see the police on the ground and the army on the bases, not at the checkpoints.”

“This is the normal situation. Police on the ground and the army and special forces behind,” he stressed, and not a plurality of forces that cannot effectively communicate with one another.

by Murielle KASPRZAK and Joseph SCHMID | AFP | May 26, 2022
END_OF_DOCUMENT_TOKEN_TO_BE_REPLACED