Anbar governor thanks PMUs, tells them to get out

The new governor of Anbar province faces critical challenges regarding providing services to the recently liberated area from the Islamic State and dealing with the Shiite Popular Mobilization Units coming from outside the province. 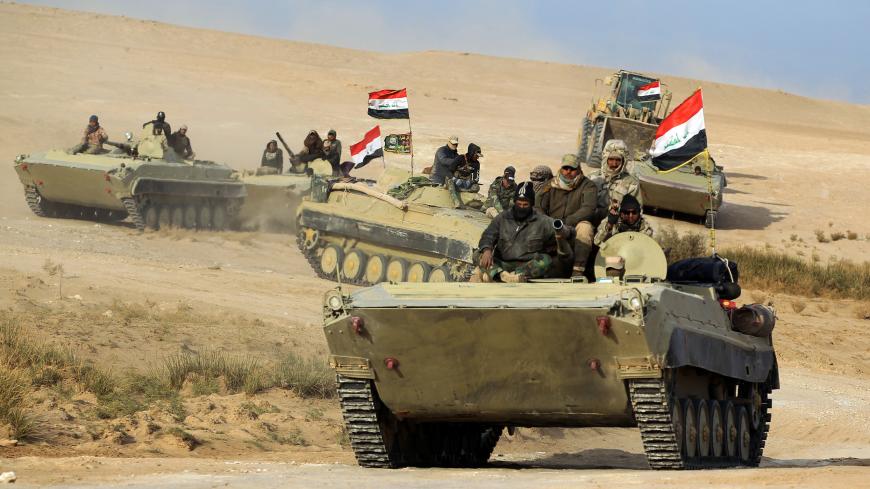 BAGHDAD — The governor of Anbar, Iraq’s largest and arguably most-insurgent-prone province, took office last fall just as the fight against the Islamic State (IS) was winding down. Mohamed al-Halbusi will now have to provide services to the heavily damaged province with what he considers woefully inadequate funding and steer it through the lead-up to parliamentary elections in May, with thousands of residents still displaced or missing.

In an interview with Al-Monitor at his home in Baghdad, he said that he will also have to deal with non-local Popular Mobilization Units (PMU), which were instrumental in the fight against IS but which remain despite local sentiment against their presence.

In his early 40s, small of stature and with an easy smile, Halbusi cuts a more personable figure than many Iraqi politicians. His social media pages show him meeting with constituents and public officials, in suits as well as more traditional blue dishdashas and a black leather bomber jacket, hair slicked back.

Halbusi, previously the head of the parliamentary Finance Committee, stressed that his region continues to be treated unfairly in terms of border regulations and budgetary matters, with inadequate funding for a province so heavily damaged by the war. He claims that new measures have been imposed that would affect only the border crossings recently reopened in Anbar and not those elsewhere, and that "if they are going to do something," they should do it "in Trebil and Basra and Diyala," and not only in Anbar province.

On Aug. 30, the border crossing at Trebil reopened after a closure of more than two years. Trebil is the primary crossing between Iraq and Jordan, a country where several Anbar local authorities and security officials told Al-Monitor they had moved their families to for security reasons. Seized by IS in June 2014, it continued to operate until July 2015.

Basra is the key southern seaport in an area heavily influenced by Shiite tribes, while the border crossing in Diyala provides access to Iran.

For new tariffs regulations, "they started in Anbar," the governor said. "The merchants in Basra follow the old" rules and thus have it easier.

In relation to the reopened border with Jordan, the province needs about two years for rehabilitation to render it fully operational again, Halbusi said, since "105 bridges have been destroyed. But [in the city of] Trebil life is back to normal — anyone can go there."

A contract given to the private security company Olive Group to rehabilitate and secure an international highway leading to the Jordanian border caused heated protests earlier this month over the group's alleged links with the infamous Blackwater security firm.

The Olive Group already has a presence in Iraq in the form of securing Najaf airport and the southern oil fields, but many pro-Iran PMU leaders are stridently against its presence in Anbar.

"Until now, the contract is still under government" debate, Halbusi said. "They have sent it to the Ministry of Construction and Housing. I advise them to go ahead [with it]."

The wording used in "the contract is not correct," he said, noting that it mentions "protecting or defending" the highway, whereas it would have been more appropriate to cite "investment, with security as a part of it." According to Halbusi investment is sorely needed in Anbar province.

He noted that there are a number of problems with the planned 2018 budget, including a stark difference between money expected to be allocated to the Sunni Endowment (Waqf) and to its Shiite counterpart, "about 300 billion Iraqi dinars [$240 million] for the Shiites and only about 3 billion [$2.4 million] for the Sunni."

"In the past, they gave Iraqi Shiites more because they thought the Sunni Waqf was richer — that they had more land. But not 300 billion compared with [basically] nothing," he lamented, when most of the mosques and religious property destroyed in the fight against IS were in Sunni areas.

In general, "we don’t have [an adequate] budget for Anbar, Ninevah and Salahuddin. I am the governor and I have only 40 million per year," he said, naming three Iraq provinces in which Sunni Arabs constitute the majority of inhabitants.

When asked whether he could cite other governorates’ budgets, he noted that many "other governorates did not have to deal with IS. They do not have destroyed bridges and buildings" from the fighting or the need to act quickly to ensure that anti-government sentiment is not rekindled.

On fighting corruption — the bane of his predecessor, Suhaib al-Rawi, who sacked all aides and advisers in August 2015 as part of Prime Minister Haider al-Abadi's first attempt to crack down on corruption but who was himself later accused and removed from the post in August 2017 — Halbusi said that he had set up teams to follow up on specific cases.

One of his successes, he said, was that the several hours it used to take for Anbar residents to get through the main checkpoint on the road between Fallujah and Baghdad, where bribe demands had allegedly been common, has been cut to only a few minutes with no noticeable fallout on security.

The continued presence of non-local PMU factions in the area — most of whom are from the Shiite-dominant south — could, however, become a serious problem, he noted. "Now we have ended the war. They said before, 'We have come to assist you.' Thank you. You assisted me. Now you must go back," he stressed. "I do not want more conflicts."

He added that the PMU factions were "there before I became governor. They were in Kilo 160, after Ramadi. They were between Amiriyah and Jurf al-Sakar" as well as in Fallujah "at checkpoints and to the north of al-Karma."

Halbusi said that in the eastern part of Anbar province they are limited in number and mostly on the road toward Baghdad, but that this was not the case in the western part of the province. He continued that he had told his point of contact with the PMU earlier in January to "send them a message. They must go home. We don’t like the fact that we are under their control."

If "Abu Mahdi al-Mohandes would like to come to Anbar, I will hold a meeting with him. I will tell him 'Thank you, now take your men,'" the governor said, in referrence to the PMU deputy chief and head of the Kata’ib Hezbollah faction.

The whereabouts of hundreds of men from Anbar reportedly taken by security forces including PMU factions during the fight against IS meanwhile remain unknown. Some reports put the number of those who "disappeared" from the Razaza checkpoint, which many Anbar internally displaced persons used to flee to Baghdad in 2015, at over 1,000.

"I spoke with Abadi about that," Halbusi reiterated, "and he said he had heard that. They speak about 700 but I think that it is less than 700."

But even if it were "five people, where are those five people?" he asked. "I spoke with [the PMU]. I spoke with other guys. But we need more pressure. I think they're not dead. I feel that maybe they are in Jurf al-Sakar, with Kataib Hezbollah."

On getting services to recently liberated areas, he stressed that "now I [am getting] assistance from the prime minister and this week we will send about 40 generators and school supplies" to the recently retaken western sections of the province.

Halbusi added, "I also got about $2 million from the Ministry of Migration and Displacement to rehabilitate health centers and clinics, but time is needed. If I take my documents and start to go around offices to get signatures, I need at least a month. We need about two months" total before plans are implemented.

"Come back then and you will see what I have done," he concluded.