An assassination attempt on a member of the Popular Mobilization Units and the massacre of his wife and children have raised questions about security in the Iraqi capital amid continuing US-Iran geopolitical tension in the region. 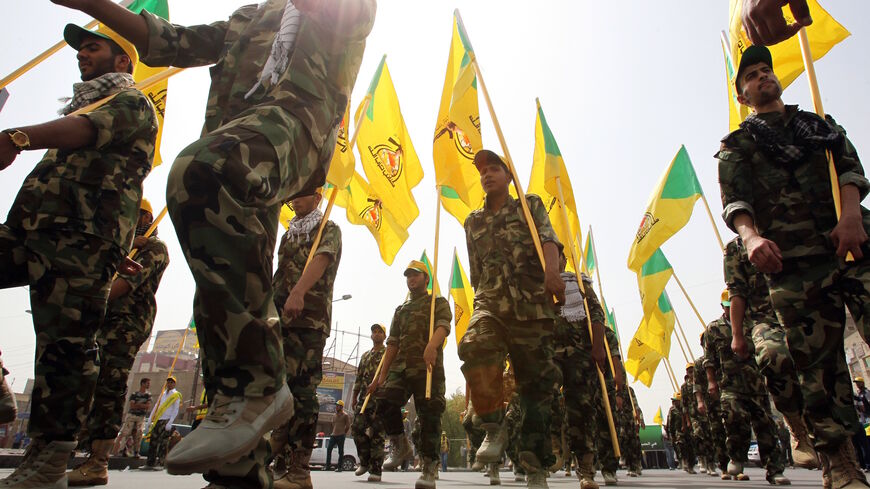 Shiite Muslim men in the military fatigues of Iraq's Kataib Hezbollah wave the party's yellow flags as they march through Baghdad during a parade marking Al-Quds (Jerusalem) International Day on July 25, 2014. - ALI AL-SAADI/AFP via Getty Images

BAGHDAD — An attempted assassination on Jan. 6 of a member of Iraq’s Popular Mobilization Units (PMU) and the killing of several members of his family in the Iraqi capital has sparked speculation about a wider conflict as well as growing concerns related to the country’s security sector.

The statement issued by the PMU said that the man critically injured on Thursday was named Ahmed Abd al-Muttalib and that five members of his family had been killed in a “treacherous and cowardly incident.”

It said that the killings had occurred at his home in Maalif, an area of western Baghdad southeast of the Baghdad International Airport.

“The gunmen opened fire on family members who were inside the house, killing five of them and seriously wounding” Muttalib, who was hospitalized, the statement continued.

Some Twitter accounts close to the PMU said that among those killed in the attack were his wife and three children aged 14, 8 and 7. Others reported that all had been shot in the head — including the PMU member now in critical condition — by four men whose identities are not known.

A security source told this journalist on Jan. 7 that another PMU official had been targeted in the Kirkuk area.

“At 0330 hours,” he wrote in a message, “an unidentified person entered the residence of Cpt. Alaa Yasser Ramadan Khader, born in 1984”, a security official for the 16th Brigade of the PMU, “and shot him while he was sleeping from the outside window of his residence with a pistol-type weapon,” hitting him in the head.

The 16th Brigade is a Badr affiliate consisting of mainly Shiite Turkmen operating in the Kirkuk and Tuz Khormato areas.

A Dec. 30 mass killing further south in the Babil province of 20 members of another family by members of the security forces, allegedly on the basis of false information, had sparked outrage only days before.

In that incident, the father of the family was initially accused of being part of a drug trafficking network and then of being affiliated with the Islamic State (IS), as Al-Monitor reported. It soon became clear that the attack was part of a personal dispute and that someone had exploited their personal influence within the security forces to authorize the raid.

Prime Minister Mustafa al-Kadhimi has since removed from their positions the regional and local heads of intelligence as well as the regional police chief. They and over a dozen others have been placed under investigation.

The 20 people killed were due to be buried on Friday morning after the forensic department handed over the bodies late Thursday.

The PMU member’s Jan. 6 attempted assassination may, however, be part of a wider conflict.

The 45th Brigade that he is a part of consists of fighters from Kataib Hezbollah (KH), which was listed by the United States as a Specially Designated Global Terrorist group in 2009 for attacking US forces and destabilizing Iraq.

It is closely linked to Iran’s Islamic Revolutionary Guard Corps (IRGC) and has been accused of being involved in targeted assassinations of activists involved in the 2019 mass protests that led to the resigning of the government at that time.

KH and Kataib Sayyid al-Shuhada (KSS), another IRGC-linked group with units within the government-incorporated PMU, were targeted by a US airstrike on Feb. 25, 2020, in the Albu Kamal area of Syria just across the border from the Iraqi town of Qaim in the first known offensive military action taken by the Joe Biden administration.

KSS spokesman Sheikh Kadhim al-Fertousi in recent weeks claimed to this journalist that “so far we already have 45,000” calls from would-be volunteers for the post-December fight against US forces should they remain in Iraq after Dec. 31.

Significantly, KH was also targeted by a US airstrike near the Iraqi-Syrian border on Dec. 29, 2019, in an incident that sparked a crescendo of tension and was followed days later by the high-profile assassination by US drone strike just outside the Baghdad airport of Iran’s IRGC commander Qasem Soleimani and former deputy PMU chief Abu Mahdi al-Muhandis, also a historic member of KH, on Jan. 3, 2020.

That was in turn followed by the Jan. 8, 2020, targeting by Iran of Iraq’s Ain al-Asad air base, which has long hosted forces from the international coalition against IS, by reportedly the largest ballistic missile attack ever against American forces.

The same base has repeatedly been targeted by ineffective drone attacks in recent days as part of a push to get all US forces out of the region being conducted by Iran-linked armed groups.

A statement by US Assistant to the Secretary of Defense Jonathan Hoffman released immediately after the Dec. 29, 2019, attack had said the United States had “conducted precision defense strikes against five KH facilities in Iraq and Syria that will degrade KH’s ability to conduct future attacks.”

Iraqi President Barham Salih had called it a violation of Iraqi sovereignty.

A KH regiment commander and aide to the 45th Brigade commander, Abu Ali al-Khazali, was one of dozens killed in the attack.

Anbar PMU Cmdr. Qassim Musleh had at that time told this journalist, in railing against the action, that at least 27 fighters from the two brigades had been killed and 37 injured and that “the two brigades targeted, the 45th and 46th, are part of Kataib Hezbollah” but “they are under my command and working as part of the Anbar Operations Command.”

Musleh was arrested in May on terrorism charges but later released, allegedly after pressure on the judiciary. He works closely with KH in the Iraqi-Syrian border area.

A Washington Institute profile published in April 2021 stated that, “In practice, KH PMF (PMU) Brigades frequently disobey the GoI (Government of Iraq) chain of command while remaining legally organs of the Iraqi state.”

Some PMU groups close to the IRGC are also suspected of involvement in a November 2021 assassination attempt on Kadhimi.

The town was retaken from IS in 2014, but the Sunni residents have not yet been allowed to return, allegedly because of Shiite militias including KH preventing them from doing so.

Also in the Babil province, a PMU commander was reportedly assassinated in August of this year. Gunmen opened fire on a vehicle carrying the man, known as Abu Sadiq al-Khashkhashi, killing both him and his guard, according to media reports.

Other PMU commanders have been killed by strikes conducted by foreign countries, such as the commander of the Sinjar Resistance Units (YBS), Marwan Bada. The YBS is linked to the Kurdistan Workers Party (PKK), which Turkey, the United States and the EU have all designated a terrorist organization, but is also part of the PMU.

He was reportedly killed by a Turkish drone strike on his car Dec. 7.

The PMU commander targeted on Jan. 7 remained in critical condition on Friday. For the moment, it is unclear whether it was his affiliation with an IRGC-linked unit, a personal dispute or other reasons that led to this latest of many targeted killings in Iraq.