Hints of a greater presence of an IRGC-linked Iraqi armed faction with government-salaried brigades in a Sunni tribal-dominant province has sparked outcry, as the group continues to raise money for operations in other countries. 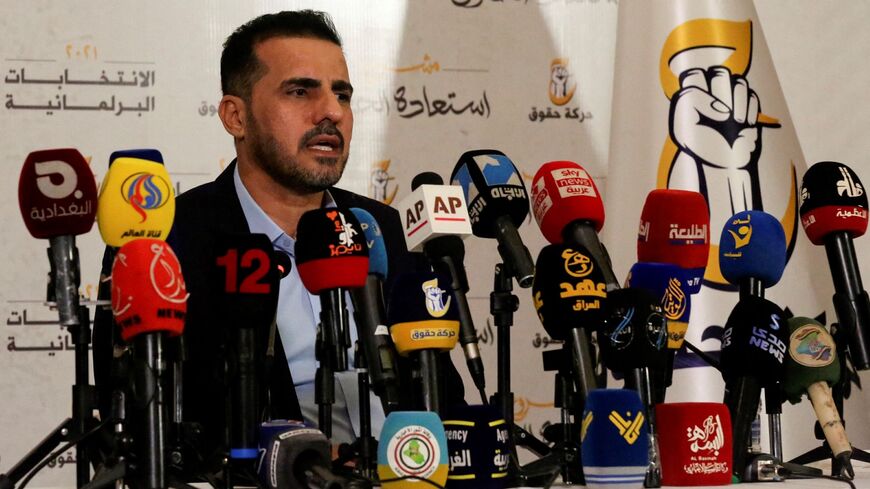 Hussein Munis, head of the Haq Movement, the civil wing of Kataib Hezbollah, gives a press conference to announce his party's electoral program in the Iraqi capital Baghdad, on Oct. 2, 2021. - SABAH ARAR/AFP via Getty Images

BAGHDAD – The Iraqi armed faction Kataib Hezbollah (KH) has in recent weeks stepped up messaging and attacks on its enemies both inside and outside Iraq.

A Feb. 3 drone attack on the UAE was claimed by the Iraq-based Alwiyat al-Waad al-Haq, which most experts believe is either a front group for KH or closely linked to them. KH has donated funds and urged other to do so for drones for Yemen’s Houthis, using “your money is unmanned aerial vehicles” as part of its marketing, with an image of an iconic UAE building in the background.

The movements of KH brigades in Iraq’s westernmost, mostly desert province of Anbar a few days later sparked outcry and fears among local inhabitants. Iraqi officials said the brigades were part of the government-salaried Popular Mobilization Units (PMU) officially deployed to the area, but local tribal leaders and others lashed out.

Photos and videos of a large convoy of military vehicles in Iraq’s Anbar province bordering Syria were posted on social media on Feb. 6.

Shortly afterwards, the government-linked Iraqi Media Security Cell tweeted that the convoy “belongs to the heroes of the PMU” and that they were simply returning to their deployment after time off duty.

Two KH brigades have long been officially deployed to the city of Qaim on Iraq’s border with Syria. They are generally disliked and feared by the local population.

Despite these brigades’ incorporation into the Iraqi official military forces, they and others linked to them have also at times been targeted in western Anbar and Syria by US airstrikes, including on Feb 25, 2021 in the first known offensive military action by the Biden administration.

He added in a tweet that "we have information about IS's intentions to enter the Karma district,” that "America is facilitating the movement of terrorists on the border.” and that “the military presence aims to prevent any security gaps and counter the movements of IS.”

Questions sent to Husseini by Al-Monitor had not been answered by the time of publication.

Karma (sometimes spelled Garma) is the hometown of Parliament Speaker Mohammed al-Halbusi, whose residence was targeted by a Jan. 25 rocket attack.

Eastern Anbar includes the cities of Ramadi and Fallujah and has experienced more reconstruction and investment in recent years than the western part of the province, where local inhabitants continue to claim land grabs by the non-local PMU including KH.

KH and other factions of what is commonly known as the muqawama, or resistance, led by Iran’s Islamic Revolutionary Guards Corps (IRGC), openly cross in and out of Syria and have fought alongside Syrian government forces against both local armed opposition groups and IS. In recent years IRGC-linked factions have been said to exert de facto control over some areas of eastern Syria, with little interference from Damascus.

Allegations of their involvement in the rising cross-border drug trade are frequent.

In any case, the local Anbar population's fears sparked simply by photos of a military convoy evince deep distrust of the non-local PMU. The region suffered greatly from IS, but is also where over 1,000 mostly men and boys are still missing, with many widely believed to have been killed for sectarian reasons.

Meanwhile, the political wrangling of the past four months since the country held parliamentary elections continues. The party affiliated with KH secured only a single seat in the Oct. 10 vote.

Internationally, another KH spokesman known as Abu Ali al-Askari tweeted congratulations in late January to Yemen’s Houthi movement for attacks on the UAE and Saudi Arabia, claiming them as victories for the resistance movement led by the IRGC.

The alleged front group for KH that conducted the Feb. 3 attack on the UAE recently threatened more attacks there.

Since being sworn into office in May 2020, Prime Minister Mustafa al-Kadhimi has often spoken out against “outlaw” groups and at times acted against them. Most observers concur that this term refers to KH and other muqawama groups that are not loyal to the Iraqi state, even if some have brigades within the official Iraqi forces.

In June 2020, over a dozen fighters from KH were arrested in Baghdad, only to later be released. In May 2021, a PMU commander for western Anbar seen as close to KH was also arrested but released some weeks later.

Kadhimi, who was targeted in a Nov. 7 drone attack at his Baghdad residence, is once again among the possible candidates for prime minister, while Halbusi continues to hold the role of parliament speaker. Both men have in the past been threatened by the group.

With little public support within the Iraqi population for KH, there are concerns that the group is likely to see few other means to retain freedom of movement and power than through continued threats and attacks.