Iran blames a deadly unidentified attack on a fuel convoy shortly after it entered Syria on the US, despite official denials. 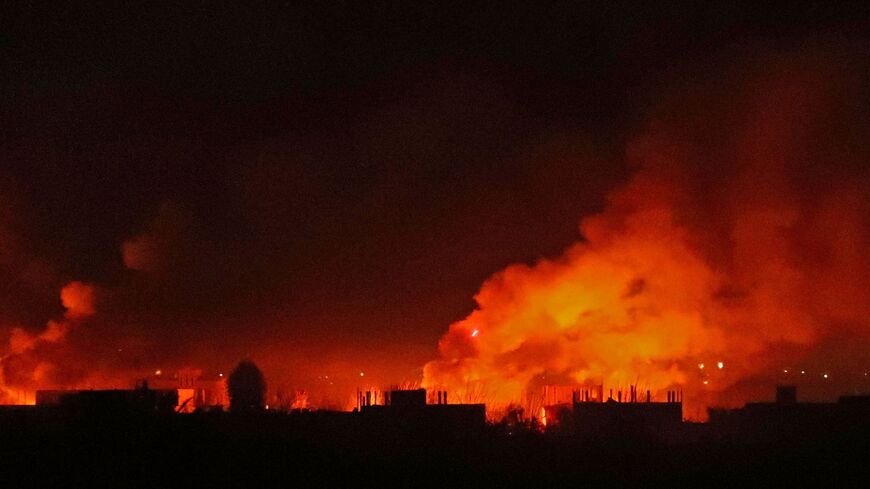 Tension is rising again between Iranian-linked armed factions and the US after airstrikes near the Syrian-Iraqi border targeted a fuel convoy shortly before midnight on Tuesday.

No one claimed responsibility for the airstrikes, which killed more than ten people. Iraqi officials claim that the vehicles were carrying a legal shipment of fuel from Iran to Lebanon. Some reports claim that munitions were believed to be hidden in some of the vehicles.

The attack reportedly occurred shortly after the first part of the convoy of over 20 vehicles entered Syrian territory from Iraq, near the city of Albu Kamal across from the Iraqi city of al-Qaim.

Iranian state TV claimed the attack was carried out by US drones and helicopters after eight of 22 tanker trucks had crossed into Syria. Multiple reports suggest that at least some of those killed were Iranian nationals.

Both the US and Israel have targeted these Iran-backed armed groups multiple times in recent years.

The US military has denied involvement in the latest attack, while the Israeli military has refused to comment. Israel in general does not acknowledge the strikes it carries out in Syrian territory, but is believed to have conducted hundreds in recent years against Iran’s smuggling of weapons and men to its Lebanese ally Hezbollah, as well as to IRGC proxy forces inside Syria.

Iraqi social media accounts associated with IRCG factions claimed that as many as 25 people were killed, blaming the “Zionist” US and saying that the attack had been carried out 25 meters inside Syrian territory, “less than 1 km away from the stations of Iraqi Kataib Hezbollah,” or KH.

KH is an Iran-linked Iraqi armed faction with three brigades inside the Iraqi government-salaried Popular Mobilization Units (PMU), two of which are deployed near al-Qaim. It existed for many years prior to the formation of the PMU and operates outside of Iraqi government control. Most analysts say it is linked to the IRGC. It is part of the Shiite muqawama, or Iran-linked resistance factions. It was designated a terrorist group by the United States in 2009.

A Feb. 25, 2021, airstrike by the US military on positions held by KH and Kataib Sayyid al-Shuhada (KSS) — also linked with the IRGC — in the Albu Kamal area of Syria just across the border from al-Qaim was the first known offensive military action taken by the Biden administration. The airstrike was retaliation for rocket attacks on bases hosting international forces.

KH and aligned groups have in recent years made it exceedingly difficult for reporters to access al-Qaim and the surrounding area. Sources within the city claim the Shia IRGC-backed factions do not want reporters to speak to the local Sunni Arab community or observe smuggling that allegedly occurs in the border area.

In a 2019 interview near this border with a commander of one of these IRGC-linked factions in al-Qaim, Al-Monitor was told that, in eastern Syria, the faction has "no contact with the Syrian regime’’ but that the fighters “are of course in contact with Iranian forces and our brothers in the Muqawama (resistance).”

Former KH leader Abu Mahdi al-Muhandis and IRGC commander Qassem Soleimani were killed by a US drone strike in Baghdad in early January 2020. Almost three years later, photos of the two men continue to adorn many streets in central and southern Iraq, including Baghdad, and many IRGC-linked forces have vowed to avenge their deaths.

When a US citizen who worked at a local English-language institute was assassinated in central Baghdad earlier this week, some social media accounts associated with the IRGC resistance factions rejoiced, and others claimed he was a spy. His killers have not yet been found.

The new Iraqi government — sworn in late last month after a year of political wrangling — is seen as being closer to Iran than the one it replaced.

Prime Minister Mohammed Shia al-Sudani took the position from now-former PM Mustafa al-Kadhimi, who IRGC-linked factions have accused of involvement or at least acquiescence in the US’s killing of Soleimani and Muhandis. Sudani has in recent days named himself acting director of the Iraqi National Intelligence Service.