US strikes on Kataib Hezbollah near the Syrian border have sparked debate over whether the attack infringed on Iraq's sovereignty. Al-Monitor spoke to the PMU commander for western Anbar, where dozens of fighters officially under his command were killed. 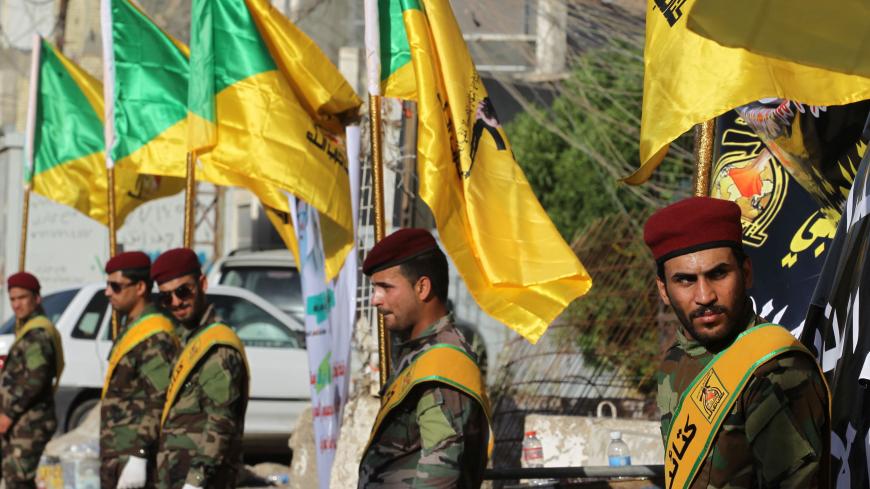 BAGHDAD — Retaliatory strikes near the Iraqi-Syrian border Dec. 29 on Iran-linked armed groups, after an attack on a base near Kirkuk that killed a US contractor two days prior, may mark a significant escalation between the major foreign powers vying for influence in the country.

The target, Kataib Hezbollah (KH), is considered a terrorist organization by the United States. Part of it has been incorporated into official Iraqi government forces within the Popular Mobilization Units (PMU).

A statement by US Assistant to the Secretary of Defense Jonathan Hoffman released immediately after the attack on the evening of Dec. 29 said the United States had “conducted precision defense strikes against five KH facilities in Iraq and Syria that will degrade KH’s ability to conduct future attacks” against Operation Inherent Resolve (OIR) forces, the name given by the United States to its military intervention against the Islamic State (IS) in Iraq and Syria.

A KH regiment commander and aide to the 45th brigade commander, Abu Ali al-Khazali, was one of dozens killed in the attack.

Anbar PMU Cmdr. Qassim Musleh told Al-Monitor at least 27 fighters from the two brigades had been killed and 37 injured. He noted in a message Dec. 30 that some were still buried under the rubble.

During an interview with Al-Monitor shortly after the attack, Musleh noted that “the two brigades targeted, the 45th and 46th, are part of Kataib Hezbollah,” but “they are under my command and working as part of the Anbar Operations Command.”

He firmly claimed the brigades hit had not “been involved in any action against the United States. They protect the borders. It is a lie to say these brigades crossed the border” into Syria.

KH and other Iran-linked, armed Iraqi groups have long been involved in the fight in Syria alongside Syrian government troops against local opposition forces. It was not immediately clear whether these specific fighters had ever crossed the border.

The Dec. 27 attack on Iraq's K-1 military base near Kirkuk, for which the United States' Dec. 29 statement explicitly blamed KH, involved over 30 rockets. It killed an American contractor and injured four US service members and two Iraqi security forces.

Commentators have noted IS remnants in the area probably do not have the sort of firepower, freedom of movement and equipment needed. Thus, the reasoning goes, pro-Iran PMU were likely responsible.

A flurry of condemnations from prominent Iraqis and armed groups followed the US strikes. Former Prime Minister Haider al-Abadi’s Victory Alliance, the fellow Iran-linked PMU Asaib Ahl al-Haq, the Islamic Dawa Party and individual members of parliament all issued statements railing against the US action, including demands for US forces to leave the country.

Iraqi President Barham Salih also called it a violation of Iraqi sovereignty. He had used the same words to comment on attacks earlier this year on pro-Iran armed groups' weapons depots and facilities, including others in the key Qaim area on Iraq’s western border with Syria.

Later during the night of Dec. 29, a military base housing US advisers in Taji just north of Baghdad was reportedly targeted by four rockets, with some speculating it was revenge for the PMU killings.

In the interview via WhatsApp Dec. 29, Musleh said the attack on KH headquarters near the border had been “expected.”

“We had heard a lot of discussion about the United States and Israel planning to attack” PMU forces, he said.

“They want to make our institutions weaker” after “their attempts at a coup failed,” he said, without clarifying what he meant by the term.

The PMU commander said the two countries had “sent people to push for the fall of the government” in the recent protests.

Protests mostly in the capital and Iraq’s southern Shiite provinces, in which at least around 500 people have reportedly been killed, have been underway since early October.

This reporter previously interviewed Musleh twice in Karbala, where he also holds the position of deputy chief of security for the shrines.

Musleh has repeatedly decried the government’s “weakness” over the years. He stressed again Dec. 29 this was the reason the “United States and Israel” were able to continue their “interference” in the country.

Qaim is of key strategic importance and is directly opposite the border from Syria’s Abu Kamal, where Iran-linked armed groups hold sway.

Locals have long claimed to Al-Monitor that Iran-linked armed groups active in western Anbar want to control lucrative cross-border smuggling routes. The groups themselves claim they are there to prevent a resurgence of IS in the area and have been tasked with helping to secure the border.

Western Anbar, with its vast deserts and valleys, has historically been used by insurgents to hide. It was retaken from IS in late 2017.

This Al-Monitor reporter was the only Western journalist to accompany Iraqi forces during the operations to retake Qaim and Rawa, the last two major Iraqi cities held by the international terrorist group in the region, according to the commanding officer at that time.

Visits to the region since then by foreign reporters have been sporadic, in part due to the difficulty of getting official permission to enter the area. On Dec. 29, however, some journalists had been taken on a military press tour to publicize an ongoing operation to clear the desert of IS remnants, Al-Monitor was told by a participant.

Regarding the Dec. 29 attack, Musleh claimed “this is not the first attack on the 45th and 46th brigades,” which were targeted because “they are strong and well-trained.”

KH is close to Iran’s Quds Force and is believed to have received military aid, funding and training from them.

The Dec. 29 attack near the border “was an attempt to make the PMU weaker,” Musleh said, adding, “but these attempts will only make them stronger.”