Due to rising US-Iran tension in Iraq, Denmark has said it will pull most of its elite military trainers out of the country. 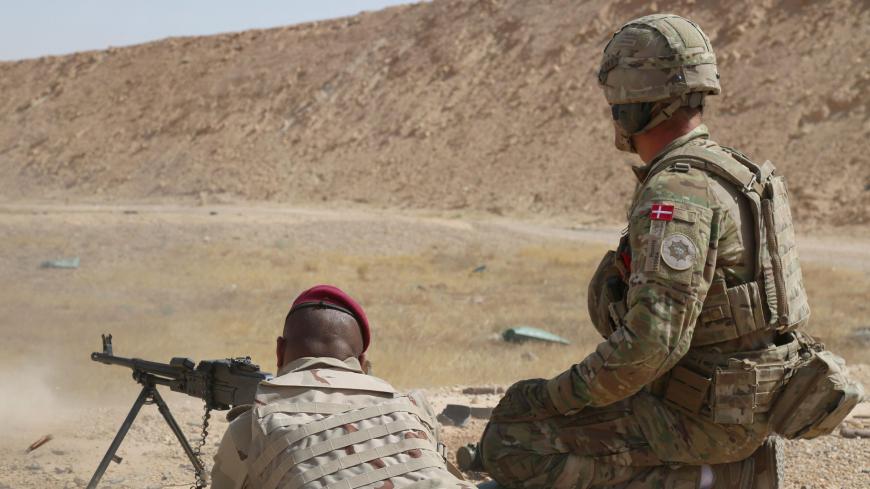 QAIM, Iraq — Danish forces played an essential role in training Iraqis from western Anbar in the run-up to liberating their land from the Islamic State. They then advised local fighters and commanders that have been key to intelligence gathering and combat.

Denmark also knew that the Iranian Jan. 8 attack on the Iraqi Ain al-Assad airbase would happen six full hours before it occurred, the national media reported.

Iran fired some 22 missiles at Ain al-Assad in western Anbar and a base near Erbil where US troops are also stationed, triumphantly claiming to have killed dozens. Although the western Anbar base incurred considerable damage, there were no casualties.

The United States was also notified that the attack was imminent. Its soldiers at the same base took shelter two and a half hours prior to the attack but were uncertain exactly where it would happen.

The evening prior to the Jan. 8 attack, Al-Monitor spoke to the head of a local Popular Mobilization Units (PMU) faction called the Aaly al-Furat Brigade (AFB or AAF), which received training by elite Danish forces in the lead-up to operations to liberate western Anbar from IS. Qaim was retaken from IS in November 2017.

The Danish unit also supported the PMU during the operation and afterward as part of stabilization efforts prior to leaving in late 2018.

Some 133 other Danish military members serving as trainers and advisers had been present at the base at the time of the attack to train Iraqi forces. After the attack, Denmark announced it would be pulling most out and transferring them to Kuwait. It said it would leave a few dozen in the country as part of its anti-IS efforts.

The interview with the commander, Col. Moussa al-Karbouly, took place in the Karabla area of Qaim, the heartland of his tribe. Al-Monitor was present in the town the following day when the news of the attack came in and as Iraq was debating whether to demand all foreign forces leave.

“In Anbar, we cannot ask the US forces to leave. Anbar is the largest province in Iraq. Most of Anbar is desert. We as Iraqis do not have sufficient means to control and protect it,” he told Al-Monitor, noting that the province had greatly benefited from US and coalition military technology, surveillance and airstrikes targeting insurgent hideouts in the province’s vast desert.

Karbouly’s father was killed by relatives who had joined al-Qaeda in Iraq. The commander had in years prior to the IS takeover captured several al-Qaeda operatives in his role within the security forces, including members of his tribe such as Omar al-Karbouly. The latter was later released and joined IS prior to being rearrested in the Iraqi-Syrian border area in early 2018 as part of a major operation.

The Ain al-Asad airbase in western Anbar next to the town of Baghdadi, which lies along the snaking bright blue Euphrates River, several hours along the only main road away from Qaim on the border with Syria.

Karbouly stressed, "Syria is next to us and what happened in Syria is the reason why IS happened in Iraq."

He said he had information on specific IS supporters originally from Qaim now in the western Iraq desert and across the border. One of the “most wanted” men he had spoken about in previous interviews with Al-Monitor, Tariq al-Karbouly, has since been killed after local intelligence gathering was conducted by members of his brigade.

“IS will be the only winner in the end” of the increased tensions between Iran and the United States and any pullout of US or all foreign military, he said.

Al-Monitor was told by a member of the AFB that for over a year the local forces trained and advised by coalition forces had been prohibited from having any direct contact with the coalition and that thus any information or tip-offs on the location of IS figures needed to be sent to the Iraqi army and then be sent to the coalition as part of a request for airstrikes.

This, they noted, takes too long.

A US attack on PMU brigades of the Iran-linked Kata’ib Hezbollah near Qaim killed at least 25 men and injured dozens of others on Dec. 29. This was followed by an attack on the US Embassy on Dec. 31 by supporters of the group and then on Jan. 3 by a US drone strike that killed Iranian commander Qasem Soleimani and Kata’ib Hezbollah leader Abu Mahdi al-Muhandis.

The AFB commander told Al-Monitor, “The PMU are part of government forces but in the eyes of the US government, they are outlaws. If the Iraqi government were strong, it could hold anyone accountable from among [the PMU] that does anything wrong."

However, the problems with the PMU and any specific factions that are more loyal to Iran than Iraq or that violate other Iraqi laws "cannot be solved by violence," he said. "It must be solved through political means but this is up to the Shiite" majority in the parliament.

Karbouly noted, “Two days prior to the attack on Kata’ib Hezbollah in Qaim, a car bomb exploded in the T1 area" near the city and “two soldiers and an intelligence officer from the Army’s 8th Division were killed."

There have been problems in the past between the Shiite-led PMU commander for the area, Qassim Musleh, and the Danish forces, who he claimed had fired rockets at the non-local Shiite-led PMU in 2018.

The commander of the highly secretive elite unit that trained AFB, Kaare Jakobsen from the Jaeger Corps, denied those accusations to this reporter in an exclusive interview at the Ain al-Asad base in October 2018, the day before the unit transferred out.

The Kata’ib Hezbollah brigades hit in Dec. 29 attack by the United States are at least nominally under Musleh’s command.

Denmark is scheduled to lead the NATO training mission in Iraq from the end of 2020 but it is unclear what will happen if all foreign forces are asked to leave.

An officer who asked for anonymity as he had not been authorized to speak to the media from the Army’s 8th Division, which is stationed near the city, told Al-Monitor that if coalition forces were to leave it "would be a huge problem" due to the key training they give, enabling the Iraqi forces to operate near the border and in the desert and mountainous areas.