An IRGC attack on Erbil has sparked outcry and raised concern in Iraq over armed groups that do not recognize the country’s national sovereignty. 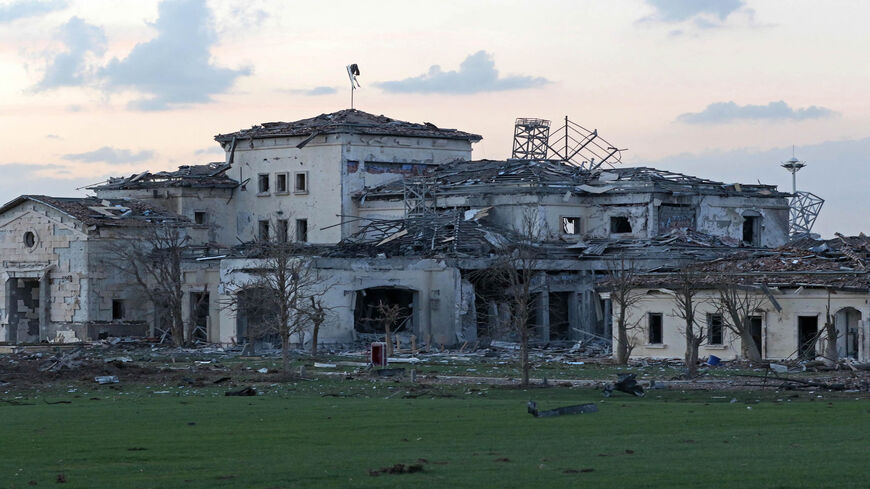 BAGHDAD — At least a dozen ballistic missiles shot at the Kurdistan Region of Iraq claimed by Iran’s Islamic Revolutionary Guard Corps (IRGC) in the early morning hours of March 13, left many questions in their wake.

KRG President Nechirvan Barzani and Kadhimi jointly described Iran’s attack on Erbil as a “serious development,” according to a statement by the president’s office afterward.

Some see the attack as retaliation and/or a warning amid regional alliances affected by the war in Ukraine, while others consider it an attempt to influence Iraqi politics.

The KRG said no one had died in the attack. IRGC-linked media instead cheered the alleged killing of “Mossad operatives,” in reference to Israel’s national intelligence agency.

The IRGC claimed to have hit a “strategic center” for Israeli spies in its neighboring country.

Video footage of the attack shows several massive explosions and photos taken of one site show considerable destruction to a residence on a farm north of Erbil, the KRI capital, owned by a Kurdish businessman. The offices of the media outlet Kurdistan24 also suffered damage.

The target of the attack initially appeared to have been the new US Consulate on the outskirts of Erbil, but statements later denied this despite reported damage to the massive compound under construction.

As this Al-Monitor correspondent noted in January, “Iran-linked groups have long called the sprawling US Embassy in Baghdad a ‘cove of spies’ and are likely to consider the enormous new consulate in the KRI the same.”

A meeting advocating for normalization of relations between Israel and Iraq held in Erbil in September and organized by a US think tank had led to outcry and calls for all participants to be arrested. One Anbar sheikh had called for their execution.

IRGC-linked groups operating in Iraq and consisting mainly of Iraqi nationals have been stepping up their attacks on the Kurdistan Region over the past year, hitting several targets in Erbil with a barrage of rockets in February 2021.

One media outlet widely considered to be close to the Kurdistan Workers Party (PKK) cited claims that during a March 12 meeting between Barzani and Turkish President Recep Tayyip Erdogan it was "agreed that the city of Erbil would become the center of the Israeli Mossad, and that the people of Iran and the people of southern Kurdistan would use it as Mossad agents against the Republic of Iran," thereby attempting to justify the Iranian attack.

Of serious and growing concern in the region are also the links between the PKK and the various armed groups connected to it — and IRGC-linked factions.

As Al-Monitor reported in January amid a string of attacks on KRG forces, “The Iran-linked 'muqawama' (resistance) factions are also unhappy about the close ties between the Kurdistan Regional Government (KRG) and Turkey, in part linked to these factions’ increasingly close relations with the Kurdistan Workers Party (PKK) in the Sinjar region in northwestern Iraq.”

On March 14, Barzani tweeted after Kadhimi’s visit to Erbil, “We will work closely with PM & partners to prevent further violation of Iraq’s sovereignty.”

Neither the “muqawama” factions nor the PKK acknowledge borders and conduct cross-border attacks and operations while accusing others of breaches of national sovereignty.

Both groups claim the right to spheres of action crossing several states. The PKK has tried to popularize maps showing massive areas of the Middle East they claim the Kurdish population has a right to, at times including as far north as Istanbul as well as the oil-rich city of Kirkuk in Iraq, and that thus they believe attacks are justified within. The muqawama instead sees their “jihadist” role in “resisting the Zionist/American occupation” in the Middle East as justification.

Regardless of whether the actual aim of the Iranian missile strike on Erbil was to affect the Iraqi political scene and government formation talks, it seems to have already done so.

A leader in the Sadrist movement reportedly said talks on government formation with the Coordination Framework were suspended following the attack.

Sadr’s office in Najaf issued a statement calling the attack “a dangerous precedent that threatens the security and sovereignty of the homeland.”

Multiple IRGC-linked parties, armed factions and individuals connected with them praised the attack, with some warning that more may be to come.

A senior Iranian official was cited by Middle East Eye as saying that “the strike was a response to a previous Israeli attack, launched from Iraqi Kurdistan, on a drone factory in the northwestern Iranian city of Tabriz a few weeks ago.”

Some social media accounts stated March 14 that the country’s media regulation department had banned an Iranian former diplomat and political analyst from appearing on news broadcasts after he had threatened that Iran “would attack three other positions in Erbil” of alleged Mossad cells.

Opposition to Israel has long been used by regional leaders to rally support, and a Baghdad protest against the country’s actions in May 2021 drew thousands and had been called by popular Iraqi Shiite cleric Muqtada al- Sadr, whose coalition got the most backing in the October elections.

Sadr has long been seen as striving for a more nationalist stance than the IRGC factions. He has long spoken out against Iraqi IRGC-linked armed groups crossing into Syria, mostly south of the Qaim border point in the western part of the Anbar region.

US officials believe that Iran “resourced and encouraged” an Oct. 20 attack on a military outpost housing US forces in the eastern Syrian desert across the border from Anbar.

A local source from Syria’s Deir al-Zor region told this journalist then that those present at the launch included both IRGC officials and Syrian government officers from the 4th Armored Division, which is believed to be close to Iran-supported armed groups.

Sunday’s attack has again raised concern that Iraq is sandwiched between potential launch sites for attacks originating outside its borders and veined with armed groups who care little for these lines between nations.