Attacks target US forces on both sides of Iraqi-Syrian border

IRGC-linked armed groups are presumed to be behind attacks on bases hosting US-led coalition forces this week in both Iraq and Syria that resulted in minor injuries but no deaths. 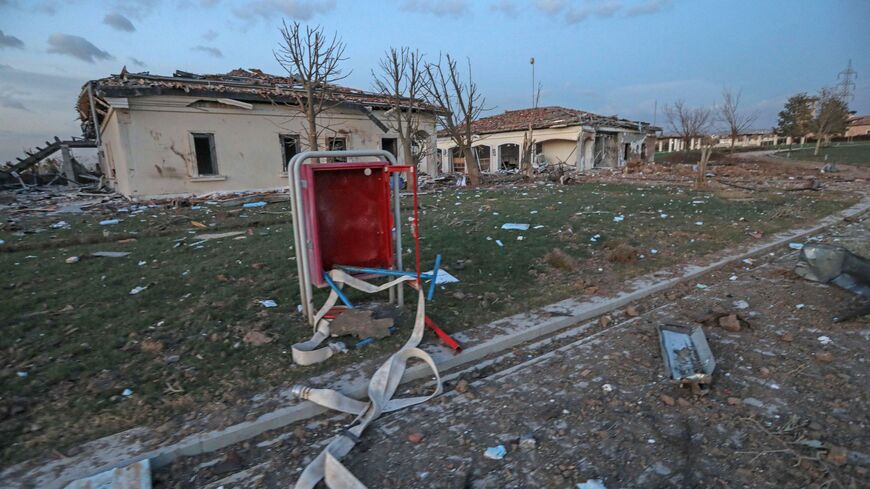 BAGHDAD – Factions linked to Iran's Islamic Revolutionary Guard Corps (IRGC) are widely thought to have been behind incidents involving missiles and armed drones 24 hours apart from each other at facilities hosting forces from the US-led international coalition on both sides of the Iraqi-Syrian border.

The attacks, which happened in the early morning hours of Thursday and Friday, have come as the US discusses delisting the IRGC as a terrorist organization, in response to reported demands by Iran as part of talks on its nuclear program.

There had been an uptick in attacks on facilities hosting US forces in early January, incidentally targeting the same bases and other locations.

Neither of the latest attacks resulted in any reported deaths. However, four US servicemen were “being evaluated for minor injuries and possible traumatic brain injuries” after the April 7 attack, according to a statement issued by the coalition.

A military official told Al-Monitor shortly after the attack on April 7, “Coalition forces at Green Village reported receiving two rounds of indirect fire. Two Coalition members were lightly injured in the attack; both were treated and returned to duty as of this morning. The incoming rounds ignited two fires which were quickly extinguished.”

On April 8, almost exactly 24 hours later, another attack was carried out on the other side of the border, in Iraq’s western Anbar province.

“At approximately 1:46 AM, April 8, U.S. air defense systems shot down an unmanned aerial system entering Al Asad Air Base” a coalition statement said, adding that no injuries had been reported.

One Iraqi source at the base at the time of the attack told Al-Monitor that there were two drones, but only one made it inside the perimeter of the base prior to being shot down.

The base, also known as the Ain al-Asad Base (AAAB), is located in the western part of Iraq’s Anbar province, which stretches to the Syrian border. It is not far from the main highway running from the regional capital Ramadi and the border city of Qaim, where IRGC-linked groups operate alongside regular Iraqi security forces.

AAAB is one of the few military facilities in the country where US forces are still hosted, alongside ones in Baghdad and Erbil. The IRGC claimed responsibility for a missile attack on Erbil in March, and both the coalition base in Erbil and AAAB in Anbar were targeted by a major Iranian ballistic missile attack in January 2020.

Anbar is the largest region in Iraq but sparsely populated and largely desert terrain except for the fertile Euphrates River Valley.

Both sides of the border are inhabited almost entirely by Sunni Arab tribal communities. On the Syrian side, north and east of the Euphrates River is the eastern part of the Deir al-Zor province under the control of the US-backed, Kurdish-led Syrian Democratic Forces (SDF).

South and west of the river on that side of the border, however, is controlled by the Syrian government forces and IRGC-linked militias allied to it, alongside a Russian military presence in some areas.

The dividing line is the river, which enters Iraq at Qaim, a border city where IRGC-linked groups known as the muqawama openly operate.

The Iraqi factions that are part of the muqawama — an Arabic word meaning “resistance” — also use a separate border crossing between Syria and Iraq just south of the city, where IRGC-linked Iraqi fighters have for years crossed back and forth to fight for the Syrian government forces.

Muqawama fighters originally from the Shia-dominant southern and central Iraq told Al-Monitor in previous years that they cross this border without government interference.

On neither side of the border do the local Sunni Arab communities feel they have decision-making abilities over their own territory.

There has been growing tension in recent weeks between IRGC-linked groups including Kataib Hezbollah and local tribes on the Iraqi side, with some Anbar tribal leaders issuing a statement against the groups and their alleged crimes in the region.

While the US transitioned to a non-combat mission in Iraq at the end of 2021, it continues to engage in combat activities in eastern Syria, where it works with both the Kurdish-led SDF and the Arab Maghawir al-Thawra (MaT) forces at the Tanf outpost.

The two local partner forces do not collaborate with each other. The Tanf garrison was attacked by drones on Oct. 20 in an incident that US officials said they believed Iran “resourced and encouraged.”

A local source said at that time that those present at the launch included both IRGC officials and Syrian government officers from the 4th Armored Division, which is believed to be close to Iran-supported armed groups and the Lebanese Hezbollah.

On April 7, the top US general, Chairman of the Joint Chiefs of Staff General Mark Milley, told the Senate Armed Services Committee that he believes the IRGC Quds Force is a terrorist organization "and I do not support them being delisted from the Foreign Terrorist Organizations list."