Attacks have increased against the Kurdistan Region of Iraq in recent months, targeting energy infrastructure while warning against continuing collaboration with Turkey. 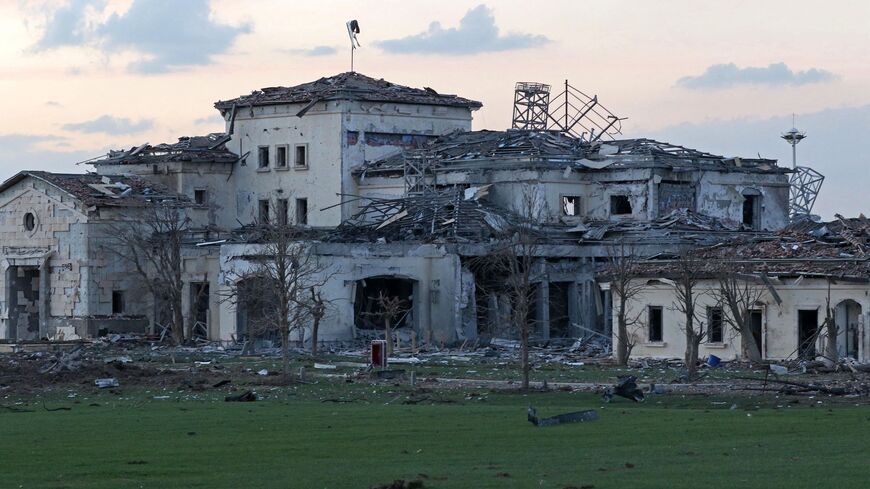 A general view shows a damaged mansion following an overnight attack in Erbil, the capital of the northern Iraqi Kurdish autonomous region, on March 13, 2022. Iran claimed responsibility for the missile strike. - SAFIN HAMED/AFP via Getty Images

ERBIL, Iraq — The latest in a lengthening string of attacks on the Kurdistan Region of Iraq (KRI) assumed to have been conducted by armed groups close to Iran has induced the region’s prime minister to warn on May 2 that this situation “cannot continue.”

Six missiles landed on Sunday night near a large refinery close to the regional capital of Erbil that had previously been targeted on April 6.

The May 1 attack sparked a fire in one of the main refinery tanks hit. The flames were put out some hours later. No casualties were reported in either of the two attacks.

The rockets were found to have been shot from Bartella in Al-Hamdaniya district, east of Mosul, in central government territory. Shiite-led Popular Mobilization Units (PMU) are currently deployed in the area.

On March 13, at least a dozen ballistic missiles had targeted Erbil in an attack claimed by Iran’s Islamic Revolutionary Guard Corps (IRGC). Some PMU brigades have historic ties with the IRGC but now officially answer to the central government.

The May 1 attack was followed by a telephone conversation between Kurdistan Regional Government (KRG) chief Masrour Barzani and the central government’s prime minister, Mustafa al-Kadhimi, who has long also tried to crack down on attacks by the same groups on Baghdad and other areas of the country and who vowed to punish the perpetrators.

An assassination attempt on Kadhimi in November 2021 was widely attributed to these groups.

Though some progress has been made, groups continue to conduct weekly if not daily attacks across the country — as well as some beyond the country’s borders — and are widely believed to be involved in lucrative protection rackets and informal border crossings. Multiple reports also cite involvement in cross-border drug-smuggling.

Amid a prolonged stalemate on government formation largely due to the political parties linked to Iran and to some of the armed groups suspected of involvement in the attacks on the KRI, Iraq still has neither a new president nor a new prime minister six months after the Oct. 10 vote.

IRGC-linked parties fared poorly in those elections and claimed that fraud had been involved.

Iran’s ambassadors to Iraq in recent years have all been either well-known former IRGC commanders — such as Iraj Masjedi, who was placed under US sanctions in 2020 and who was replaced in April — or had alleged ties with it, as is the case with the current Iranian ambassador to Iraq.

With his term now being ad interim and amid continuing threats, Kadhimi is seen as lacking the necessary power to take potentially unpopular measures against these well-connected, powerful groups.

Barzani tweeted after the May 2 phone conversation with the head of the central government that he had urged Kadhimi to “take practical steps to hold the outlaws accountable for last night’s rocket attacks on Erbil.”

Kadhimi and others have long referred to Shiite jihadist armed groups operating in Iraq as “outlaws” as opposed to “terrorists,” the word generally used for Sunni jihadist groups using similar methods.

Terrorism charges have during his term in office been brought against some men in these Shiite armed groups, but pressure and threats have almost always been followed by the subsequent dropping of these charges.

Barzani also tweeted, “Joint security control must be restored in the area used repeatedly to undermine the security of the Kurdistan Region and Iraq.”

Despite years of attempts to improve security in areas disputed between the central government and the KRG, problems remain in the disputed territories: from Sinjar to the northwest of the KRI to areas of the Diyala province to its southeast.

Islamic State (IS) cells continue to operate in these areas, as do Iran-linked, Shiite-led PMU.

Various PMU factions have long wanted control of these areas.

As this journalist reported in 2015 from Jalawla in Iraq’s Diyala province not far from the Iranian border, after the town had been retaken from IS a few months before, “An Asayish officer born in Jalawla estimated that the Shiite population in the city had been ‘around 2%’ before the conflict,” but that “Speculation is rife in regard to how much central government funding is going to the militias, since all KRG defense allotments must pass through the central government in Baghdad and the amount of weaponry the peshmerga have pales in comparison to that of the militias. What this implies in terms of the Iraqi government’s ultimate territorial intentions in an area the Kurds claim as their own is uppermost in the minds of many here.”

Though it had previously been under KRG control, Jalawla is now under central government control with a heavy presence of IRGC-linked armed groups in the area. Many in the Kurdistan Region — including its security forces, as this journalist has reported in recent years — are unhappy with this situation.

The Iraqi army forced KRG forces to leave oil-rich Kirkuk after an October 2017 referendum was held on independence of the KRI from the rest of Iraq — a move strongly opposed by the central government — and Shiite-led PMU were deployed to many of the areas disputed between the central government in Baghdad and the KRG.

Many of the PMU have historic links to the IRGC. The United States considers the IRGC a terrorist organization.

“On April 15, 2019, the US Department of State designated the IRGC, including the IRGC-Qods Force, as a Foreign Terrorist Organization,” a US government website notes.

The energy sector is key to the economy of the Kurdistan Region and has often been targeted by both IRGC-linked armed groups as well as the Kurdistan Workers Party (PKK).

IRCG-linked groups have grown closer to the PKK over the past year, with the former implicitly warning the KRG to halt any collaboration with Turkey and its military operations in Iraqi territory against the PKK.

Turkey, the United States and the EU consider the PKK a terrorist organization as well.

The KRG engages in a great deal of trade with both Turkey and Iran, on which it is dependent in some areas on water supply from rivers originating in it.

Dams now threaten this water supply amid more generalized drought in the region and worsening climate conditions, further complicating relations between the KRG and its neighbors and increasing risks to security.