High-ranking officials from the Kurdistan Region of Iraq have voiced concerns over the lack of effective collaboration from Baghdad and risks to security from the presence of the PKK. 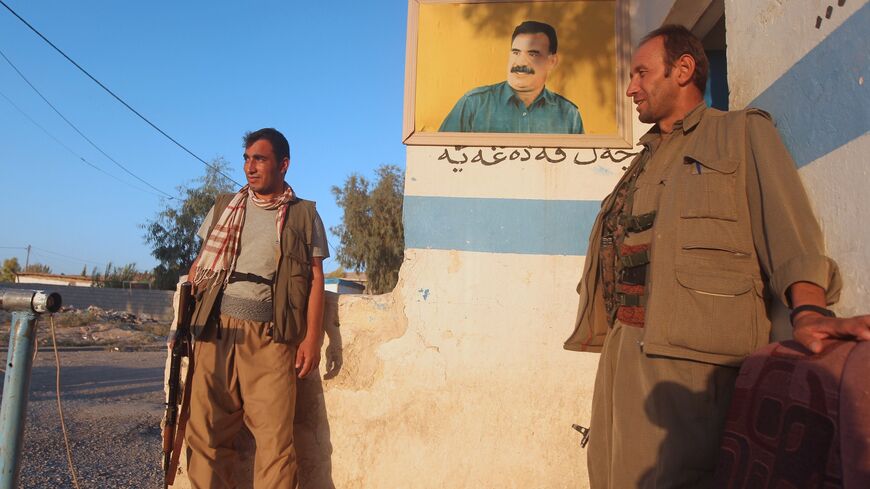 PKK fighters guard a post bearing an image of jailed PKK leader Abdullah Ocalan as they fight in an intensive security deployment against Islamic State militants in the town of Makhmur, southwest Erbil, the capital of the autonomous Kurdish region of northern Iraq, on Aug. 21, 2014. - AHMAD AL-RUBAYE/AFP via Getty Images

ERBIL, Iraq — As clashes between state and non-state armed groups continue in disputed territories of Iraq, high-ranking officials in the Kurdistan Region of Iraq (KRI) lament a continuing lack of attention in Baghdad to their concerns.

Multiple clashes have occurred in recent months in the Sinjar area currently under the Iraqi government between the Iraqi army and local groups allied with the Kurdistan Workers Party (PKK), heightening risks to stability in northern Iraq and the KRI.

Meanwhile, Iran’s Islamic Revolutionary Guard Corps (IRGC) has attacked Erbil and the surrounding area multiple times, including with a barrage of ballistic missiles on March 13.

Against this backdrop and continuing disagreements between Baghdad and Erbil over oil and gas and budgetary issues, the KRG invited six journalists including this Al-Monitor correspondent to meet with high-ranking officials on May 9 for a roundtable discussion at the Council of Ministers in Erbil, capital of the KRI.

KRG spokesman Jotiar Adil said during the discussion that the Iraqi federal government had over the years tried to prevent the KRG from selling oil and that recurring rumors of the KRG selling oil to Israel were false.

In justifying its March 13 attack on Erbil, the IRGC claimed that it had targeted “Mossad operatives,” in reference to Israel’s national intelligence agency, and that it had hit a “strategic center” for Israeli spies in the KRI.

The attack had hit the home of Sheikh Baz Karim Barzinji, CEO of the Iraqi Kurdish oil company KAR Group.

An investigation undertaken by a parliamentary committee in Baghdad found these allegations to be baseless, according to a copy of the report sent to Al-Monitor earlier this month.

The English version of the report stated: “If neighboring countries have information regarding the presence of armed groups or political parties engaged in regional conflicts or Israeli cells, then those countries have a duty to alert the Iraqi side and cooperate to resolve the problem.”

Adil noted that the KRG was in any case barred from selling to state entities, and that when it did sell its oil — including during the years of the fight against the Islamic State (IS) in which the federal government had “not sent a single penny” — “we had no choice but to sell it at lower than standard prices.”

KRG Prime Minister Masrour Barzani also stated on May 11 that the Iraqi Oil Ministry and the Iraqi State Organization for Marketing of Oil had been “threatening oil companies buying KRG oil, which has led to a decrease in the price of oil sold by the KRG.”

Oil and gas revenue is key to both the overall Iraqi economy and the KRI.

KRG spokesman Adil stressed in the May 9 roundtable that Erbil had seen remarkable development in recent years despite what he implied was a lack of cooperation from the central government in Baghdad.

He claimed that Baghdad had proved less able to use its proportionally much larger budget effectively, noting that the southern port city of Basra had not seen development comparable to that of Erbil in the years since the 2014 war against IS started despite having access to federal funds and not being under direct threat from the international terrorist group — unlike the KRI.

In 2014, IS had at one point threatened to take Erbil. Many peshmerga officers later went for lengthy periods of fighting on the frontlines during the war against IS — which the Iraqi central government declared victory against in December 2017 despite continuing sleeper cell attacks now mostly limited to disputed territories — without receiving their salaries due to budget issues.

Stability of the region is now key to its recovery, reconstruction and economic investment. A major obstacle, according to multiple security officials Al-Monitor has spoken to in recent years, is the presence of the PKK.

In response to a question from Al-Monitor at the May 9 roundtable, peshmerga Brig. Gen. Hazhar Zangana said that thousands of Syrians trained by the KRI’s security forces to fight IS were still in the KRI due to the PKK and their local affiliates’ refusal to allow them to return to their home country.

Most officials this correspondent has spoken to here in recent years stress that both the People’s Protection Units (YPG) in northeastern Syria and the Sinjar Resistance Units (YBS) are for all practical purposes local affiliates of the PKK.

The high-ranking officials at the May 9 roundtable noted that the main reason for the lasting presence of IS in some areas was security gaps — some measuring dozens of kilometers, they said — between KRI forces and those of the central government.

They noted that the Shiite-led, government-salaried Popular Mobilization Units — some of which were linked to the IRGC — in these areas were not accepted by local inhabitants and that this was a major problem in most of the disputed areas, including Sinjar.

The area of Sinjar, which was the site of the well-known 2014 massacre of the Yazidi minority group, is in territory disputed between the Iraqi federal government and the KRG. It is currently officially under the responsibility of forces answering to the central government.

The vast majority of those displaced from the areas, however, have fled to the KRI; many refuse to return until there are services and stability, which may be impossible to ensure so long as a plethora of armed groups continues to operate in the area.

An October 2020 agreement between the Iraqi central government and the KRG called for PKK fighters to be removed and a new security force of 2,500 members to be established in the area.

Attempts to implement this part of the agreement have thus far failed, and multiple clashes have occurred between the Iraqi army and YBS forces in the area in recent months.

Growing evidence points to increased collaboration between PKK-linked groups operating in northern Iraq and IRGC-linked armed factions, which also have a presence in the area.

This Al-Monitor correspondent reported in 2020 that “security officials have also repeatedly told this journalist that collaboration between the PKK and Iran-linked armed groups in the area (of northern Iraq) is of concern.”

An Inspector General report on the first quarter of 2022 issued this month corroborated this apparent collaboration.

The report noted: “Sinjar has historically been under the control of the KDP (the Kurdistan Democratic Party — the largest political party in the KRG), but since 2017, the KDP has dominated only the eastern half of Sinjar, while the PKK has established a presence in Sinjar’s west with the help of a Yazidi militia known as the Sinjar Resistance Units that maintains close ties to Iran-aligned militias.”