A security agreement reached earlier this month between the Iraqi central government and the Kurdistan Region on the disputed territory of Sinjar has sparked both praise and criticism as tensions rise between the KRG and the PKK. 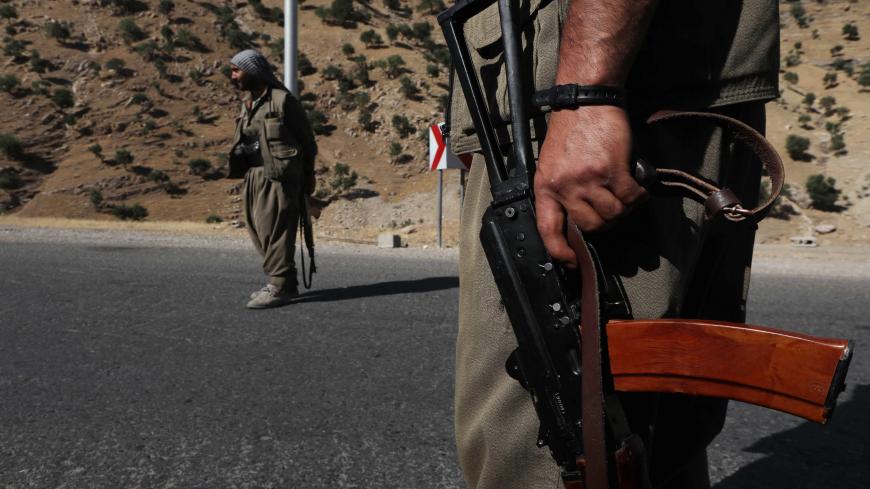 A member of the Kurdistan Workers Party (PKK) carries an automatic rifle on a road in the Qandil Mountains, the PKK headquarters in northern Iraq, June 22, 2018. - SAFIN HAMED/AFP via Getty Images

In the days following the Oct. 9 security agreement between the Baghdad and Erbil governments on the disputed territory of Sinjar, a Yazidi delegation traveled to the Iraqi capital to meet with Popular Mobilization Units (PMU) chief Abu Fadak al-Mohammadawi.

The delegation requested the PMU’s help to ensure that local armed groups close to the Kurdistan Workers Party (PKK) be allowed to continue operating. The Yazidi Sinjar Resistance Units (YBS) were trained by the PKK after the Islamic State (IS) occupied their area, and many consider them an affiliate of the group.

The PKK has long been designated an international terrorist organization by the United States, European Union and Turkey, and long-simmering tensions have been rising recently between it and the Kurdistan Region Government (KRG).

The agreement, backed by the United Nations Assistance Mission for Iraq (UNAMI), aims to put an end to disaccord over security arrangements and a lack of public services, in part by bringing in a unified administration. Many embassies and international organizations have praised it.

Observers and locals had long decried the confusing array of armed groups operating in the area and cited this as a major reason why many internally displaced persons had not returned, noting that it is a barrier to reconstruction. This had also negatively affected the ability of international aid organizations to provide assistance due to security concerns and time-consuming bureaucratic hurdles.

Sinjar came to international attention in mid-2014 after IS waged a brutal campaign in the city and surrounding area against the Yazidi religious group, kidnapping and killing thousands. Mass graves have yet to be exhumed and it is still unclear what happened to many women who were abducted with the intention of selling them as slaves to be raped and exploited by the transnational terrorist group.

It is part of the northwestern Ninevah province, the capital of which is Mosul, and is along the border with Syria. Inhabitants include Muslim Kurds and both Sunni and Shiite Arabs as well as the largest community of the Yazidi religious minority in the world.

The Oct. 9 agreement calls for a new mayor of Sinjar to be elected by a joint committee and the mayor of Mosul, PKK fighters to be removed and a new security force of 2,500 members to be established in the area.

A Kurdish security official who has been working in Sinjar since 2014 told Al-Monitor via WhatsApp Oct. 26 that the PKK is a major problem in the area. He asked not to be named due to security concerns. Another security official that this journalist met with in reporting from Sinjar in 2016 has since then reportedly been the target of assassination attempts allegedly by one of the various armed groups operating in the area and has been transferred elsewhere.

The official who is still working in Sinjar claimed the PKK continues to create problems in the area especially through “interference in the administrative affairs of the Sinjar district and its environs by appointing the directors of illegal districts with the PMU’s blessing and assistance,” “abduction of youths under the age of 18 of both sexes,” “digging tunnels in all areas of Mount Sinjar and preventing shepherds from reaching their areas,” “arresting anyone who is not in line with their ideology and detaining them in secret prisons of their own in the mountains” and “bringing officers from the Iranian Revolutionary Guard Corps to Mount Sinjar and identifying strategic locations on the mountain to make them into sites for the PKK to use.”

The claim that the PKK continues to abduct teenagers and adolescents to recruit them to fight has been voiced by many to this journalist both in Syria and in the Kurdistan Region of Iraq, including close to the Iranian border in September. Security officials have also repeatedly told this journalist that collaboration between the PKK and Iran-linked armed groups in the area is of concern.

Some say the burning Oct. 17 of the Baghdad offices of the KRG’s ruling Kurdistan Democratic Party was actually a reaction by Shiite-led armed groups connected with the PMU to the Sinjar agreement.

A statement by “Yazidi Elites, Leaders, and Institutions Regarding the ‘Sinjar Agreement’ between Baghdad and Erbil” welcomed the agreement, and the fact that the “two governments prioritized the situation in Sinjar in their negotiations” on territories disputed between the central government and the KRG.

It stressed, however, that “there are dangerous implications in the agreement that could lead to a disaster,” and set out points that should be addressed to avoid this, focusing on greater involvement of the Yazidis.

Though it did not specifically name fighters from the YBS, the statement urged that “all forces” active in the area be incorporated in the security mechanism, while stressing that all foreign fighters must be deported, in an apparent nod to the PKK.

Signatory Mirza Dinnayi is a Sinjar native and prominent activist who managed to get thousands of Yazidi women and children who had suffered at the hands of IS to Germany for medical and psychological treatment.

In speaking to Al-Monitor over WhatsApp Oct. 26, Dinnayi said that the Yazidi community was concerned that the agreement implies that new armed groups will be brought in so as to “ignore the YBS and all the other local forces in the region” and “this will make a new conflict."

He opined that the best option was to “disarm these groups in the region so that the youth, the young Yazidis from Sinjar who joined the YBS and other volunteer groups or the PMU” can be integrated into the local police, army or border police.

He stressed that “any and all foreign fighters” must leave the area and that even though the PKK had assisted the Yazidis in protecting civilians during the fight against IS, there is no reason for them to remain now.

It is also important, Dinnayi said, to “upgrade” Sinjar from a district to a governorate to protect minority groups and enable them to be better represented in parliament.

On the meeting between some the Yazidis and the PMU in Baghdad earlier this month, he noted, “We don’t need any kind of participation [in] or engagement with the forces that are against the presence of the US. We think that the US is a very good friend of ours: of Iraq first, generally, [and] of the minorities especially.”

“I think this small group of people who are actually in the PMU and who visited Abu Fadak and the others, I think they did not want to be part of the anti-US militia. They did that because they have concerns that there will be a new occupation of Yazidi areas and they don’t know what to do,” he concluded.