The Sinjar Resistance Units have been targeted by Turkish forces in Iraq for its connection with the Kurdistan Workers Party. 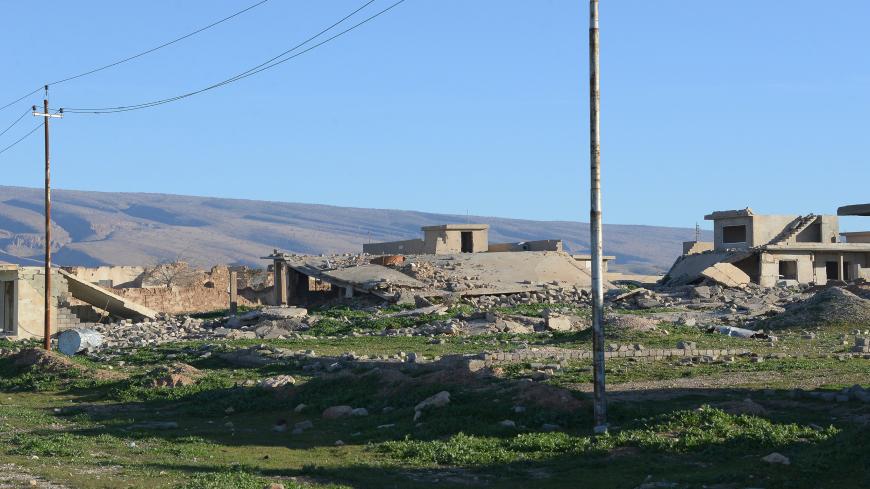 A general view of the damaged buildings in the northern town of Sinjar, Iraq, Feb. 5, 2019. - ZAID AL-OBEIDI/AFP via Getty Images

The Sinjar Resistance Units (YBS) is subject to Turkish shelling every so often, although it is an officially recognized force by the Iraqi government and registered as part of the Popular Mobilization Units (PMU) with the Ministry of Defense.

YBS members are Iraqi Yazidis from Sinjar who are often attacked because some consider them a local wing of the Kurdistan Workers Party (PKK), which Turkey classifies as a terrorist movement.

Meanwhile, there is an official Kurdish conviction that matches the Turkish opinion about the PKK still being present in Sinjar by means of the YBS. The Kurdistan Democratic Party (KDP) has officially objected to the fact that YBS members receive their salaries from the Iraqi government, and could thus contribute indirectly to financing the PKK.

The federal government's support for the YBS demonstrates the nature of the strategy pursued by the federal government to separate the Yazidis from their Kurdish identity, according to Ziryan Rojhiati, director of the Rudaw Research Center in Erbil.

However, the reality in Sinjar is more complicated; Al-Monitor surveyed the views of the residents and a number of YBS fighters.

One fighter told Al-Monitor on condition of anonymity, “We are not fighting against Turkey nor are we transgressing on its territory. We are only protecting the Yazidi camps and villages for fear of the Islamic State returning to our lands. Turkey is violating the country's sovereignty and killing Iraqi citizens under an unacceptable pretext.”

In the same context, YBS leaders denied Turkish claims about the YBS representing the PKK’s local wing, saying that it is an official force affiliated with the Iraqi government, and that it undertakes the tasks of maintaining internal security in coordination with the military and security forces in the area.

Turkish concerns about the presence of these young fighters on such important strategic lands, such as Sinjar, are understandable since the YSB knows the topographical nature of the area more than any armed unit from outside Sinjar, and may form a force that can move skillfully between the Qandil Mountains and Sinjar Mountains, which creates a corridor for fighters, weapons and logistical support against Turkey's interests.

In addition to these military concerns, political concerns have emerged about a possible YSB victory in the early elections that the government of Iraqi Prime Minister Mustafa al-Kadhimi decided to schedule for June 2021, especially after forming a political wing, the Yazidi Party for Freedom and Democracy. This party will run for the elections alongside three others: the Yazidi Democratic Party, which is close to the KDP, as well as the Yazidi Progress Party and the Yazidi Movement for Reform. If they win, they will tip the political balance of power in their favor.

Into the bargain, through the Autonomous Administration Council in Sinjar, an interesting experience in managing a disaster-stricken area was provided, and there are fears that this experience will become the nucleus of a more independent administration for the Yazidis in Sinjar.

Faris Harbo, a public relations official at the Autonomous Administration Council in Sinjar, told Al-Monitor that the council runs 14 municipalities that serve the residents of Sinjar, in addition to seven hospitals and other service institutions.

Harbo said that the council calls for transforming Sinjar into a decentralized governorate linked to the federal government, consistent with the Iraqi Constitution and Cabinet decisions that allow turning districts into governorates. If this goal is achieved, he noted, Sinjar will get its full share of the state budget according to the percentage of the population, which will accelerate the reconstruction process and serve its residents to the fullest extent.

Speaking to Al-Monitor, some Yazidi residents in Sinjar expressed fears that the Yazidi community needs to be rebuilt psychologically and socially, and that the YBS may be considered a catalyst for social disintegration, especially since those who join the YSB cannot leave it easily. Once Yazidi youths who have little experience join the YSB, they are taken to the Qandil Mountains for months or sometimes a year, where they study the PKK ideology. After that, it becomes difficult for them to return to their families, even if they are relocated to areas closer to their families north of the Sinjar Mountains or on the roads linking the Yazidi villages in southern or northern Sinjar.

Observers have downplayed these concerns, explaining that turning any armed unit into an open channel for every Yazidi youth rebelling against their family or community would be an exaggeration.

In regard to the deteriorating economic conditions in Sinjar, Mirza Dinnayi, director of the German-Iraqi Air Bridge, told Al-Monitor, “The rise of unemployment and the lack of development projects that accommodate a large number of youths push them to join the various armed factions, but as soon as the standard of living improves and civilian jobs are available, the youth will leave these factions.”

Barakat said that the PKK is of a secular, anti-religious nature, while religion is the basis of the Yazidi identity, which distinguishes Yazidis as a religious minority community among the surrounding Muslim majority — be it the Kurdish one in the Kurdistan Regional Government or the Arab one in southern Sinjar, Baa’j and Mosul.

This is why such claims about the PKK's influence may be exaggerated in a way that provides a Turkish excuse to intervene in Sinjar, and it may also hinder an attention-worthy Yazidi experience that may contribute to improving the reality of the Yazidi political representation and developing their economic, service and administrative conditions.