The Iraqi army is seeking to dislodge Yazidi fighters from Sinjar who Turkey says are members of the PKK. Thousands of Yazidi civilians are fleeing the area as clashes escalate. 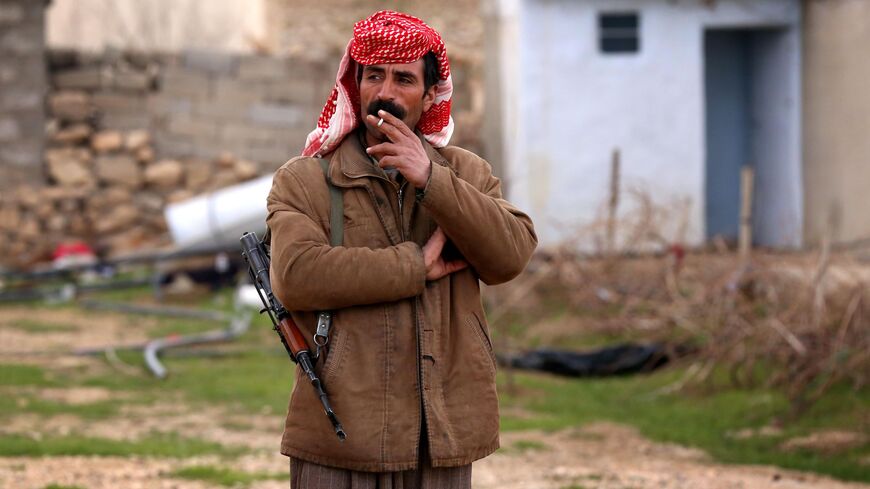 An armed Yazidi man smokes a cigarette on January 15, 2015 in the village of Sinoni in the northern Iraqi district of Sinjar, which Iraqi Kurdish Peshmerga fighters recaptured after it had fallen under IS group control. - SAFIN HAMED/AFP via Getty Images

A YBS spokesman said that it was “no coincidence” that the Iraqi army attacked its internal security forces known as the Asayish on April 19 after they refused to evacuate a checkpoint in northern Sinjar. The move came as Turkey launched its operation “Claw Lock” to isolate guerrillas of the Kurdistan Workers’ Party (PKK) in their strongholds in the mountainous Zap region northwest of Sinjar.

“It seems the Iraqi Prime Minister Mustafa al-Kadhimi is coordinating with Turkey,” Serhildan Shingali told Al-Monitor in a telephone interview. Turkish military drones continue to fly over Sinjar, he said, and “Turkey’s goal is to create chaos in this region,”

Why it matters: At least three Iraqi soldiers and an unknown number of YBS fighters have died in the clashes which intensified Sunday, triggering the largest exodus of Yazidi civilians from the area since the Islamic State unleashed its genocidal campaign against them in 2014. The United Nations has sounded the alarm. “Deeply concerned about clashes in Sinjar with grave consequences for civilians. … Domestic and external spoilers have no place in Sinjar,” the UN Assistance Mission in Iraq said in a tweet.

Murad Ismail, president of Sinjar Academy, an advocacy group, reckons that at least 1,000 Yazidi families have been displaced since the start of the hostilities. “The Yazidi community is in trauma. This reminds them of the genocide,” he said.

Mona Kizilhan, a health administrator who runs a clinic in Stuttgart where Yazidi genocide survivors receive psychological treatment, concurred. "The feelings of fear and helplessness are carrying them back to the early days [of 2014], reigniting trauma and spelling disaster for this community," Kizilhan told Al-Monitor.

Many are heading — again — for Dohuk in Iraq’s Kurdistan Region. Dohuk is already home to more than 200,000 Yazidis sheltering in overcrowded camps since 2014.

The Iraqi government says the offensive is to dismantle YBS control over Sinjar so as to enable families to return. Shingali said the fighting had eased since Monday and that talks were underway “to find a diplomatic solution, which is the only way out of this impasse.”

That remains a long shot as regional powers Turkey and Iran vie for dominance over Sinjar, together with their respective proxies and allies, leaving the Yazidi people stuck in the middle.

The background: Turkey says the YBS is part of the PKK and has escalated its own attacks against Sinjar, targeting senior YBS commanders with armed drones, while pressuring al-Kadhimi to take action against the group.

Turkey’s continued attack against Sinjar is one of the main reasons that the Yazidis have been unable to return. The Kurdistan Regional Government’s own claim on Sinjar is a further complicating factor. Relations between the Yazidis and the Kurdistan Democratic Party of Iraq (KDP), the dominant power in the Kurdish region and a close ally of Turkey, remain shaky. It is widely alleged that KDP Peshmerga fighters abandoned their positions in Sinjar in August 2014, leaving the unarmed Yazidis at the mercy of IS. The PKK rode to the rescue, shepherding thousands of Yazidis via Syria back to Mount Sinjar, the highest point in Iraq, with the help of US-led coalition forces.

Soon after, the PKK helped establish the YBS so as to enable the Yazidis to protect themselves against future attacks. Shingali, the YBS spokesman, said there were no PKK forces left in the region. “They all withdrew in 2018,” he said. He also denied reports that the YBS was acting in concert with Iran-backed militias against Turkey. “We have never attacked Turkey or Turkish forces. We are no threat to Turkey,” Shingali asserted.

Murad, the activist, said “There is no truth on either side. I am not saying there is no PKK in Sinjar, but the whole PKK thing is being inflated. Surely, Turkey is behind a lot of the urgency that has been created.”

The presence of Iran-backed militias in the region is the other big wrinkle. An Iraqi Kurdish official speaking not for attribution told Al-Monitor that Israel “is deeply concerned” by the presence of the Iran backed paramilitary units in Sinjar “because they are using the area to funnel weapons into Syria.”

Turkey says Sinjar serves the same purpose for PKK fighters moving men and materiel between their bases in Iraqi Kurdistan and Syria and has threatened to launch a ground offensive into Sinjar. Shingali confirmed reports that Iraqi authorities have been erecting a concrete wall running from Fish Khabur, where the Turkish, Syrian and Iraqi borders converge, to the southernmost tip of Sinjar. He said four kilometers of the wall had been completed so far.

In October 2020, the UN helped broker a security and stability agreement signed by Baghdad and KRG officials, which calls for the appointment of an independent mayor and the expulsion of all armed groups from Sinjar. They are to be replaced by some 2,500 local security forces, including the YBS.

However, the agreement remains on paper. The YBS-affiliated Sinjar Democratic Autonomous Council continues to prevail over Sinjar while a rival, pro-KDP government in exile sits in Dohuk.

The agreement has been sharply criticized for failing to take local communities’ views into account.

“Many rounds of discussions between the two sides didn’t yield a solution and it seems the military option was now rolled to the play. This is obviously the tail impact of the Sinjar Agreement which requires removal of PKK and affiliates from Sinjar,” Murad noted.

“We obviously do not defend PKK, but we defend the 3,000 Yazidis who are in the ranks of YBS. We believe they should be integrated along with other Yazidi and non-Yazidi groups to create local security structure by people of the region under [Iraqi Security Forces] structure fully within the law,” Murad added.

Know more: Read Jared Szuba’s story about the Pentagon’s report on alleged collusion between Iran-backed militants and the PKK