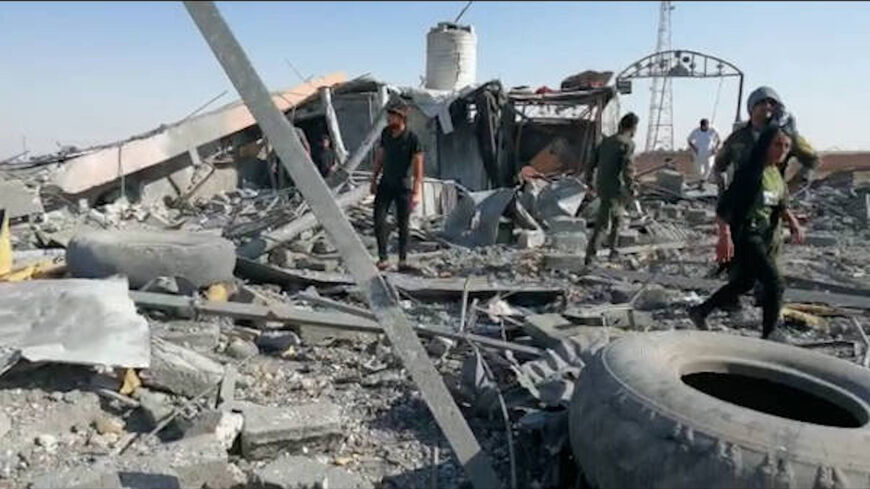 Rubble from alleged Turkish airstrikes on a makeshift hospital in the predominantly Yazidi Sinjar region of Iraq is seen on Aug. 18, 2021. - Firat News

At least five people were killed and numerous others wounded in Turkish airstrikes on a makeshift hospital in the predominantly Yazidi Sinjar region of Iraq on Tuesday, according to local and diplomatic sources on the ground. The attacks are part of Ankara’s broader military campaign against the Kurdistan Workers Party (PKK) across Iraqi Kurdistan that has displaced thousands of villagers and claimed dozens of civilian lives.

The clinic in the village of Skiniya at the southwestern foot of Sinjar Mountain was totally destroyed in the airstrikes, according to medical workers cited by Agence France-Presse. They initially placed the death toll at three. Several of the victims were reportedly civilians and the rest members of a Yazidi militia known as the Sinjar Resistance Units (YBS), which received training from the PKK and is on the Iraqi government’s payroll.

Sikiniye was among a string of Yazidi villages seized by the Islamic State when it rampaged across Iraq murdering thousands of Yazidi men and enslaving the women in what the United Nations has formally labeled a genocide.

Scenes of the airstrikes published by Firat News, a pro-PKK news agency, showed black plumes of smoke rising above a dusty plain and several collapsed buildings.

Roj TV, another pro-PKK news channel, broadcast images of a grieving Yazidi woman in Sikiniye, her arms raised in despair. She said villagers were not allowed to retrieve numerous people thought to be trapped under the rubble because of the threat of further Turkish attacks.

A Yazidi asylum seeker in Europe who declined to be identified by name said the clinic was once a school that had been established in the 1950s. “It’s close to a water source that is renowned for its healing properties and there are several houses nearby,” said the source, who belongs to the slain YBS commander Hesen’s Hababa tribe. “Civilians were treated at the clinic because there are no functioning hospitals within reach,” the source added.

The Turkish raids followed an attack the previous day on a vehicle carrying a senior YBS commander. Seid Hesen and his nephew, a YBS fighter, perished in the drone strike carried out by Turkish forces just as Iraqi Prime Minister Mustafa al-Kadhimi was visiting Kocho village in Sinjar to commemorate the mass slaughter of more than 800 Yazidis by IS. Three civilians were reported to have been wounded in that attack. The strike on the hospital is thought to have targeted fighters wounded in Tuesday’s attack who were receiving treatment there.

The statement “mirrors the long-established pattern of [Iraqi leaders’] disregard for Sinjar and its people. Though the Yazidis went through a genocide in 2014 and one of the survivors [Nadia Murad] received a Nobel Peace Prize, it has taken seven years to convince an Iraqi prime minister to visit Sinjar,” noted Matthew Travis Barber, a University of Chicago PhD candidate who worked for a number of years on the humanitarian and advocacy responses to the Yazidi genocide. “As the prime minister was arriving, Turkey assassinated a man who had been summoned by Iraqi military officials to join a meeting with him. The lack of response to this insult merely reinforces the posture of weakness that Turkey seeks to accentuate,” Barber told Al-Monitor.

“Turkey delivered a message to the Iraqi government that clearly says, ‘This is our military activity zone and we can act as we wish.’ These strikes were not only a violation of Iraqi sovereignty, but also disrespect to the prime minister,” concurred Murad Ismael, co-founder and president of Sinjar Academy, an advocacy group. “Iraq has the backing of all the five members of the UN Security Council and can easily confront Turkey, at least diplomatically. Iraq is not powerless but so far it has not acted,” Ismael told Al-Monitor.

The Yazidis’ anguish is compounded by the international community’s apparent indifference in the face of Turkish aggression, notably the United States'.

A State Department spokesperson speaking not for attribution said in emailed comments to Al-Monitor, “We are aware of the press reports concerning the Turkish operations in northern Iraq. We reaffirm our view that military action in Iraq should respect Iraqi sovereignty. We defer to the governments of Iraq and Turkey for further comment.”

Turkey has escalated attacks on Sinjar, which falls under the governorate of Nineveh, killing high-value PKK linked cadres with its increasingly sophisticated drones and sowing further fear and insecurity among the region’s traumatized Yazidi population. Ankara demands that the PKK withdraw from the region, saying it is a logistical hub for fighters and weapons flowing to northeast Syria, where a PKK-linked administration backed by the United States is in charge.

The area has since been dominated by a patchwork of allied and rival militias. They include the Iran-backed Popular Mobilization Units (PMU), the PKK and the YBS on the one hand, and the Kurdistan Democratic Party of Iraq (KDP), which enjoys close ties with Ankara, and its Yazidi affiliates on the other. “All of them are using the Yazidis for their own individual agendas,” the Yazidi asylum seeker said. “The Iraqi government doesn’t want the KDP to return to Sinjar so it plays blind to the PKK and subsidizes the YBS with monthly salaries paid out of the budgetary allocation for the PMUs. The KDP cooperates with Turkey because it wants to weaken the YBS, which it views as its main obstacle to regaining control of Sinjar. Iran has a common interest with the PKK because they both use Sinjar to access Syria,” the asylum seeker added.

The lack of economic opportunity in Sinjar, which remains devastated by the war against IS, leads many Yazidi men to turn to whichever militia offers the highest pay.

The PKK established a presence on and around Sinjar Mountain in August 2014, when it intervened to rescue thousands of Yazidis abandoned by Iraqi Kurdish Peshmerga fighters as IS forces butchered their way through the area that is known as Shingal in Kurdish.

Turkey’s President Recep Tayyip Erdogan has threatened to invade the area but the presence of Iraqi and Iranian-backed forces stand in the way.

A deal finalized in October 2020 between the Iraqi Kurds and the central Iraqi government in Baghdad was meant to defuse the situation and pave the way for the return of more than 200,000 Yazidis who continue to shelter in camps in Iraqi Kurdistan. The US-backed accord calls among other things for the withdrawal of all armed forces from the region and refers to the PKK by name.  A 2,500-strong local police force absorbing some YBS members is meant to provide security.

“Through all the years of this conflict, the Yazidi demand has been consistent: They want Sinjar to become a governorate with a local security and administrative framework similar to that enjoyed by every other governorate of Iraq. They do not want to be co-opted and occupied by any of the external political parties with guns — KDP, PKK or PMU. A key part of this process means a robust project on the part of Baghdad to develop a single, depoliticized security force for Sinjar that must absorb the members of all current militias,” Barber noted.

However, the deal has remained mostly on paper and critics say it was crafted without proper consultation with the Yazidis themselves. And with Turkey’s continued attacks, “the agreement is falling apart,” said Hanar Marouf, a Millenium Leadership fellow at the Atlantic Council, a think tank based in Washington. Marouf told Al-Monitor that the central government can take immediate “baby steps” to reverse its demise by establishing the police force for which provisions already exist in the Iraqi budget.

Barber insists that external pressure is required to unblock the current impasse. “The administrative dysfunction in Iraq's minority-inhabited territories is the product of internal competition between the central and regional governments — especially as the latter attempts to increase its influence through the annexation of minority areas. This dynamic will not fix itself and Iraq needs external support in producing a solution,” he argued. But the deafening silence in the face of Tuesday’s bloodletting suggests that no such help is forthcoming in the near future and that Turkish attacks will continue apace.