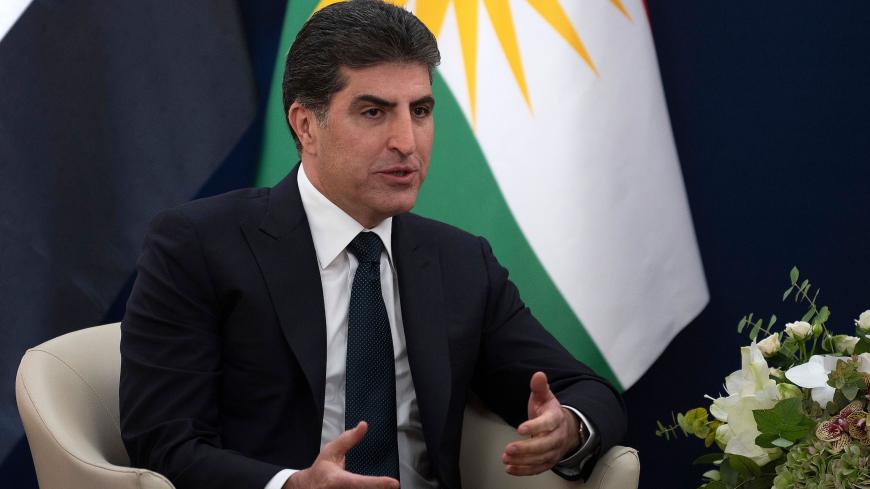 Kurdistan Region President Nechirvan Barzani speaks during a bilateral meeting with US President Donald Trump at the World Economic Forum in Davos, Switzerland, on Jan. 22, 2020. - JIM WATSON/AFP via Getty Images

Details of the unexpected Sept. 4 meeting in Ankara between Turkish President Recep Tayyip Erdogan and Iraqi Kurdistan Region President Nechirvan Barzani are beginning to emerge, with sources confirming that it was prompted by French President Emmanuel Macron’s visit earlier last week to Baghdad.

Turkey’s powerful spy chief Hakan Fidan was the only other person in the room during the approximately 80-minute-long conversation. Barzani spoke English. Fidan did the translating, the sources said.

As Macron throws his weight behind Greece and Cyprus, pressing for EU sanctions on Ankara in the escalating row over drilling rights in the eastern Mediterranean, Erdogan was keen to learn what Macron discussed with Iraqi leaders, well-placed sources briefing Al-Monitor said. Barzani also met with Macron in Baghdad.

The sources denied suggestions that Barzani would be assuming a mediating role between France and Turkey or would travel to Paris in the wake of his talks with Erdogan.

Barzani did, however, carry a conciliatory message from Iraqi Prime Minister Mustafa al-Kadhimi to Erdogan. “The dust has settled,” one of the sources said, without elaborating on the substance of the message.

Now, either Akar or Turkish Foreign Minister Mevlut Cavusoglu can be expected to visit Baghdad in the near future and Kadhimi to then come to Ankara on his first official visit since the former Iraqi intel chief became prime minister in May, the sources said.

On Sept. 5, the Turkish Defense Ministry announced it had ended anti-PKK operations in the Haftanin area of Iraqi Kurdistan that borders Turkey. But Turkish attacks are continuing elsewhere across Iraqi Kurdistan, with civilians squeezed in the middle.

An investigation launched in June by the Kurdistan Regional Government (KRG) parliament found that 504 villages had been emptied since 1992, mainly as a result of Turkish land incursions and airstrikes. Most of the displacement occurred in the Dahuk and Erbil provinces, according to Rudaw, which published the parliamentary commission’s findings the day after Barzani met with Erdogan.

Rudaw said that “in the space of one month, from June 5 to July 4, Turkish forces fired almost 669 shells and 70 rockets at border villages in Zakho.” Around 50 civilians have been killed since Turkey first began targeting the region in 1992, with the number of Turkish bases rising from four to 18.

Checkpoints set up by Turkish forces and village guards, which is a Kurdish paramilitary force paid by the Turkish state, have added to local fury against Turkey and the KRG alike. The checkpoints in the Haftanin area are now being dismantled.

PKK sources aired skepticism over the Turkish announcement, saying Turkish attacks were likely to continue in Haftanin. The pause was at best a temporary measure to ease domestic pressure on Barzani and to placate Baghdad, a PKK source speaking on condition of anonymity told Al-Monitor via WhatsApp from Iraqi Kurdistan. Hours after that interview, Turkish fighter jets and artillery struck several villages in Kani Masi in the Amedi region of Dahuk, local Mayor Sarbast Sabri said. "These bombings have been ongoing since yesterday. They have caused massive material damages to groves and orchards, burning a large number of trees," Sabri told Rudaw Sept. 8.

Murat Karayilan, commander of the People’s Defense Forces, the PKK’s military wing, is thought to be currently based in the Amedi region and responsible for the group’s activities in Syria as well.

The recent redeployment of Bahoz Erdal, the PKK’s senior-most Syrian Kurdish commander, to northeast Syria was raised during Friday’s talks between the Turkish and Iraqi Kurdish delegations, the sources said. Turkey has placed a bounty on Erdal’s head and claimed on numerous occasions to have killed him, only for Erdal to pop up on pro-PKK TV channels to prove the opposite.

Sinjar, the Yazidi majority area bordering Syria, also came up, the sources added. The PKK helped rescue thousands of Yazidis in Sinjar from the clutches of the Islamic State (IS) in August 2014, as the jihadis butchered thousands of others abandoned by Kurdistan Democratic Party-affiliated Peshmerga forces who were supposed to defend them, as many Yazidis see things. An unknown number of PKK militants has remained entrenched in Sinjar ever since.

Turkey claims that Sinjar serves as a land bridge for the militants connecting their headquarters in the Qandil Mountains near the Iranian border to northeast Syria, where PKK-linked Kurds are in power. Turkey wants the PKK removed from Sinjar at all costs. In June, it carried out a wave of airstrikes against the PKK-friendly Sinjar Resistance Units (YBS), sowing terror among the local population still traumatized by IS.

Baghdad pays YBS salaries, as they are considered to be part of the Popular Mobilization Units (PMU) created to fight IS. KRG officials insist the most effective way of weakening the PKK’s grip over Sinjar — and hence, to deflect Turkish attacks — would be for Baghdad to cut off the YBS’ salaries. Washington has pressured Baghdad to do so, and Baghdad has promised to comply. But it has failed to follow through. Though Kadhimi “understands the problem," he has “other, more pressing priorities,” one of the sources said.

A compromise formula was floated a year ago to create a local police force drawn from the YBS and those who fled the area when IS unleashed its genocidal campaign in 2014.

Murad Ismael, a prominent Yazidi activist and former director of Yazda, a global Yazidi organization, believes all armed groups in Sinjar should come under the authority of Iraq’s Defense and Interior ministries. He says several federal police brigades could be formed to enlist current members of these groups.

“The YBS, which consists of some 2,500 Yazidi locals, along with other armed groups in Sinjar, including Yazidi PMU, should all be assimilated into these brigades,” Ismael told Al-Monitor.

“These brigades, along with Yazidi peshmerga forces who are currently based near the Syrian border, as well as local Arabs of Sinjar, can be part of a comprehensive security mechanism to protect the entire west and north of Ninevah, as well as to defend Iraq’s border with Syria,” Ismael added. Sinjar, or Shingal as it's called in Kurdish, is part of Ninevah province. There are around 4,000 Yazidis serving under the peshmerga command, according to the KRG.

An estimated 219,000 Yazidis remain stuck in displacement camps in neighboring Dahuk province. A steady trickle has started to return to their homes in Sinjar despite adverse conditions all aggravated by the coronavirus pandemic. Ninevah Gov. Najm al-Jabouri said last week that “thousands of Yazidis” had returned to Sinjar, but he gave no precise figures.

“It’s so critical [that they do] but also so complicated,” observed Sherri Kraham Talabany, president of Kurdistan-based SEED Foundation, a local charity that is involved in combatting domestic violence and aiding displaced Yazidis.

“Competing factions and militias contribute to a lack of stability and security, bombing from neighboring Turkey, and the lack of livelihoods all make it extremely challenging and complicated, not to mention the basic housing and infrastructure is still not in place,” Talabany told Al-Monitor in emailed comments.

“One critical step the government of Iraq can do to support the well-being of the Yezidi population and aid their return home is addressing the issue of reparations for survivors of [IS]. Those who spent time in [IS] captivity, whether as a slave or a child soldier, have extensive medical, mental health and other humanitarian needs. Children need access to education urgently, and boys in particular need to make up for the years they spent in madrasas being brainwashed.”

On Sept. 6, an Iraqi official said the central government would provide a 10 million dinar grant — about $8,300 — to each Yazidi family that returned to Sinjar. And Macron pledged during a joint news conference with Kadhimi: “We will do our best to help you, especially in Shingal, to help the Yazidis.”

Some 2,880 men and women abducted by IS remain missing, according to the KRG’s Office for Rescuing Kidnapped Yazidis. Barzani flew back from Ankara to Erbil with two Yazidi children in tow who were handed over by Turkish authorities. The boy, age 11, and the girl, age 10, were abducted in Sinjar in 2014. The whereabouts of their parents and four other siblings remain unknown.