It's unclear whether reports of Kurdish militants' withdrawal from Sinjar in Iraq have convinced Turkey not to launch a military offensive. 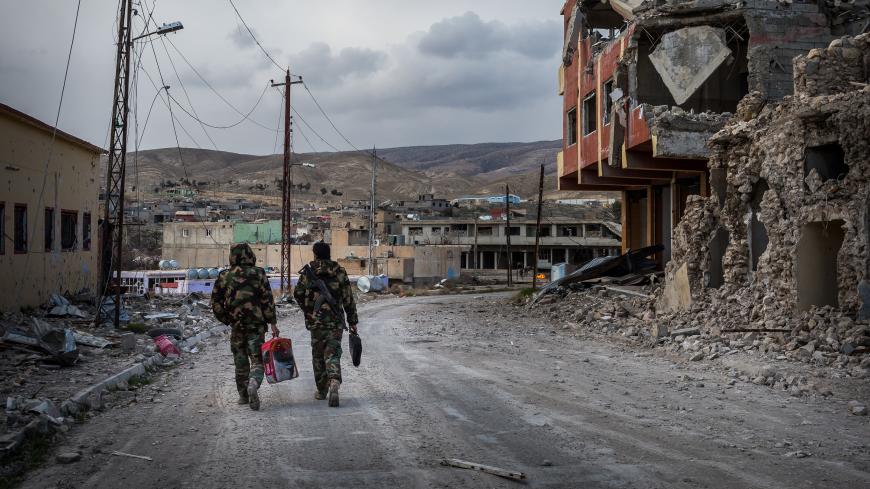 Kurdish militants reportedly have withdrawn from Iraq’s Yazidi region of Sinjar after several years, leading to speculation about the timing and reasons behind the decision. Experts are questioning whether the move will be enough to stop Turkey from intervening in the region militarily, despite a warning from Baghdad.

Iraq said today it had deployed troops over the weekend and now controls the area. Baghdad has warned Turkey that it won't accept a Turkish military operation within Iraq's borders.

Yet Turkish President Recep Tayyip Erdogan said March 26 he was ready to begin an offensive in the Sinjar mountain area bordering Syria if Iraq doesn't thoroughly rid the region of the Kurdistan Workers Party (PKK), which Turkey considers a terrorist organization. The PKK's presence there has been a point of contention between Iraq and Turkey since the militant group took control of the region from the Islamic State (IS) in 2015. Erdogan has listed Sinjar as one of Turkey’s “next targets” following Ankara's offensive on the northern Syrian city of Afrin.

Erdogan had made a statement to Iraq as he spoke March 21 at a ceremony in Ankara: "If you can’t solve that [PKK] problem, one night we can arrive in Sinjar suddenly without telling anyone."

Soon after that ominous warning, the Kurdistan Communities Union (KCK) — the so-called executive council of the PKK — announced that the group was ready to withdraw from the region. The KCK said conditions have changed since 2014, and the Yazidis (a Kurdish religious minority in the area) are now able to protect themselves and their lands with their own security forces.

Local sources told Al-Monitor that Kurdish militants then began handing their posts over to the Yazidis' Sinjar Resistance Units (YBS) and the Sinjar police. However, given the strong ties between the PKK and YBS forces, the PKK’s assistance is likely to remain in place.

There is speculation that the PKK devised the withdrawal tactic to deny Turkey a pretext for launching a military operation in the region. There are also reports that the Washington and Tehran administrations, which don’t want Turkey to expand its influence in Iraq, have pushed the Kurdish militants to withdraw for that reason. Yazidi sources also cite Washington as influencing the exits of both the PKK and its close ally, the People’s Protection Units (YPG).

“I think the Americans are behind the PKK’s decision to withdraw,” a Yazidi representative told Al-Monitor on condition of anonymity, noting that an American delegation recently visited Sinjar and met with YBS representatives in the region.

Yazidi people who believe Turkey has helped IS support the PKK’s decision to withdraw to avoid further clashes in their land. However, according to the Yazidi representative, the move might not be enough to change Turkey’s mind. Indeed, Ankara is highly likely to consider this move a deception resembling the YPG’s handing over Manbij’s control to the Manbij military council.

Apart from speculation, actual facts on the ground are also worth mentioning. Since last year, Turkey has been seeking an opportunity for a strategic deployment that will sever the connections between Iraqi Kurdistan and northern Syrian territories under the control of Kurdish groups.

Therefore, while Turkey's army has been stepping up its military operations against PKK bases scattered over Qandil and surrounding regions, it has also established a series of bases, outposts and checkpoints in the area. According to pro-government media, the Turkish army is working on transforming a 15-kilometer (9-mile) stretch of land into a “safe zone” in the Hakurk-Kani Rash area near Qandil.

In the past, similar Turkish ground operations launched in the region didn’t succeed. This time, however, Ankara’s tactic is not “to sweep and leave,” but instead “to sweep and stay.”

The territory is hard to control, with hundreds of villages scattered around the area. Thus a “buffer zone” could restrict the PKK’s movements, yet it should not be seen as a major blow to the organization.

In the meantime, the buffer zone can be a prelude to a possible military operation — Operation Tigris Shield — as Erdogan said in 2016, citing a possible operation against Kurdish militants' presence in Sinjar.

According to Turkey’s pro-government media, the Tigris plan was postponed because of the Afrin operation but is now back on the table. The proposed operation sees besieging the area, beginning with Dahuk and Zakho in Iraq's Dahuk province north of Mosul. Troops would secure the Ovakoy border near Zakho with the goal of entering the Sinjar region in Ninevah province. The Turkish army would take control of Fish Khabur/Semelka and Rabia/Yarubiya border crossings on the Iraq-Syria border. This plan theoretically provides for sweeping away the PKK while delivering a blow against the United States, which has reportedly been assisting the YPG via the Kurdistan Regional Government in Erbil. In this operation, the mostly Sunni Ninevah Guard (previously known as Hashd al-Watani) forces led by the former governor of Ninevah province, Atheel al-Nujaifi, might accompany the Turkish troops; those forces have been trained at Turkey’s Bashiqa base for a possible operation, press reports said. Bashiqa is to the northeast of Mosul, the capital of Ninevah province, while Sinjar is to the west of the city.

The plan calls for dismantling not only the Yazidi forces but also removing the Shiite Popular Mobilization Units (PMU) based at some key points in the Sinjar area and also at the Rabia border crossing. The PMU is an Iraqi militia, but is supported by Iran.

Is the Turkish government determined to implement its plan, or would the reported PKK withdrawal satisfy Ankara? It's not easy to forecast, as there are several factors to be considered:

Yazidi forces of the YBS are benefiting from Baghdad's financial support, indicating Baghdad considers them legitimate defense forces. The Iraqi government hasn't given up its demand for Turkey to evacuate the Bashiqa military base and has repeatedly said it is against Turkey’s military operations in Iraq. Yet the Turkish establishment thinks Iran’s influence over Baghdad might be helpful in changing these anti-Turkey policies.

Not be to be ignored are the Sinjar Yazidis' sentiments.

“Our people are not yet free from the traumas of 2014," when IS took over the area, the Yazidi representative said. "We have no enmity against Turkey. We just don’t want to face another likelihood of massacres. Our only goal is to ensure our security.”

Meanwhile, according to a March 23 Kurdish media report, the PMU has confirmed the PKK’s pending withdrawal.

“The [PKK] has officially announced it will leave [Sinjar]," Hudeda Coke, a PMU commander in Sinjar, told Kurdish news agency Rudaw. "We don’t want the Yazidis to suffer because of Kurds. We are grateful to them."