Iraq's Sinjar heats up again as PMU closes in

The world's attention has turned back to Iraq's Sinjar as Iranian-backed Popular Mobilization Units approach during operation to liberate Mosul and Yazidi loyalties worry Turkey. 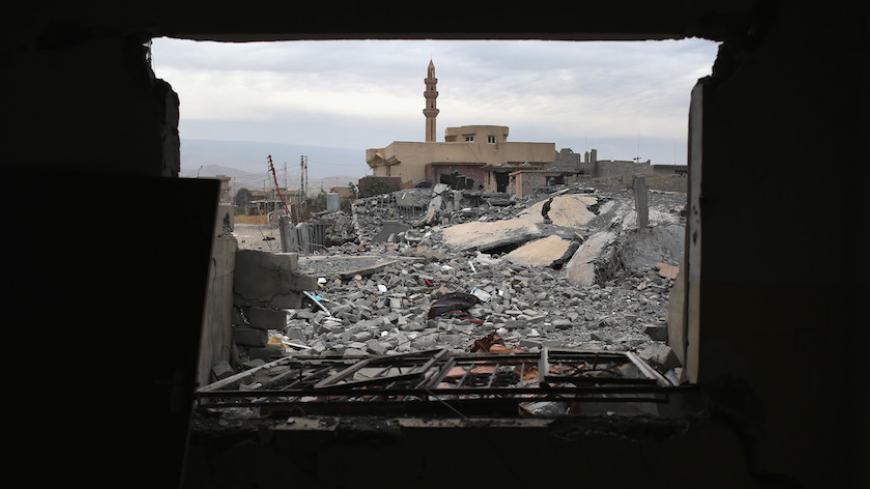 A Kurdish peshmerga soldier searches for weapons in the rubble of an airstrike near a mosque, Sinjar, Iraq, Nov. 16, 2015. - GETTY/John Moore

Attention has once again focused on Sinjar, the strategically significant and Yazidi-dominated area in northwestern Iraq that has long been a tinderbox of ethnic, sectarian and regional rivalries. The United States has been quietly and thus far unsuccessfully working to calm it.

The Iranian-backed Popular Mobilization Units (PMU) are closing in on the area as they clear the Iraqi-Syrian border of Islamic State fighters, part of the ongoing operation to liberate Mosul.

The developments have prompted worries of a Turkish intervention amid claims that the Shiite militias are working in concert with Yazidi groups affiliated with the outlawed Kurdistan Workers Party (PKK), which is carrying out a separate battle inside Turkey for Kurdish self-rule. There is even overwrought chatter about an Iranian-Turkish dust-up, all of which would disrupt the US-led campaign to defeat IS in Iraq and Syria.

Nawaf Ashur, a Yazidi journalist and fellow at the National Endowment for Democracy, told Al-Monitor that after driving IS out of the villages of Kassab and Tal Binad, the PMU liberated the village of Kocho with the help of the newly formed Yazidi Kocho battalion. “They are moving very rapidly,” he said.

Ashur added that there were unconfirmed reports that Kheder Salih, the leader of the PKK-linked Sinjar Resistance Units (YBS), was helping the PMU’s recruit Yazidi fighters and they were allegedly moving south to link up with them.

Although YBS spokesman Khalaf Murad denied that his group was involved in the battles south of Sinjar, “It’s a potentially explosive situation,” Ashur said.

Denise Natali, an expert on Kurdish affairs at the Institute for National Strategic Studies and contributor to Al-Monitor, agrees. She told Al-Monitor, “I would not be surprised at all if Turkey intervened militarily … Ankara has been stating this for months, particularly if PKK elements are enabled and remain in northern Iraq and Syria.”

Turkey has long demanded that the PKK withdraw from its foothold in the western part of Mount Sinjar and has threatened military action if it fails to obey. On April 25, Turkey matched its words with action when Turkish jets bombed YBS targets in Sinjar but mistakenly killed five peshmergas from its top Kurdish ally, the Kurdistan Democratic Party (KDP), instead.

The PKK presence in Sinjar dates back to August 2014, when the group rescued thousands of Yazidis under attack by IS. Their precise numbers are unknown, but roughly 400 PKK fighters are thought to be entrenched in Sinjar along with the YBS and female fighters from YJA Star, a Kurdish all-female militia that is also linked to the PKK.

Even partial control of Sinjar offers the PKK strategic depth inside Turkey’s Kurdish-dominated borders with Iraq. It also assures direct access to northeastern Syria, where the PKK’s sister organization, the People’s Protection Units (YPG), controls a large swath of territory along Turkey’s border with Syria.

Turkish President Recep Tayyip Erdogan sees the Shiite militias as a threat as well. He has gone as far as to label them “terrorists” even though they are formally operating under the umbrella of the Iraqi army. Allegations of cooperation between the PKK and the PMU have intensified amid frenzied speculation over a so-called Iranian corridor stretching from Tehran to the Mediterranean.

According to various media reports, the corridor would be established by the PMU, the PKK and the YBS on the Iraqi side and by the YPG, the Syrian regime and its own Iranian-backed Shiite militia allies on the Syrian side. The PMU’s recent moves toward the Syrian border have been linked to such plans. According to Natali, “Concern about an Iranian corridor to Syria reflects the larger post-IS dilemma: the competition by a multitude of sub-state actors for authority and control of liberated territories and resources.”

It was in large part to fend off such land grabs that in December 2015 Turkey deployed hundreds of its special forces to a camp in Bashiqa near Mosul, where Turkish forces were training Sunni Arab fighters loyal to former Ninevah province Gov. Atheel Nujaifi to participate in the battle to liberate Mosul.

The move sent Turkish-Iraqi relations into a tailspin but Turkey refuses to budge and, according to Iraqi Kurdish officials who spoke to Al-Monitor on condition of strict anonymity, sent in more special forces in the guise of aid workers but were forced to withdraw them under US pressure.

In this complex turf war, Turkey appears to enjoy the support of Massoud Barzani, the president of the Iraqi Kurdistan Region who is also leader of the KDP. Turkish troops provide a counterweight to the PKK and the PMU, who in Barzani’s mind are working together to subvert his plans for independence. “The KDP wants the PKK out of Sinjar perhaps as much as Turkey,” Natali noted.

But any expanded Turkish military presence could also torpedo the Iraqi Kurds’ hopes for independence, noted Arzu Yilmaz, who runs the international relations department at the American University of Kurdistan in Dahuk. “I totally disagree with the notion that Barzani would welcome a Turkish invasion of Sinjar,” she said in a telephone interview with Al-Monitor.

Yilmaz also believes the risk of a Turkish-Iranian confrontation in Iraq either directly or via proxies is overblown. “Turkey has reached the limits of its expansion and influence in Iraq. To the contrary, Turkey will seek to work with Iran as it always has to limit Kurdish influence, because setting aside the occasional tactical alliances they strike with various Kurdish groups, both countries ultimately see Kurdish nationalism as an existential threat.”

The United States has meanwhile weighed in using its influence over Iraqi Prime Minister Haider al-Abadi to get him to withdraw financial support for the YBS. At the same time, it helped persuade Haydar Shesho, the leader of an independent Yazidi militia, to work with the Kurdistan Regional Government (KRG). But Washington has failed to deliver on pledges of financial and other support to Shesho and some of his fighters are now reportedly defecting to the YBS and the Shiite militias. In a further setback, Baghdad is said to have put the YBS back on its payroll.

In March, fatal clashes erupted when KDP peshmergas and their Syrian Kurdish allies known as the Roj Pesh sought to muscle their way into the YBS-held town of Hanesor, which connects Sinjar to Syria.

A tenuous cease-fire was swiftly declared amid public anger over renewed Kurdish infighting but not before the KDP managed to grab some territory from the YBS.

According to Ashur, the Yazidis are feeling increasingly squeezed and a growing number are joining the PMU for protection. “They believe that if the Iraqi flag is raised in their territories, this will fend off Turkish and other aggressors,” he said.

Christine van den Toorn is the director of the Institute for Regional and International Studies at the American University of Iraq, Sulaimaniyah. In an interview with Al-Monitor, she concurred that the “only solution” for the Yazidis to get rid of the PKK and hence eliminate the threat of further Turkish military action is “if they switch the PKK out for the PMU, the Iraqi security forces and Baghdad.”

Correction: May 25, 2017 This article has been updated to include a denial from YBS spokesman Khalaf Murad that his group was involved in the battles south of Sinjar.