The Iraqi government has yet to comment after a 12-year-old was killed in the latest Turkish strike on northern Iraq's Sinjar region. 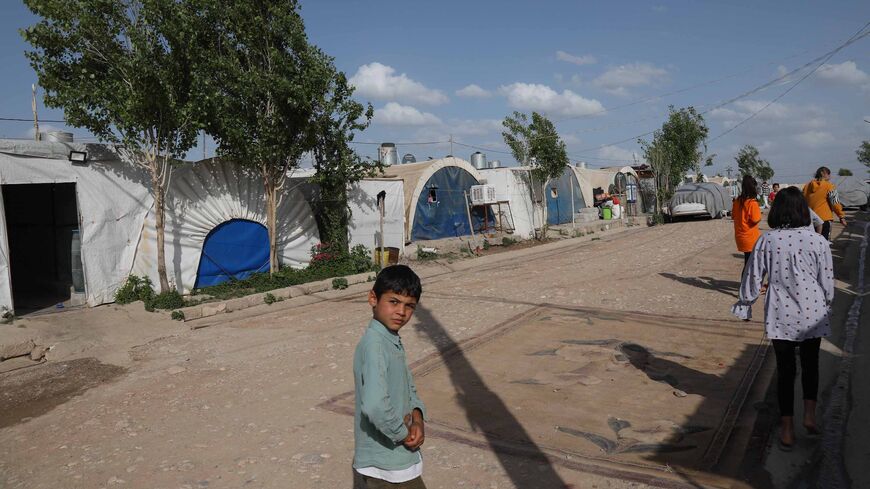 Displaced Yazidis stand by their tents at the Chamishko camp for internally displaced persons in the city of Zakho in the north of Iraq's autonomous Kurdish region on May 5, 2022. - SAFIN HAMED/AFP via Getty Images

The government of Iraq has yet to comment on a Turkish drone strike that killed a 12-year-old boy in the town of Sinune yesterday, the latest in a string of attacks in the Sinjar region of northern Iraq, adding to fury among Yazidis, a marginalized community that was subjected to genocide by the Islamic State.

Nobel laureate Nadia Murad, a Yazidi genocide survivor who was enslaved by IS, called Turkey’s attack “an act of terrorism.”

“Iraq has the ultimate responsibility to stop Turkey from attacking Sinjar,” said Murad Ismael, a prominent Yazidi activist. “The international community also has a moral responsibility towards Yazidis and the people of Sinjar. It is both painful and illogical that these attacks go [unaddressed] as if they are legitimate. It seems Turkey can get away with anything,” Ismael told Al-Monitor.

The UN condemned the attack without mentioning Turkey by name. “UNICEF is shocked at the killing of a 12-year-boy in an attack in Sinjar area,” the international body’s arm that deals with children said in a statement yesterday. “UNICEF calls on all parties to fulfill their obligation, under international law, to protect children at all times and without delay,” it added.

The Turkish drone targeted a local council associated with the Shingal Resistance Units (YBS), an all-Yazidi militia that was established with the help of an armed Turkish Kurdish group, the Kurdistan Workers Party (PKK), to help defend their people in the wake of IS’ genocidal sweep through Sinjar in August 2014. Ankara insists the YBS is therefore an integral part of the PKK, which is waging an armed campaign for Kurdish autonomy against the Turkish state.

Using this argument as justification, Turkey has been steadily escalating attacks on YBS targets in Sinjar, picking off senior leaders in drone strikes and also attacking the group’s facilities. The civilian death toll is climbing steadily. Yesterday’s bomb crashed into a bookstore, killing the 12-year-old boy. His grandfather and brothers were wounded in the attack. “This innocent child had his future stolen from him,” Murad said in a tweet with a photograph of the victim.

Today, Sinjar once again fell prey to Turkish airstrikes, which took the life of a 12 year old boy and critically wounded several others, including the boy's brothers. In an act of terrorism, this innocent child had his future stolen from him while sitting in his father's shop. pic.twitter.com/XfVBwUFDMc

At least four YBS fighters were also wounded in the strike.

“Yazidis largely disagree about the PKK presence and we do not want to involve ourselves in Turkish-PKK conflicts,” Ismael said. “We believe that all those who bore weapons to respond to the genocide, including the YBS, should be integrated to the Iraqi security forces and detached from foreign influences."

The PKK has enjoyed popular support in Sinjar ever since it helped shepherd thousands of Yazidis to the safety of Mount Sinjar via Syria with the support of US-led coalition forces after they were abandoned by Iraqi Kurdish peshmerga who fled the area before IS arrived.

“Turkish attacks on Sinjar are a form of political violence against a people struggling to recover from the genocide. This violence is directed at the Yazidis because a segment of their population has aligned with the larger constellation of entities affiliated with the PKK,” said Matthew Barber, a University of Chicago PhD candidate who worked for a number of years on the humanitarian and advocacy responses to the Yazidi genocide.

Barber told Al-Monitor that Turkey’s “campaign of terror is slowly working.” Sinjar residents protesting Turkey’s actions yesterday also called for the YBS to leave the area. “As people are abused by a NATO member, ignored by the international community and slowly beaten down by the violence, they give in to the demands of the abuser,” Barber noted.

Bordering Syria and home to a maze of armed factions and the area's tallest mountain, Turkey insists that Sinjar is a strategic land bridge for PKK and Iran-backed militants moving fighters and supplies across the border. Turkey’s continued attacks puts it in direct conflict with Iranian interests, which may explain why former Iraqi Prime Minister Nouri al-Maliki, who has close links to Tehran, was among the first Iraqi leaders to speak up against Ankara.

“The continuation of Turkish incursions on Iraqi land in the Kurdistan Region and the death and injury of a number of people will result in major harm to the relations between Iraq and Turkey,” he said in a statement.

Maliki earlier accused Ankara of having territorial designs on Iraq in response to Turkey’s latest offensive against the PKK in the Kurdish-controlled areas of northern Iraq. Launched in April, “Operation Claw Lock” is aimed at driving PKK forces away from their stronghold along the Turkish border and like previous campaigns has resulted in an unspecified number of civilian deaths and the displacement of thousands of others caught in the crossfire. Turkey is now gearing up for a fresh offensive against the US-backed Syrian Kurdish People’s Protection Units in northern Syria despite warnings from the United States that this would cause a humanitarian crisis and provide succor for IS.

Turkish assaults on Sinjar are among the main reasons some 70% of the region’s population displaced by IS violence and living in squalid camps near the Turkish border are unable to return to their homes.

“The Sinjar situation highlights how the interests of Iran and Turkey in Iraq both converge and conflict,” the International Crisis Group noted in a recent report. “Turkey has long-term goals that require Iranian acquiescence, such as a direct border crossing with federal Iraq and a rail connection to Mosul (an old plan that has made no progress), which would need to traverse the territory that connects Iran to its partner organizations based in Iraq and Syria,” it said. PKK and Iran-backed Popular Mobilization Units (PMU) interests have converged and conflicted in parallel.

An October 2020 agreement brokered by the UN between Baghdad and the Kurdistan Regional Government (KRG) — both of which lay claim to Sinjar — was supposed to stabilize the security situation in the region by bringing it under their joint control. The agreement also calls for the disbanding of the YBS and the expulsion of other militias, including the PMU from Sinjar, while incorporating some of their forces into the Iraqi army.

The deal has been sharply criticized for not taking the local population’s views into account and has yet to be implemented in any meaningful way.

The YBS and Iran-backed militias remain in control setting up their own administration and appointing mayors who are not formally recognized by Baghdad. In May clashes erupted between the YBS and Iraqi government forces in northern Sinjar, highlighting the fragility of the situation. The YBS accused Iraqi Prime Minister Mustafa al-Kadhimi of colluding with Ankara, while the PKK accuses the Kurdistan Democratic Party of Iraq, which is the dominant force in the KRG, of doing the same.

The KRG, Ankara’s top regional ally, did not formally comment on the drone strike.

“There’s no justification for partisan militias like the YBS or the PMU to control different parts of Iraq’s sovereign territory indefinitely,” Barber acknowledged. A transition process could be undertaken whereby seasoned fighters from the various militias could be recruited into an official force that is administered by the Iraqi state. “This cannot happen while a neighboring state bombs the area and while the United States and other international players express no interest in involvement, no interest in pursuing an initiative that would support Baghdad in facilitating the talks needed to effect this transition,” Barber added.

Editor's Note: This piece has been updated since its initial publication - an earlier version incorrectly stated that Sinjar is home to Iraq’s tallest mountain.