New Pentagon IG report says that the Turkey-PKK conflict and Iranian militias are contributing to instability in Iraq. 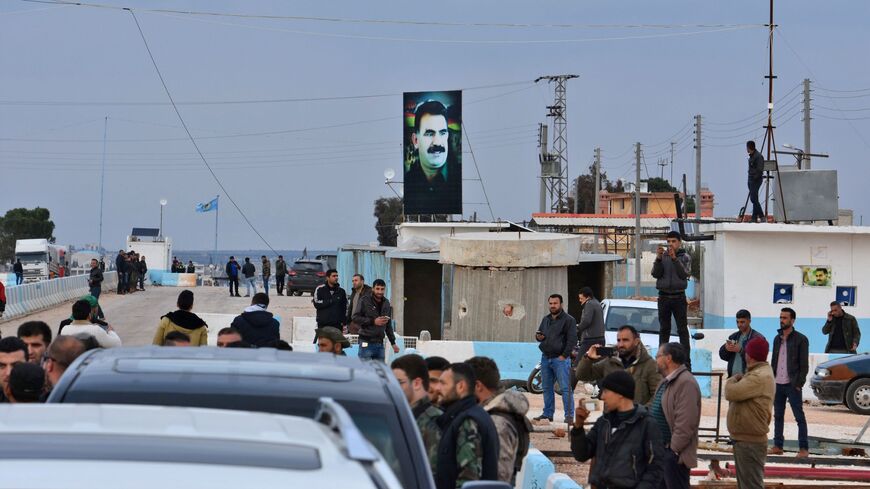 A picture taken on Feb. 20, 2018, shows a convoy of pro-Syrian government fighters arriving in Syria's northern region of Afrin, with a portrait of the Kurdistan Worker's Party (PKK) leader Abdullah Ocalan seen on a banner in the background. - GEORGE OURFALIAN/AFP via Getty Images

Clashes between Iraqi security forces and a Yazidi militia known as the Shingal Resistance Units (YBS) may represent one of several new fronts in escalating tensions between Iran and Turkey in Iraq.

The most recent Turkish military operation, called Operation Claw Lock, is the latest phase of a campaign begun in 2019 to purge PKK bases in the region.

Defense Minister Hulusi Akar said the present effort seeks to shut down all PKK access routes from Iraq into Turkey.

Turkey’s military actions are complemented by official Turkish-Syrian contacts, brokered by Moscow, to address a shared interest in containing Kurdish ambitions in Syria, along the lines of the 1998 Adana agreement between Ankara and Damascus regarding the PKK.

Turkish Foreign Minister Mevlut Cavusoglu said last week that in “recent days” Syrian government forces were “seriously” fighting the People’s Protection Units (YPG), the backbone of the SDF, which Ankara equates with the PKK. “We support Syria’s territorial integrity, and the YPG-PKK have a plan to divide Syria,” Cavusoglu said.

In Iraq, both Baghdad and the Kurdistan Regional Government have publicly condemned Turkish attacks on PKK positions as violations of the country’s sovereignty, but these protests haven’t expanded beyond pro forma demarches.

Turkey has conducted cross-border operations against the PKK and maintained bases in northern Iraq since the 1980s, when Saddam Hussein was Iraq’s president.

The Kurdistan Democratic Party (KDP), which leads the KRG, maintains close ties with Ankara and acrimonious ties with the PKK, although the PKK has some support among Iraqi Kurds.

And, as we describe below, Baghdad also has an interest in curbing the PKK, which has led some observers to speculate that Baghdad may have acquiesced in the operations in Sinjar and elsewhere.

Baghdad and Ankara prefer that the Turkish operations be confined to the remote mountain regions, but that has not always been the case.

Recent clashes between Iraqi and YBS in the Sinjar district of Nineveh province signal a new front in these overlapping tensions.

Both the KRG and Baghdad claim administrative control over the area, which is a key border crossing point into Syria, and PKK entry point into Iraq.

Sinjar is one of two major population centers for Iraq’s Yazidi minority. In 2014, Islamic State (IS) terrorists took control of the area and undertook a genocidal campaign, including selling thousands of Yazidi woman as sex slaves.

The PKK helped train and support the YBS, assisting the flight and the return of Yazidi refugees, and fighting IS, complementing efforts by the US-led military coalition in 2014. After IS had been driven from the region, the PKK-backed YBS maintained influence.

The UN brokered the 2020 Sinjar agreement between Baghdad and Erbil which sought to expel armed groups, integrate the YBS into local security forces, facilitate the return of displaced people to their homes, accelerate reconstruction, and improve public services.

“The agreement remains on paper,” writes Amberin Zaman. “The YBS-affiliated Sinjar Democratic Autonomous Council continues to prevail over Sinjar while a rival, pro-KDP government in exile sits in Dohuk. The agreement has been sharply criticized for failing to take local communities’ views into account.”

The US backs the Sinjar agreement, but there are concerns in in the international community and among Yazidis themselves that the Iraqi approach to the YBS is focused more on disarmament than integration.

Iraqi forces are seeking to dislodge the Yazidi fighters to reestablish authority over the region — a shared interest of the Turkish government, which sees the YBS as allied with the PKK, and has threatened to send its own troops to invade Sinjar.

Iraq is also dealing with an increase of drug smuggling across the border with Syria; Shelly Kittleson has the report here.

And Tastekin here discusses Turkey’s plan for a border wall.

A recent Pentagon Inspector General report warns that the Turkey-PKK conflict contributes to instability in Iraq, in part because Iran-aligned militias in the area are backing the PKK.

The Defense Intelligence Agency (DIA) assesses that the PMU “probably calculate that their attacks against Turkey will deter Turkey from attacking the PKK in federal Iraq while enhancing their public image as defenders of Iraqi sovereignty,” according to the Pentagon report.

“The Pentagon’s assessment raises questions as to the extent to which cooperation between the Iran-backed militias and PKK-linked groups has spread beyond northwestern Iraq’s Sinjar region, where both Baghdad and Ankara have sought to dislodge militants affiliated with both factions,” Jared Szuba reports.

Iran’s former ambassador to Iraq, former IRGC official Iraj Masjedi, last year called on Ankara to withdraw its troops from Iraq, adding that Turkey had no justification to intervene in Sinjar, as Szuba reports.

Iran-backed militias are reportedly behind a string of missile attacks on Erbil since March, and most recently on May 1, but few have targeted US facilities, as Kittleson reports here.

The attacks on the Kurdistan Region are considered to be linked to Iran’s attempt to influence government formation in Iraq. Negotiations for a new government have been stalled since elections in October 2021. Iran wants a compromise among all Iraqi Shia parties.

Iran has sought to exert pressure on the KDP, which is aligned with Iraqi populist cleric Muqtada al-Sadr in the Saving the Homeland Alliance, which has the majority of seats. Iran would prefer an accommodation between the alliance and the rival Coordination Framework, composed of Shia parties aligned with Iran.

Ali Mamouri has the latest here on Iraqi government formation.

The attacks on Erbil may also be intended as a message to Turkey over the KDP’s oil and gas exports via Turkey, another front in their contest for influence in Iraq. Iran is loath to encourage alternative gas export opportunities for the KDP, while its own oil and gas industry remain under sanctions. The outcome of negotiations with the US and world powers over the Joint Comprehensive Plan of Action (JCPOA), or Iran nuclear deal, which would lift sanctions on Iran’s energy industry, remains uncertain.

From the most recent Pentagon Inspector General Report on ‘Operation Inherent Resolve’, the US led mission to defeat Islamic State: