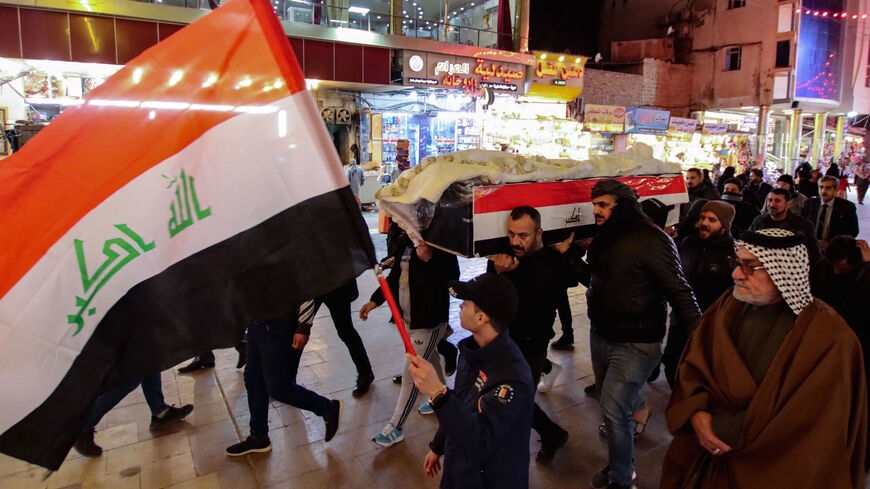 Mourners carry the casket of one of eleven Iraqi soldiers, killed in an overnight attack by the Islamic State (IS) group against a base in eastern Iraq, through a street in the central holy shrine city of Najaf, on Jan. 21, 2022. - ALI NAJAFI/AFP via Getty Images

Iraq’s Federal Supreme Court will decide on Jan. 25 whether the election of Mohammed al-Halbousi on Jan. 9 to return as Speaker of the Council of Representatives (or parliament) is valid. The speakership is held by a representative from the Sunni parties. Halbousi’s “Progress” party won 37 seats, second only to Iraqi populist Shiite Cleric Muqtada Sadr’s party winning 73 seats. Hassan Ali Ahmed has the background on the vote here.

The expectation is that Halbousi’s selection will stand and the process of government formation will resume. The parliament will then have about 20 days to choose a president from the Kurdish parties. Fifteen days after that, the president will designate a prime minister (a Shiite), appointed from the largest bloc, to form a government.

The current president, Barham Salih, has been nominated by the Patriotic Union of Kurdistan Party; the Kurdistan Democratic Party (KDP) has nominated former Finance and Foreign Minister Hoshyar Zebari. The KDP has 31 seats in the new Iraqi parliament; the PUK has 18. The custom has been for the PUK to hold the Iraqi presidency and the KDP to hold the Kurdistan Region presidency; the current Kurdistan Region president is Nechirvan Barzani from the KDP.

In an escalation of violence many see as connected to the government formation process, Shiite armed groups close to Iran, and who are linked to parties which lost support in Iraq’s October elections, have launched attacks in Baghdad over the past week.

As Shelly Kittleson reports from the Iraqi capital, “two Kurdish-owned banks in Baghdad were targeted by attacks using explosives on Jan. 16 in which a woman and child were injured. Iran-linked armed groups had recently increased threats against and attacks on the Kurdistan Region of Iraq and those associated with it. The latest in a long string of attacks by these groups on Baghdad’s heavily fortified Green Zone occurred on Jan. 13 and also injured an Iraqi woman and child.”

Ali Hashem has the inside story here at Amwaj on the visit to Iraq last week of Ismail Ghaani, commander of the Islamic Revolutionary Guards Corps Quds Force, in seeking to quell divisions among the disparate forces in the Iraqi “Shiite house.”

As the government formation continues, Islamic State is stepping up its attacks in both Iraq and Syria:

- Islamic State militants killed 11 Iraqi soldiers in a Jan. 21 attack on a military base in Diyala, north of Baghdad, Kittleson reports from Iraq.

- In Syria, the US-backed Kurdish-led Syrian Democratic Forces (SDF) killed 23 Islamic State IS militants, including those from Iraq, in clashes after IS attacked a prison in northeastern Syrian city of Hasaka on Jan. 20. Seven SDF members were killed in the attack on the jail, as Kittleson reports.

- On Jan. 19, in Tarmiya, 50 miles north of Baghdad, Iraqi military forces and loval Popular Mobilization Units (PMU) killed three IS militants in retaliation for the killing of two PMU fighters, Kittleson reports. In prior weeks, Iraqi security forces had clashed with IS fighters and killed IS suicide bombers before they completed their mission.

- On Jan. 13, the Iraqi Air Forces bombed IS encampments in the Tarmiya region.

“Administratively in the southern part of the Salahuddin province but part of what is known as the Baghdad Belt, Tarmiya has been called the center of Salafi recruiting for the area and has often been key to access for insurgents to the Iraqi capital for those arriving from north of it, lying as it does between the road going north from the capital toward Kirkuk to the east and the road to the west going north toward Tikrit. There have been calls to "clear" Tarmiya that some say are actually part of an attempt at sectarian displacement of the area’s Sunni inhabitants.”

The most recent report from the Pentagon’s Inspector General on Operation Inherent Resolve, the US-led diplomatic and military operation against IS in Iraq and Syria, indicates that IS has weakened but remains a priority for, and a threat to, US interests and partners in the region, as we reported here.

The quarterly report, which surveyed the period through September 30, noted that while IS has carried out a decreasing number of attacks, in some cases it has shown unusual complexity and a “higher level of operational maturity” in its operations.

And now the number of attacks may be going up.

The US mission in Iraq transitioned to “training, advising and intelligence gathering” on Dec. 31, and there is no expected reduction in the number of US troops in Iraq, currently at approximately 2,500.

The Pentagon report highlighted the Iraq-Syria border as a locus of IS activity.

A key border crossing between the Iraqi Kurdistan Region and northeast Syria, which had been closed since Dec. 15, has been partially reopened, as a result of US diplomacy.

Amberin Zaman has the scoop here on the US-led diplomacy which led to the border’s limited reopening for vital humanitarian assistance. The reason for the blockade was an escalation of border clashes between groups affiliated with the Kurdistan Workers Party (PKK), which is linked to the Kurdish parties in the SDF, and the Kurdistan Regional Government of Iraq (KRG).

…as Iraqi forces seek to reclaim control of Sinjar province

The Iraqi Army on Jan. 18 arrested several fighters from a Yazidi armed group operating in Sinjar in northern Iraq, an area of the country known for massacres of Yazidis by Islamic State in 2014, and now the scene of fighting among armed groups and Iraqi security forces.

Those arrested were from Sinjar Resistance Units (YBS) affiliated with the PKK, which provides the YBS with training and weapons, Shelly Kittleson reports from Iraq. The YBS claims it does not take orders from the PKK, which is designated a terrorist organization by Turkey, the US, and the EU

During his visit to Najaf on Jan. 6, Iraqi Prime Minister Mustafa al-Kadhimi ordered completion of the land pilgrim route linking Najaf to Mecca and Medina, the holy Muslim cities in Saudi Arabia. His announcement coincided with the official opening of Iraq’s Arar border crossing with Saudi Arabia.

The border openings are testimony to the dramatic improvement in ties between Riyadh and Baghdad under the current Iraqi government.

“The importance of the land pilgrim route travels beyond the religious dimension to the political rapprochement and economic and security cooperation between Iraq and Saudi Arabia in a region that witnessed many political and sectarian differences and pushed trust between the two peoples to its lowest levels,” writes Adnan Abu Zeed from Baghdad.

In Najaf, largest Islamic cemetery in the world

Nicole Di Ilio reports here on the largest graveyard in the world, known as the “Valley of Peace,” in Najaf.

“The ever-growing graveyard houses the remains of 5 million people, including hundreds of Islamic religious figures, such as the Prophet Hud and Prophet Saleh, clerics and political and social leaders. The cycle of life and death adds an inevitable load each year. The spiritual aura is tangible,” writes Di Ilio.

People in the Kurdistan Region capital, Erbil, awoke to a rare snowfall, bringing both excitement, and some challenges. Check out with video.