Recent airstrikes on areas close to the Iraqi capital as well as the killing of Islamic State fighters there have received scant attention as Iran-linked groups continue to carry out persistent attacks. 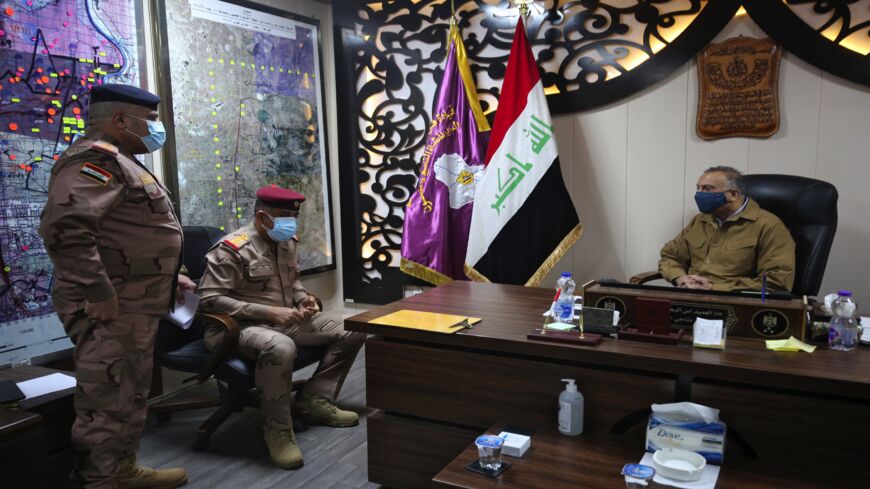 BAGHDAD — Tarmiya, roughly 50 kilometers north of the Iraqi capital, has in recent weeks been the scene of suicide bombers killed prior to reaching their target and airstrikes amid the dense groves of date palms, fields and orchards.

Late on Jan. 18, two members of the local Popular Mobilization Units (PMU) were killed in the area. An operation conducted the morning afterward in collaboration with the Iraqi National Security Service killed three IS fighters in a nearby area, with many social media accounts calling it “revenge for the martyrs” and noting that the security forces had prayed at dawn and then began the operation.

Yehia Rasoul, a spokesman for the Iraqi armed forces commander-in-chief, noted on Twitter that the IS fighters killed were “the commander of the so-called northern Karkh division of the Wilayat of Baghdad, Khalil Ibrahim Fayyad al-Jubouri, and his terrorist assistant nicknamed Saqr, alongside one of their companions nicknamed Abu Qais.”

The Tigris River marks the dividing line between the two administrative districts of Baghdad: the western side of Karkh and the eastern side, Rusafa.

Photos showed the bodies of three men next to what appear to be explosive belts.

A suicide bomber was also killed by security forces amid Tarmiya’s lush vegetation on Jan. 8 when at least five soldiers were injured in clashes with Islamic State (IS) cells active in the area. Photos posted online showed the body of the man killed, sprawled on the ground in the mud with his tactical gear and oranges scattered around.

On Jan. 13, the Iraqi air force carried out airstrikes in areas near both Tarmiya and Taji, which lies on the main road between it and Baghdad.

Security measures have been stepped up in the capital in recent days, with more military vehicles seen patrolling the streets and low-flying helicopters at times heard in the air late on Jan. 18.

The most recent attacks actually in the capital, however, are widely thought to have been by Shiite armed groups close to Iran and operating out of government control. These attacks are more likely to be the reason for the increased security measures, especially as tension over government formation talks continues.

Two Kurdish-owned banks in Baghdad were targeted by attacks using explosives on Jan. 16 in which a woman and child were injured. Iran-linked armed groups had recently increased threats against and attacks on the Kurdistan Region of Iraq and those associated with it.

The latest in a long string of attacks by these groups on Baghdad’s heavily fortified Green Zone occurred on Jan. 13 and also injured an Iraqi woman and child.

Administratively in the southern part of the Salahuddin province but part of what is known as the Baghdad Belt, Tarmiya has been called the center of Salafi recruiting for the area and has often been key to access for insurgents to the Iraqi capital for those arriving from north of it, lying as it does between the road going north from the capital toward Kirkuk to the east and the road to the west going north toward Tikrit.

There have been calls to "clear" Tarmiya that some say are actually part of an attempt at sectarian displacement of the area’s Sunni inhabitants.

Following a July 2021 suicide bombing in Baghdad’s eastern, Shiite-dominant, largely poverty-stricken neighborhood of Sadr City that left dozens of people dead, rumors that the attackers had gained access to the capital via Tarmiya led to much-enraged speculation about what should be done to ensure that terrorists could not use the lush vegetation — in a country suffering from a dire lack of this amid climate change and severe drought — to hide in.

It was later announced that the attackers had come from other areas.

The commander of a local Sunni PMU, Ibrahim Abdo al-Mashhadani, vowed in late 2021 that Tarmiya would become “the shield of Baghdad” instead of a danger to it.

Many prominent members of both al-Qaeda and IS have come from the Mashhadani tribe, which is spread across both Iraq and Syria but with the highest concentration in Tarmiya.

The top-ranked member of the tribe, Emir Salem Shams Hamad al-Thayr, and at least one other prominent local sheikh of the tribe have been targeted in alleged assassination attempts since early 2021.

In a 2018 interview in Baghdad with this journalist, the emir said that he could only go back to Tarmiya undercover due to the risk involved.

Tarmiya native and former head of the Arab Awakening for northern Baghdad Sheikh Saeed Jassim al-Mashhadani, who this journalist had also interviewed in December 2018 at his Tarmiya home, has also been targeted and had to leave the town for some weeks.

Notably, he briefly went to the Kurdistan Region of Iraq where Sunnis have increasingly found refuge in recent years prior to returning to his home.

Three of the sheikh's sons were killed in attacks by or fighting against al-Qaeda and IS over the years.

Some 40 kilometers from Baghdad on the road toward Tarmiya is the town of Taji, known for its jail and a base that used to host international forces and was repeatedly attacked by armed groups close to Iran.

The base has often been targeted in attacks widely attributed to Shiite armed groups operating outside of central government control, who claim that there are still US soldiers on the base.

However, the international coalition officially handed over the base on Aug. 23, 2020.

An attempted drone attack was reported on Jan. 15 on the Balad air base further north of Tarmiya, also in Salahuddin province. This base no longer officially has any international coalition forces either.