IS targets rural area near Baghdad

Tarmiya, a rural area near Baghdad, is in the sights of the Islamic State; sleeper cells there are spreading through the Mashhadani tribe. 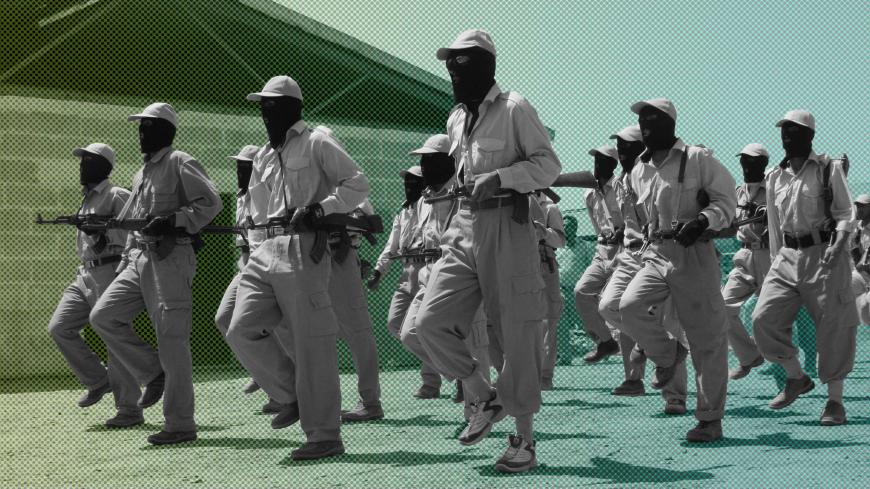 Masked members of a neighborhood patrol march in their camp in Tarmiya, Iraq, May 28, 2008. - REUTERS/Omar Obeidi

RAWAD, Iraq — An insurgent-prone rural area less than 30 miles from Baghdad continues to suffer attacks and is virtually a no-go area even for some leaders of its dominant tribe.

The area, Tarmiya, has been hit by repeated attacks and attempted ones in recent months. On May 1, over 20 members of the Albu Faraj tribe were killed in a night attack that the Islamic State claimed responsibility for through its media outlet.

The Mashhadani tribe is the largest in the area and the greatest concentration of the largely Sunni tribe in the country is also there. Several high-ranking members of al-Qaeda and the Islamic State (IS) were from the tribe.

One, Khalid al-Mashhadani, was the highest-ranking Iraqi in al-Qaeda in the country at the time of his arrest in 2007. He has since been executed.

Sheikh Mansour al-Mashhadani, a "spiritual leader" of the group who played a key role in recruiting for al-Qaeda, was reportedly killed in an airstrike in 2006. He had previously been arrested by the US military in July 2004 for ties to the Salafi armed groups Ansar al-Islam and Ansar al-Sunna but was later released.

The top-ranked leader of the tribe worldwide, Emir Salem Shams Hamad al-Thayr, sat down for an exclusive interview with Al-Monitor at his Baghdad home. Most of the tribe is in Iraq and but a sizable number are also across the border in Syria.

It is considered to be a tribe with direct descent from the Prophet Muhammad.

Discussing who might succeed IS leader Abu Bakr al-Baghdadi if Baghdadi were to die, terrorism expert Hisham al-Hashimi told CNN in 2015 that Sheikh Younis al-Mashhadani would be a likely candidate due to his claim to descend from Muhammad’s family.

However, Hashimi told Al-Monitor that nothing has been known for certain about the sheik’s whereabouts since 2012 and that "he may have been killed or he may be outside of Iraq."

Salem, a former engineer who has only held the emir position the past three months following his brother’s death, told Al-Monitor that "at least 80% of the people in Tarmiya are from the Mashhada."

"Even the other tribes in the area come to us whenever they have a problem" and have done so for several generations dating back to Ottoman times, he said.

The emir denied knowing who any of the top-level IS or al-Qaeda figures were, saying that "this is a political question" and that he did not want to discuss it.

However, he said anyone involved in terrorist organizations is banned from the tribe, although their family members are not, "in accordance with the Quran" and Iraqi national law.

Clutches of date palms rise behind blast walls flanking the road in northwestern Baghdad toward Tarmiya through the Hurriya district, followed by a confusion of checkpoints and heavy traffic to and from the capital. Nearby is al-Kadhimiya, where a popular Shiite shrine is located. Tarmiya is near the village of Rawad.

Two suicide bombers were reportedly killed in Tarmiya by security forces in April; the bombers apparently were planning to attack the shrine, which is visited by millions of Iraqis and foreign Shiites every year.

Hashimi told Al-Monitor that both Khalid al-Mashhadani and Sheikh Younis were originally from Hurriya area. He said that both men had "long been involved with the Salafi movement" and that Tarmiya is "the center of Salafi recruiting in the Baghdad area."

The Mashhadani emir now lives near Hurriya but can only go back to Tarmiya undercover, he said, with very few people ever knowing about his plans due to persistent risk.

Salem said the continued danger of insurgent attacks stems from Tarmiya being a large area with a lot of agriculture and open spaces and that no one knows who is conducting the attacks.

The emir presents himself as a progressive man, noting that his four married sons all wed members of other tribes that they had chosen for themselves, that his daughters and daughters-in-law had professional careers and that neither he nor any of sons had more than one wife.

He said he was encouraging the people in his tribe to stop the still-common practice of polygamy — legal in Iraq — by stressing that in this way they can provide a better future for their children. He said, "Men can never be equal in their treatment to more than one woman, which is a requirement in the Quran." He said, however, that men and women "still live very separate lives in Tarmiya, with many not going to university" and that the situation continues to be different there.

Members of the Mashhada tribe said they would not be willing to risk their lives by bringing a foreigner in and members of other tribes refused as well, even if official permission were granted.

Along the road from Baghdad to Tarmiya is the Taji prison, where IS conducted a major attack on in 2013 alongside one on the Abu Ghraib prison. Hundreds of inmates reportedly escaped.

A sheikh of the Albu Faraj tribe, which was targeted in the May 1 attack, told Al-Monitor in an interview in a village near Tarmiya that the area had a local armed militia but that its fighters were not receiving salaries and that this was a major problem.

Tarmiya’s location between the two main highways going north from Baghdad — one to Mosul and the other to Kirkuk and then Erbil — makes it attractive terrain for insurgents seeking to regroup in rural areas near the capital.

A continuing lack of security continues to be of concern, especially if even tribal leaders are wary of being in the area. For now, access is highly restricted but attacks continue to occur.