Coalition withdrawal from base near Baghdad worries locals

The recent pullout of international coalition personnel from Camp Taji, the first airstrike in years in an area close to the capital, and continued targeting of facilities keep tensions high as the drawdown continues. 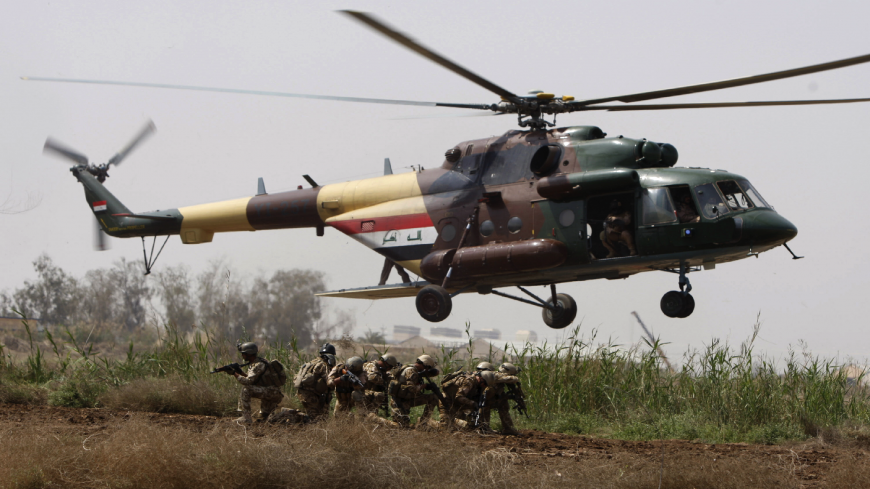 Iraqi soldiers take position as they disembark from an MI171 helicopter during a joint land and air training with US soldiers from 1st Air Cavalry Brigade at Camp Taji, 25 kilometers north of Baghdad, on March 29, 2010. - AHMAD AL-RUBAYE/AFP via Getty Images

ERBIL — Mortars and rockets continue to target Baghdad facilities hosting personnel from the international anti-Islamic State (IS) coalition, for the most part causing little to no material damage as the drawdown of international coalition troops in the country continues.

On Sept. 7, three rockets reportedly targeted the Baghdad International Airport, one of which damaged four vehicles belonging to civilians in the parking lot.

The following day, an Iraqi Interior Ministry circular seen by Al-Monitor warned security and logistics companies operating in the country with contracts with the United States that intelligence had discovered their locations had been shared and they were now under greater threat.

The shooting at the Baghdad facilities appears to be harassment not intended to inflict major damage or take lives; otherwise, the attacks might result in reactions that the presumably Iran-linked armed groups claiming responsibility for them may be trying to avoid.

The latest handover of facilities used by international troops was the Iraqi Camp Taji base north of Baghdad Aug. 23.

International coalition spokesperson Col. Myles B. Caggins III told Al-Monitor during an interview Sept. 4 at the Erbil airport base that the drawdown is due to the success of Iraqi security forces and not the persistent threats from various armed groups that continue to operate in the country.

“The coalition, during 2020, has moved out of our small compounds inside Iraqi bases. We’ve departed eight bases as a result of the success of our partners in Iraq and the campaign against [IS]. Most recently we departed Taji base. At Taji base we transferred $347 million of military equipment, ammunition and improved facilities, including a newly paved runway, to the Iraqi security forces,” Caggins noted.

The town of Taji has a prison that in previous years was subject to a major jailbreak by al-Qaeda militants and continues to house prisoners convicted of terrorism.

It is around 30 kilometers (18 miles) north of Baghdad and just west of the town of Husseiniya, where tribal fighting broke out in late August. It is just south of Tarmiya, where an airstrike reportedly targeting IS fighters occurred Aug. 21 — the closest to the capital in many years.

Despite its potential for being a gateway to the capital for terrorists, many of the attacks this year have instead been from pro-Iran Shiite armed groups, which have long demanded Western forces depart the country entirely.

He said the problem was that the withdrawal “paves the way for factions” — he did not specify what he meant by factions, though this term is often used in Iraq to refer to Iran-linked Shiite armed groups — “to tamper with security in this area, which is considered the food basket of Baghdad. Most of those who live in these areas are Sunni. The largest is the Mashhadani tribe, whose lineage goes back to the descendants of the prophet.”

The sheikh — who asked not to be named, citing security concerns that may result from his speaking to Western media — noted there is also a significant number of members of the Dulaim tribe in the area, which also has a large presence in western Iraq's Anbar province.

Many leaders of both al-Qaeda and IS were members of these two tribes, including Khalid al-Mashhadani, who was the highest-ranking Iraqi in al-Qaeda in the country at the time of his arrest in 2007 and was later executed.

Tarmiya is between the road going north from the capital toward Kirkuk to the east and the road to the west going north toward Tikrit. It is thus strategically located but also has long been known as the “center of Salafi recruiting in the Baghdad area,” as Al-Monitor was told in 2018 in an interview with counterterrorism expert Hisham al-Hashimi, who was assassinated in Baghdad in early July. No one has been charged with his murder.

Caggins said that “currently, the coalition and US troops operate primarily on three bases: in Baghdad, at Ain al-Asad air base in Anbar province and at the Erbil base in Iraq’s Kurdistan Region. There are additionally some special operations and locations where they are partnered with Iraqi commandos for anti-[IS] operations.”

Kadhimi has been the director of the Iraqi National Intelligence Services since 2016. He was sworn in as prime minister May 7. One of his pledges was to bring armed groups operating in the country under state control.

“In the past year, outlaw groups have attacked a variety of Iraqi bases that host coalition troops as well as diplomatic facilities,” Caggins noted in the Sept. 4 interview. “These attacks have occurred seemingly randomly and based on where these outlaw groups are able to fire rockets at those facilities. There have been Iraqi troops harmed, Iraqi equipment used for the Iraqi anti-[IS] fight damaged, and recently we have seen a spike and a spate of Iraqi-contracted logistics civilian convoys where outlaws have set roadside bombs to damage and even kill civilian Iraqi drivers who are carrying coalition equipment out of Iraq.”

Meanwhile, concerns remain that if the area north of Baghdad is deprived of an international coalition presence and tribal fighting and the presence of non-local armed groups continue to be seen, the capital could be ever more exposed to risk.

The Tarmiya sheikh noted in the WhatsApp interview, however, that he had been impressed by the July 20 visit by Kadhimi to his town, as it marked “the first time since 2003 that a prime minister has visited the area,” long considered too dangerous, and that it had led to the “easing of tension” among locals, implying that such gestures are important for security in general.