The Iraqi prime minister stressed unity in Tarmiyah, where the Islamic State claims responsibility for killing the general. 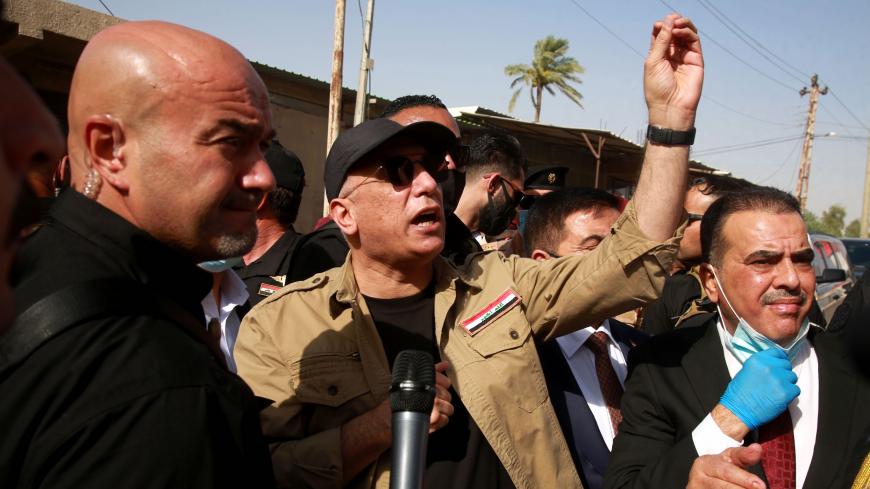 Prime Minister Mustafa al-Kadhimi visited the town of Tarmiyah, near the Iraqi capital, on July 20 after a sniper killed the commanding general in the area three days before.

Sunni-majority Tarmiyah has long been seen as an insurgent-prone area and lies roughly 50 kilometers (30 miles) north of Baghdad, between two main arteries: The road to Kirkuk lies just east of it and the road to Tikrit to the west.

Kadhimi’s visit seems to have been intended to dispel rumors of sectarian plans by Shiite armed groups to “take over” or retaliate against the Sunni town, as well as to foster a greater sense of security in a country struggling under the weight of security, public health and economic issues.

Tarmiyah is surrounded by groves of trees, dense vegetation and farmland. It has in previous years been used by insurgent groups as a recruitment center and a foothold close to the capital in which to hide both men and weapons.

Kadhimi, who has been commander-in-chief of the armed forces since he was sworn in as prime minister on May 7 and head of national intelligence since 2016, walked through the crowded streets and called the people of Tarmiyah “our people.” He noted while meeting with security chiefs in the town that efforts were underway to revive the sectarianism that had plagued the country in previous years and that his government would address the issue.

Just over two weeks before he was killed on July 17, Gen. Ali Hamid Ghaidan al-Khazraji had taken part in a military operation in Tarmiyah to clear it of Islamic State remnants.

Khazraji, commander of the 6th Infantry Division’s 59th Brigade, was in a large convoy of armored vehicles when he was targeted by a sniper, a local resident told Al-Monitor in a July 19 WhatsApp exchange.

IS claimed responsibility for his killing.

The Tarmiyah resident — who this journalist had previously met with in Baghdad — said, “There are concerns some of the men protecting the general had been compromised,” and asked, “How else could the sniper have known exactly which vehicle he was in?”

The source went on to say that he would be “killed if you use my name because there are IS sleeper cells in my area,” close to where the general was killed, but also noted that Khazraji had prevented an unnamed armed group from firing rockets at the Taji base “about two months ago.”

He noted that Khazraji had been very popular but that after that incident he had heard that “militias operating in the area” wanted to get rid of him.

The source claimed that these armed groups wanted to enter Tarmiyah and cut down the orchards, destruction he said would lead to “the displacement of inhabitants.” He noted that there is a large contingent of various forces surrounding the city now, frightening residents.

A different security source from Tarmiyah had told this reporter in early 2019 that a previous commanding officer had been under investigation for being in indirect contact with IS through local Tarmiyah residents from the Mashhadani tribe and that the security situation had improved significantly after the commander was replaced.

Sheikh Saeed Jassim al-Mashhadani, who this journalist interviewed in December 2018 at his Tarmiyah home, told Al-Monitor in a WhatsApp message on July 19 that “everyone in the area loved Gen. Khazraji” and that despite this attack, security in the area is good.

The sheikh is the former head of the Arab Awakening in northern Baghdad. Three of his sons were killed in attacks by or fighting against al-Qaeda and IS. He was in one of the photos with Kadhimi during the prime minister's visit and is generally seen as one of the more powerful dignitaries in the town.

Several security incidents in and near the capital have raised concern in recent weeks.

The July 6 assassination of Iraqi counterterrorism and security expert Hisham al-Hashimi in Baghdad by as yet unknown perpetrators — though many believe the Iran-linked armed group Kataib Hezbollah may have been behind it — and continued rocket attacks on the Green Zone by anti-US armed groups mean there are several sources of potential unrest and violence.

Hashimi had spoken out against Iran-linked armed groups in the country in the months prior to being killed but had long been known mostly as the go-to expert on jihadists in Iraq.

In a 2018 interview, Hashimi told Al-Monitor that Tarmiyah was “the center of Salafi recruiting in the Baghdad area.”

Hashimi also said that IS had continued to profit from fish ponds in the Tarmiyah area, among other sources of funding for the group, after Iraq officially declared victory against the transnational terrorist organization in December 2017.

Several top-level al-Qaeda and IS leaders are originally from Tarmiyah or the surrounding area and many are from its largest tribe, the Mashhadani. Khalid al-Mashhadani, for example, was the highest-ranking member of al-Qaeda in Iraq when he was arrested in 2007. He is from the Hurriya area in northern Baghdad along the road toward Tarmiyah.

Camp Taji, which in recent months has come under repeated attack from armed groups unhappy with the presence of the US-led international coalition in the country, is also between Baghdad and Tarmiyah.

A May 26 Danish unclassified situational and threat assessment cited Shiite militias as a “political and military threat” and noted that the “Taji base in northern Baghdad is particularly vulnerable” to attacks.

The United Kingdom announced July 16 that British troops had pulled out of the base. The NATO-led training mission, which will be led by Denmark starting in December, is for the moment set to continue at the base. The plan may change if the attacks continue, however.

The area north of Baghdad is key to security in the capital. Iraq will be ever less able to depend on coalition assistance and intelligence if the presence of the international coalition continues to be reduced in the country, as is expected.

With his visit to the town, Kadhimi seems to be trying to reassure residents that the state will not allow armed groups to act with impunity nor let sectarianism flourish. For him to do so effectively, however, the perpetrators of these attacks in and around the capital will have to be found and prosecuted.