The suicide attack on the Shiite-dominated Sadr City district of Baghdad on July 19 that killed at least 35 people has led some pro-Iran militias to demand vengeance against Sunnis near Baghdad. 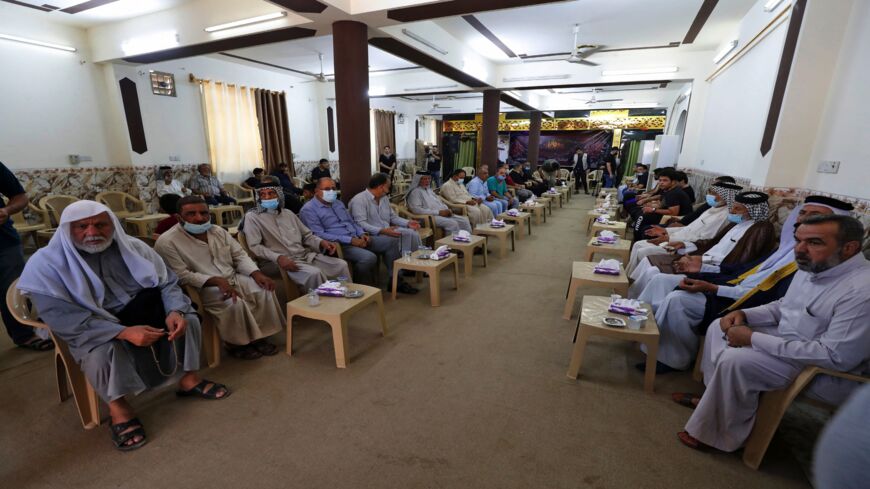 Iraqis attend a funeral for an Iraqi family killed in an explosion a day earlier in a popular market in the Shiite-majority Sadr City neighborhood, east of the capital, Baghdad, on July 20, 2021. - HMAD AL-RUBAYE/AFP via Getty Images

Shortly after a suicide bombing in Baghdad’s eastern Shia-dominant, largely poverty-stricken neighborhood of Sadr City on July 19, speculation ran rife that the attack originated from a Sunni-majority town roughly 50 kilometers (30 miles) north of the Iraqi capital.

Concerns about the potential for rekindling sectarianism were raised. An Arabic hashtag that translated as “Tarmiya is blowing us up” placed blame on the Sunni-majority town and surrounding area north of Baghdad, rich in agriculture, orchards and dense vegetation.

Prime Minister Mustafa al-Kadhimi announced the arrest of a “terror cell” on July 24, and it was reported early the next day that men from Anbar and Kirkuk had been arrested in connection with the attack.

At least 35 people were killed in the attack on the densely populated Shia area of the capital, which happened on the eve of the important Muslim holiday of Eid al-Adha, or the Feast of Sacrifice. Many families with children were shopping at the market when the suicide bomber detonated his vest.

The Islamic State (IS) claimed the attack and said that one of its adherents known as “Abu Hamza al-Iraqi” had been “martyred” in it. It did not, however, give any other details about the attacker.

The various IS “wilayat” or provinces throughout the world claimed a total of 1,414 attacks in the first half of 2021, with the highest number by far of which were carried out in Iraq.

A year before, in late July 2020, Prime Minister Mustafa al-Kadhimi had visited Tarmiya after the commanding general of the area was shot dead by a sniper in an attack that was also claimed by IS. The visit was meant to reassure residents amid fears that any IS incident in or linked to the town might be exploited by Shia armed groups to push locals out of the area.

A source close to the top sheikh of the Mashhadani tribe — the dominant one in the town — told Al-Monitor in an online conversation on July 23 that “there is no evidence that the suicide bomber was from Tarmiya” and this is “simply being used as an excuse” to portray his native town as a danger to the Iraqi capital.

Tarmiya native and former head of the Arab Awakening for northern Baghdad Sheikh Saeed Jassim al-Mashhadani, who this journalist interviewed in December 2018 at his Tarmiya home, told Al-Monitor in a WhatsApp message on July 24, 2021, that the security “situation is very good at the moment. And it is not true that the attacker was from Tarmiya.”

Three of the sheikh's sons were killed in attacks by or fighting against al-Qaeda and IS over the years. He has also been threatened and targeted repeatedly.

Electricity lines were also attacked in June in Tarmiya — as they were in several places across the country — amid suffocatingly high temperatures and around the same time as Iran cut off its power supply to Iraq.

Well-known counterterrorism expert Hisham al-Hashimi in a 2018 interview with this journalist called Tarmiya “the center of Salafi recruiting in the Baghdad area.”

Hashimi had also said that IS had continued to profit from fishponds in the Tarmiya area as one of several sources of funding for the group, after Iraq officially declared victory against the transnational terrorist organization in December 2017.

(Hashimi was gunned down outside his home by two men on a motorcycle in July 2020. His assassination is widely believed to have been ordered by the Iran-linked Shia armed group Kataib Hezbollah. On July 16, Baghdad announced the arrest of the man alleged to have carried out the killing, and in a televised interview he said he traveled from the region known to house Kataib Hezbollah's headquarters to Baghdad to carry out the assassination.)

On January 21, a massive double suicide attack also claimed by IS killed dozens and injured over 100 people. It was the first suicide attack in the capital since one in the same place — Tayaran Square — in 2018. The prime minister removed a number of security officials from their positions immediately after that attack, including Falcon Cell Intelligence Unit chief Abu Ali al-Basri.

The Falcon Cell had been key to many arrests and killings during the war against IS. Some claimed Basri had grown too close to Iran-linked factions, but many were surprised by the decision and thought it was likely to have a negative effect on operations against IS. He had led the elite unit since its founding over 10 years before. After IS leader Abu Bakr al-Baghdadi was killed in 2019, he told this journalist in an interview later that year that he wanted to set up a cell to counter corruption since “terrorism generates corruption and corruption generates terrorism.”

In the past few months, several attacks have occurred in Sadr City. One attack on another crowded market in Sadr City on June 30 injured at least 15 people, while in mid-April a car bombing claimed by IS killed four and injured 20 others in the same area.

It is unclear why Sadr City would be targeted by IS more than other areas of the capital other than it being densely populated. Many of the young men taking part in the initial protests of late 2019 that eventually led to the fall of the previous government came from this area. They and their relatives had lamented to Al-Monitor at that time of rampant joblessness and lack of basic health care and other services.

There is evidence that IS cells are operating in the northern Baghdad belt where Tarmiya is located.

However, many say that Iran-linked armed groups would like to clear the area of its Sunni natives and seek any possible justification for doing so.