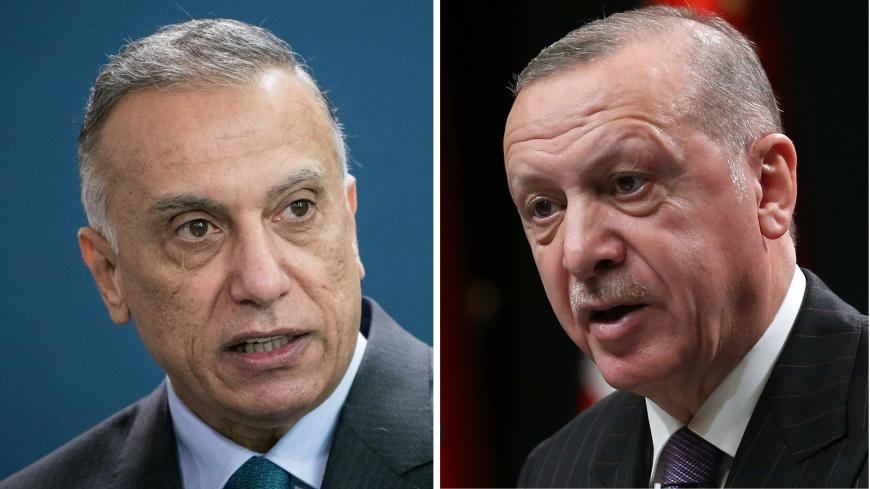 Iraqi Prime Minister Mustafa al-Kadhimi was in Ankara this week for meetings with Turkish President Recep Tayyip Erdogan. Both countries want strong bilateral ties. They share a border, as well as common water sources, the Tigris and Euphrates rivers, which flow to Iraq from Turkey. There is also talk of expanding energy cooperation and trade.

But the headline was their deepening commitment to counterterrorism cooperation — including against the Islamic State (IS), but more surprisingly against the Kurdistan Workers Party (PKK). Baghdad’s already thin patience with the PKK’s presence in Iraq, and the problems this causes in Iraqi-Turkish relations, is growing short.

Erdogan: "No place for separatist terrorism" in Turkey, Iraq and Syria

The PKK is considered a terrorist group by Turkey, the United States and some European countries. The PKK has kept a base in the rugged Qandil mountains of Iraqi Kurdistan, on the Turkish border, going back to the time of Saddam Hussein. Episodic Turkish military operations against the PKK in Iraq have at times sparked Iraqi protests over violations of sovereignty, but the preference in both Ankara and Baghdad has been to keep any friction on the PKK contained, as the PKK is an unwelcome guest.

The PKK can be a sensitive matter for the Iraqi Kurdistan Regional Government (KRG), led by the Kurdistan Democratic Party (KDP), which maintains good ties with Ankara. The KRG has at times sought to crack down on the PKK, but not always in a heavy-handed way, as the PKK is popular in some non-KDP areas of Iraq.

As Amberin Zaman's piece suggests, if the PKK hoped its increased activities would force Iraq to draw a line with Ankara, they surely will be disappointed. There was reason for that line of reasoning: Turkish attacks on the PKK over the past year have killed dozens of Iraqis, including two senior Iraqi commanders. Baghdad-Ankara relations suffered. Iraqi Kurdistan Region President Nechirvan Barzani intervened to cool tempers in Baghdad in advance of Kadhimi’s visit. The PKK then crossed another red line in a firefight with KDP peshmerga forces on the Iraq-Turkey border Dec. 13, which left one peshmerga dead, as we report here.

But instead of a break between Iraq and Turkey, the PKK pushed itself to the center of the Iraq-Turkey counterterrorism agenda. A Baghdad-Erbil agreement in October called for PKK fighters to leave Sinjar, in Ninevah province, as Shelly Kittleson reports, where the PKK has maintained ties with a Yazidi PMU. The Iraqi position, backed by the KRG, is not to escalate tensions with Turkey, but to crack down on the PKK. The KRG had increased the number of checkpoints as part of its crackdown on the PKK, as Joe Snell reports.

“We have reaffirmed our consensus to enhance cooperation in this regard," Erdogan said at a press conference with Kadhimi on Dec. 17. "Let me reiterate that there is no place for separatist terrorism in the future of Turkey, Iraq and Syria."

In response, Kadhimi said, "There is no question of tolerating any organizations that threaten Turkey’s national security on our territory.”

KRG-PUK friction spills over into Syria

At the same time, Iraqi KRG tensions with the PKK spilled over into Syria on Dec. 16 as KRG Prime Minister Masrour Barzani issued a statement saying fighters from the PKK-linked People's Protection Units (YPG) had attacked the peshmerga.

The YPG is the backbone of the Syrian Democratic Forces (SDF), which have been the on-the-ground partner for the US military in battling the Islamic State in Syria.

"Tensions between the KDP and the PKK have been rising since the summer," Zaman reports, "when KDP forces deployed in Zine Warte, a strategic mountain pass linking the PKK’s main bases in the Qandil mountains along the Iran-Iraq border to valleys accessing the north and south. The move came as Turkey, which has thousands of forces deployed across Iraqi Kurdistan, launched a large-scale land and air offensive against the PKK. The operations, now slowed down by unfavorable winter weather, are part of a broader campaign to encircle and cut off the PKK’s strongholds in Amedi, Qandil and Yazidi-dominated Sinjar near the Syria border from one another."

Friction between the KDP and the YPG complicate already difficult negotiations, brokered by the US and SDF commander Mazlum Kobane,  between the Democratic Union Party (PYD), the political arm of the YPG, and the pro-KDP Syrian Kurdish National Council, to unify Syrian Kurdish ranks and dilute the influence of the PKK.

SDF boxed in by Russia, Turkey and Assad

Meanwhile, Turkey may be planning an assault against an SDF stronghold in the northwestern Syrian town of Ain Issa, writes Fehim Tastekin, prior to the administration of Joe Biden taking office.

And the winner of the endgame of such a threat, or action, could be Syrian President Bashar al-Assad.

"The relentless shelling forced the Kurdish-led Syrian Democratic Forces (SDF) into a trilateral deal with Russia and the Syrian army to set up three joint observation posts in the area, with the stated aim of monitoring a cease-fire agreed as part of the 2019 Sochi deal between Russia and Turkey," Tastekin reports. "Under the deal, the Kurdish forces pulled back 32 kilometers (20 miles) from the Turkish border. Ain Issa has remained under Turkish pressure even though it lies beyond that boundary at 37 kilometers (23 miles) from the border."

"Few entertain illusions that the deal amounts to an improvisation on the part of the Russians in order to ease tensions in the region," writes Anton Mardasov. "Russia and Turkey coordinated their efforts to undermine the SDF, even when the tensions between the two countries had escalated after the shootdown of a Russian Su-24 aircraft. Moscow also facilitated contacts between Ankara and Damascus on the Kurdish issue on different platforms, including through Algeria."

"Turkey may be unable to advance its own plans, but its pressure on the Kurds has led the SDF to acquiesce to sharing control with Damascus in yet another area," Tastekin concludes. "Ultimately, Ankara might consider Kurdish handovers of territorial control to Damascus a success. Yet, the objectives of its military presence also involve preventing the SDF’s integration into the Syrian army and constitutional status for the Kurds in a future Syria."

Don’t forget about the Islamic State

Meanwhile, the Islamic State is picking up its activities in both the Sunni regions of Iraq, as Kittleson reports, and in the Deir ez-Zor and Homs regions of Syria, as Sultan al-Kanj reports.