Reported border clash worsens conflict between Kurdish factions in triangle where US, Turkish and Syrian and Iraqi Kurdish forces come into play. 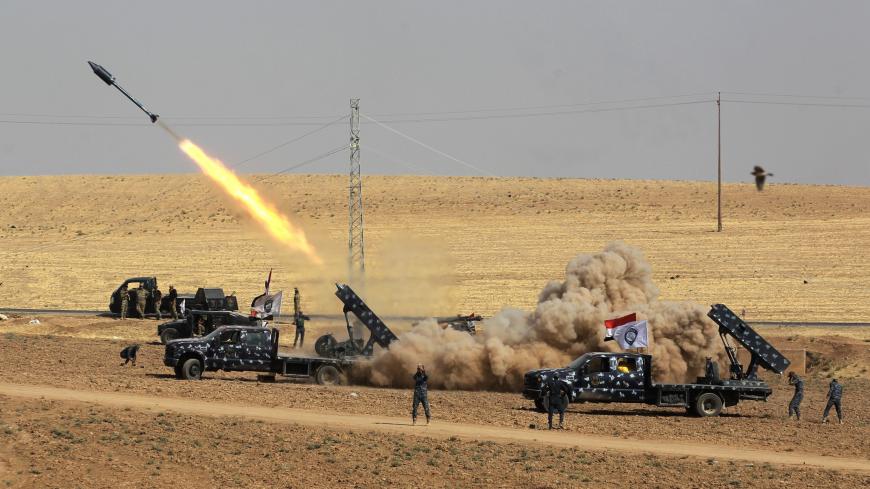 Iraqi security forces launch rockets against Kurdish peshmerga positions on Oct. 26, 2017, in the area of Fish Khabur at the Turkish and Syrian borders with the Iraqi Kurdish autonomous region. - AHMAD AL-RUBAYE/AFP via Getty Images

Tensions between the Kurdistan Democratic Party of Iraq (KDP) and the Kurdistan Workers Party (PKK) have sharply escalated amid claims that a PKK-linked Syrian militia that is backed by the United States attacked Iraqi Kurdish peshmerga forces early Wednesday, with potential consequences for the US-led coalition mission in Syria.

Masrour Barzani, prime minister of the Kurdistan Regional Government (KRG), issued a statement saying a large group of fighters from the People's Protection Units (YPG) had attacked the peshmerga using heavy weapons. The YPG is the dominant force in the US-backed Syrian Democratic Forces (SDF). “I call upon our friends and partners in the Global Coalition to ensure that the YPG does not repeat this act of aggression. The YPG cannot be allowed to exploit foreign assistance to launch attacks on our territory.”

He warned, “Any repeat would be seriously damaging to regional security.”

Sarbast Lazgeen, the deputy minister for peshmerga affairs in the KRG, told a news conference that eight PKK fighters had sought to cross into Iraqi Kurdistan south of the Fish Khabur border crossing and were warned away; the peshmerga forces were deployed near the Khabur River separating Iraq from Syria.

Lazgeen said three of the PKK fighters retreated but that the remaining five “kept proceeding as though they were trying to distract our forces.” Then a group of 50 to 60 armed men crossed over as well,” Lazgeen added, without elaborating.

“Such a misleading propaganda legitimizes policies adopted by the Turkish State, that aims at extermination of the Kurdish people, and poses grave dangers to the future of our people,'' it said.

A PKK source contacted via Signal in Iraqi Kurdistan said two fighters from its side had been wounded in the clash, though he declined to specify whether they were PKK or YPG fighters, adding that the standoff was continuing. He gave no further details. Barzani said the attack was repelled.

The confrontation comes just two days after a peshmerga fighter was killed in a separate clash between PKK and KDP fighters in the mountainous Amedi region of Dahuk province, which borders Turkey and Syria.

Turkish Foreign Minister Mevlut Cavusoglu, in a meeting Wednesday with his Iraqi counterpart Fuad Hussein, said Turkey would extend all possible support to Iraq in “efforts to eliminate the PKK terror group.”

Hussein was in Ankara, Turkey, ahead of Iraqi Prime Minister Mustafa al-Kadhimi’s official Dec. 17 visit to the Turkish capital. The PKK is expected to figure prominently in the talks.

Tensions between the KDP and the PKK have been rising since the summer, when KDP forces deployed in Zine Warte, a strategic mountain pass linking the PKK’s main bases in the Qandil mountains along the Iran-Iraq border to valleys accessing the north and south. The move came as Turkey, which has thousands of forces deployed across Iraqi Kurdistan, launched a large-scale land and air offensive against the PKK. The operations, now slowed down by unfavorable winter weather, are part of a broader campaign to encircle and cut off the PKK’s strongholds in Amedi, Qandil and Yazidi-dominated Sinjar near the Syria border from one another.

The Kurds’ internecine quarrels is grist for Turkey’s mill, providing Ankara with excuses to continuously expand its military presence in Kurdish-dominated territories beyond its borders.

The KDP has repeatedly called on both Turkey and the PKK to carry their fight elsewhere as Kurdish civilians continue to get killed in Turkish drone strikes, but to no effect. However, the KRG’s salvos against the YPG and the SDF casts a new and troubling twist on the affair.

Well-placed sources speaking on condition of anonymity to Al-Monitor said the KRG has asked the United States to condemn the SDF, its top ally in the fight against the Islamic State in Syria, over its alleged support for the PKK. Turkey has long made similar claims and demands to Washington and has repeatedly attacked and occupied SDF-run territory, most recently in October 2019.

The PKK is designated as a terrorist organization by the United States and the European Union.

One of the sources said the KRG was calling for a public statement from the Trump administration, while another said a private rebuke of the SDF was being sought. An SDF source who declined to be identified by name denied KRG allegations that the Syrian Kurdish force was facilitating the passage of YPG and PKK fighters into Sinjar. “These claims aren’t true and the Iraqis know that,” the official said.

The State Department did not respond to Al-Monitor’s request for comment.

In a Dec. 14 telephone call with the State Department’s special envoy for Syria, Joel Rayburn, Barzani “stressed the need for the SDF to free themselves from domination by the PKK and, in particular, not to allow the PKK to exploit the aid which it receives,” the pro-KDP Kurdistan24 news channel reported.

Iraqi Kurdistan’s Fish Khabur border crossing to northeast Syria is the main supply line for incoming humanitarian aid and for military and logistical supplies for coalition forces based in an area run by Syrian Kurds. The KDP is the dominant force on the Iraqi side of the frontier.

Should relations between the KDP and the SDF deteriorate, that access might be compromised for the 700 to 1,000 mainly American forces deployed across the border in Syria. Although it’s unlikely that the KRG would block the US supply chain, it could certainly turn the screws on the passage of individuals and commercial goods as well as on financial flows. SDF officials rely mostly on Erbil to fly to European and Middle Eastern capitals and beyond.

The KDP’s support has played a key role in ongoing unity talks between a KDP-friendly group of Syrian Kurdish opposition parties and the Democratic Union Party (PYD), which holds power in the Syrian Kurds’ autonomous administration. Rayburn reportedly asked Barzani to weigh in with the Kurdish National Council to ensure that the talks continue, though prospects are dimming with each new clash between the PKK and the KDP.

The talks have been paused until David Brownstein, a mid-career State Department employee who has succeeded Ambassador David Roebuck as deputy special envoy to the global coalition to defeat the Islamic State, returns to the region in January.

The SDF commander Mazlum Kobane is, together with the United States, a co-sponsor of talks that have been continuing in fits and starts since April. These, alongside the coalition’s ongoing efforts to root out Islamic State remnants, provide diplomatic cover for Washington’s continued engagement with the SDF. More critically they are supposed to dilute the PKK’s influence in northeast Syria so as to placate the Kurdish National Council and the KRG, but above all Turkey, which has been at war with the rebels since 1984. But as the PKK source put it, the PKK increasingly is seeing that the ultimate purpose of the talks “is to eradicate us altogether.”

That perception has placed Kobane in the awkward position of having to prove the opposite. The balancing act was on display when Kobane condemned the Dec. 14 attack by KDP forces against PKK fighters in Amedi that left one peshmerga dead.

Kobane called the attack “shameful” and said it “hurts the achievements of the Kurdish cause.” The tweet came on the heels of one castigating the perpetrators of a Dec. 13 attack on Kurdish National Council offices in the Syrian town of Darbasiyah that is thought to have been carried out by the PKK-linked Revolutionary Youth. Kobane did not identify the assailants. Also, an attack on a Kurdish National Council office in nearby Amuda took place Dec. 15, Turkey’s state-run Anadolu news agency reported.

An Iraqi analyst who closely monitors the Kurdish region said in emailed comments to Al-Monitor that the KDP sees Kobane “as an extension of the PKK in some way. At the same time [Kobane] has with the support of the Americans been able to establish control over the Syrian side [of the common border] and reduce the influence of the KDP in that area, which is something [the KDP] doesn’t like.”

The PKK source in the Iraqi Kurdistan region argued, however, that the root of the current tensions was Turkey, whose continued repression of its own large Kurdish minority is bloodily spilling over its borders into Syria and Iraq. “The KDP is not exercising its own will, but that of Turkey, because of its [economic] dependency on Turkey,” he said. Kurdistan’s oil, a main source of income, flows through a pipeline to Turkish export terminals on the Mediterranean Sea.

Others contend that that the KRG is seeking to deflect attention from snowballing economic woes and endemic corruption, which have led to bloody riots in Dahuk and more recently in Sulaimaniyah, which is ruled by the KDP’s main rival, the Patriotic Union of Kurdistan (PUK). KRG officials have accused the PKK of helping to incite the unrest. The PKK denies the accusations.

“On the one hand the KDP says the PKK are ‘guests’ in Iraqi Kurdistan and have no support or power, yet on the other they assign us the kind of agency to mobilize demonstrators. Which of those two statements are true?” the PKK source asked.