Yazidis have 'protectors' in Iraq, but question safety 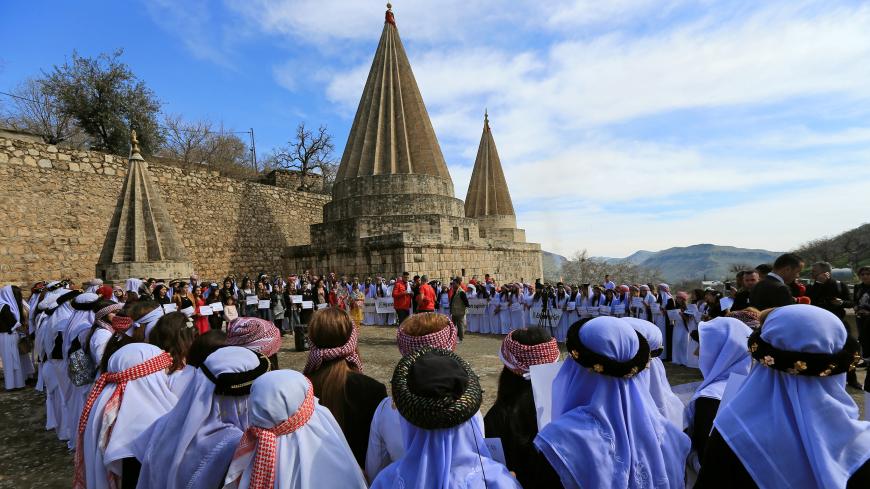 Yazidi women attend a ceremony at Lilash Temple to commemorate the death of women who were killed by Islamic State militants, during International Women's Day, Shikhan, Iraq, March 8, 2019. - REUTERS/Ari Jalal

SULAIMANIYAH, Iraq — Nearly five years after the Yazidi-majority town of Sinjar was recaptured from the Islamic State (IS), conflicts among opposing forces in the town hinder rehabilitation efforts and the return of internally displaced persons, and set the stage for a looming battle.

IS militants seized Sinjar, near Iraq’s northwestern border with Syria, in 2014. They targeted its Yazidi majority in a genocidal campaign of killing, rape, abduction and enslavement. In November 2015, the extremist group was expelled from Sinjar in an operation launched by many forces.

When IS attacked Sinjar, the Iraqi Kurdistan peshmerga forces withdrew from the town without a fight, leaving the Yazidis defenseless. The outlawed Kurdistan Workers Party (PKK), based in the Qandil Mountains, rushed to aid Sinjar's citizens.

Now Sinjar is administered by the Yazidis' Sinjar Resistance Units (YBS) — which some consider to be affiliated with the PKK — supposedly in coordination with the Iraqi army and police. But in a March 19 confrontation between the YBS and Iraqi army, two YBS fighters and one Iraqi army soldier were killed.

“We have the ability to protect security in Sinjar," Iraqi Defense Ministry spokesman Tahsin al-Khafaji told Al-Monitor. "We have direct contact with the people of Sinjar, their tribal leaders. We have reinforced our units, and I can say that now the situation is under the control of our forces."

However, Sinjar Mayor Mahma Khalil, who is from the Kurdistan Democratic Party (KDP) and now lives three hours away in Dahuk, told Al-Monitor “The YBS is an extension of PKK, whose struggle arena is not here. The YBS forces are preventing the return of refugees. They create obstacles for the NGOs, they obstruct the return of people to rebuild their town and they use violence and create instability."

He accused the YBS of "imposing special laws" on the people of Sinjar and even Iraqi police forces. He called for more Iraqi military forces to be deployed to impose law and expel "YBS alien forces" from the country.

Jeanine Hennis-Plasschaert, the UN special representative for the secretary-general in Iraq, visited Sinjar on May 3 and called on the federal government in Baghdad and the Kurdistan Regional Government (KRG) in Erbil to create a single administration in Sinjar. However, it seems Baghdad and Erbil have different views on how to deal with the issue.

He stressed that the people of Sinjar should have the power to choose their own local administration, far removed from YBS influence.

Regarding calls for YBS forces to be expelled from Sinjar, and which forces should remain in the town, Khafaji, the Iraqi Defense Ministry spokesman, said such matters are determined by Iraqi Prime Minister Adel Abdul Mahdi, who is the high commander of the armed forces.

Saed Hasan, YBS commander in Sinjar, told Al-Monitor, “We aren't paying attention to calls for the withdrawal of our forces from Sinjar, as the YBS was the force that protected Sinajr from IS and we are from the town. Therefore, both the Iraqi government and army have admitted to our sacrifices in the fight.”

He made clear that YBS forces formally take orders from the Iraqi government, which admits to their de facto presence in Sinjar, indicating they have good coordination with both Iraqi troops and the Popular Mobilization Units (PMU), dismissing the prospect of expulsion by the Iraqi government as “unrealistic” and “incompetent." He assumes Turkey has been pressuring the KDP to fight the YBS.

He accused the KDP of obstructing people's returns to their hometown. He said the YBS has no objections to Sinjar citizens electing their own administration democratically, and provincial elections are scheduled for Nov. 16. However, he noted that the presence of many roadside bombs and the lack of basic services prevent people from returning to their villages and casting their ballots.

Qasim Shesho commands the Protection Force of Ezidkhan (HPS), a Yazidi militia founded in 2014 in response to IS attacks on Yazidis. In 2017, HPS joined the Kurdistan region's peshmerga forces. Shesho told Al-Monitor, “Our view is that as long as the [PMU] and the PKK are located in Sinjar, the town cannot see security and stability. Joint forces from the Iraqi federal government and peshmerga should establish security and stability in Sinjar.”

The PKK announced its withdrawal from Sinjar in March 2018, after Turkey threatened military action there. Turkey, which considers the YBS an extension of the PKK, is thought to be fueling enmity among the area’s various ethnic groups and nations for its own benefit.

“The YBS is ideologically connected to the ideology of Abdullah Ocalan [the long-imprisoned founder of the PKK in Turkey], but the YBS is not a foreign force to the city, as the majority of the fighters are Yazidis. There is a fear of clashes between the forces, but it's not logical to call for the YBS to withdraw from the city,” Kamal Chomani, a nonresident independent fellow at the Washington-based Tahrir Institute, told Al-Monitor.

“The KDP considers the YBS an existential threat in Sinjar, and even beyond Sinjar borders, as the PKK can expand its military might through the YBS in the future," he said, adding that Turkey pressures the KDP to continuously call for the YBS to withdraw from the city.

Chomani emphasized that the people of Sinjar should elect a mayor from among themselves, supported by all, and the forces should reach a political agreement in which Baghdad should treat the YBS as a Yazidi brigade and the KDP should accept the new political and military balances in the city, as one can't expel the other from the Sinjar area because all the forces have Yazidi members.

On May 12, Dindar Zebari, KRG coordinator for international advocacy, said IS had kidnapped almost 6,300 Yazidis since invading Sinjar in 2014. As of May 4, 3,371 have been freed or rescued — almost all of them women and children. The whereabouts of the rest, including more than 2,700 men, are unknown.

“The Yazidis need to have a force [of their own] to protect them from any future threats," especially since extremist terrorist groups still pose a danger, Chomani concluded.

Turkey’s intention to launch a massive cross-border operation against the areas of northeast Syria still held by the Kurdish People's Protection Units (YPG) might be broadened to target Sinjar and the Qandil Mountains, two main places Turkey considers threats to its strategies in the region. But such a move might produce devastating outcomes for Turkey and the KRG, as Iraqi leaders frequently say Iraq’s soil will not become an arena for sorting out regional disputes.