The Islamic State's gruesome killing of a sheikh and some of his relatives by rigging his corpse with explosives has led to security concerns in the multiethnic region bordering Iran, long a hotbed for extremism and susceptible to sectarianism. 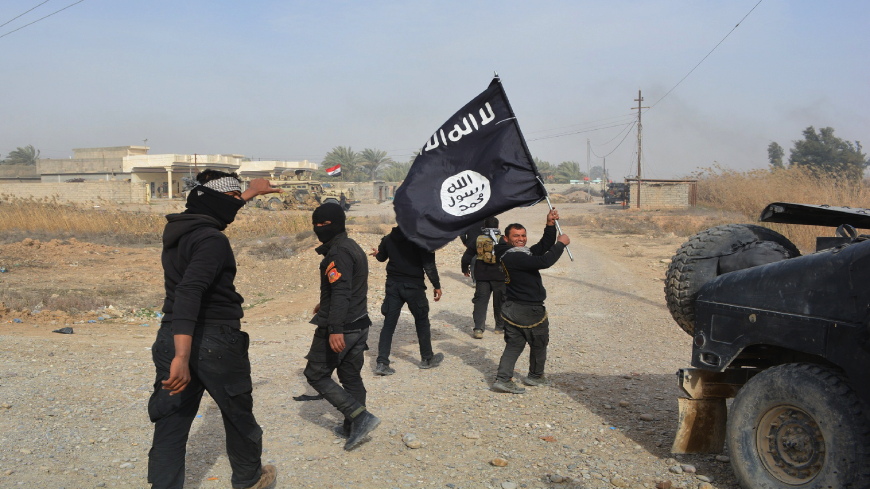 Iraqi government forces celebrate while holding an Islamic State (IS) group flag after they claimed they had gained complete control of the Diyala province, northeast of Baghdad, on Jan. 26, 2015, near the town of Muqdadiyah. Iraqi forces liberated Diyala province from the Islamic State jihadist group, retaking all populated areas of the eastern region. - YOUNIS AL-BAYATI/AFP via Getty Images

Another recent uptick in attacks attributed to the Islamic State (IS) in the long-problematic Diyala region northeast of Baghdad near the Iranian border has raised questions about security in the region, while many warn of worsening sectarian tension there and elsewhere.

A Shiite sheikh from the Bani Kaab tribe who was reportedly active in the fight against IS near Khailaniyah in the Muqdadiyah area of Diyala was killed on Oct. 27 along with four of his relatives. The sheikh was said to have been beheaded, while his body was rigged with explosives that then killed those who had come to retrieve him.

Initial reports had stated that a shepherd or buffalo herder had been kidnapped and killed but later it was discovered that the victim was the Bani Kaab tribal sheikh.

First deputy speaker of the Iraqi parliament Hassan Karim al-Kaabi, from the same tribe, issued a statement on the attack, mourning the tribal leader and calling him "one of the great sheikhs who fought terrorism."

IS later posted a photo of the “execution” in which three of its fighters are seen wearing scarves across their faces with guns pointed at the back of the head of a gagged, elderly man on a dusty, tree-flanked dirt road under the bright Iraqi sun.

Coming as it did shortly after eight Sunni youths were killed on Oct. 17, in a nearby province, their bodies found with their hands tied behind their backs, and four others disappeared — an incident that many have said is connected to Shiite Iran-linked armed groups — some see this as an attempt to stoke greater animosity between Iraq’s sects.

Though IS clearly claimed responsibility for the attack, some hint more or less explicitly at the possibility of other groups — including both Iran-linked armed groups and Kurdish ones — benefiting from or even having direct involvement in the incident for sectarian or other reasons.

Iraqi forces launched a ground and air operation to clear about a dozen villages in the area on Oct. 31, and on Nov. 2 the Interior Ministry announced that it had arrested two men in connection with the incident.

The spectacular nature of this attack garnered greater attention, but similarly violent incidents — many of which are subsequently claimed by IS — are reported on an almost daily basis in Diyala.

In the last 10 days of October alone, for example, IS reportedly attacked a village with mortars and snipers in the Jalawla subdistrict of the same region and claimed responsibility not only for the killing of the sheikh and his family members, but also for a mortar attack on Sunni tribal Popular Mobilization Units (PMU) in the Sherwan area. IS also claimed responsibility during that time period for the killing of four Iraqi intelligence agents and the wounding of two others near Muqdadiyah; the killing of three “Shiite militants” at a fake checkpoint set up east of Jalawla; the bombing of eight barracks and watchtowers operated by Iraqi SWAT teams in the Waqf area of the province; and a roadside bomb attack on a vehicle carrying Sunni tribal PMU fighters in the al-Wahda village in the outskirts of al-Azim.

There are conflicting reports about the details of several of these incidents. For example, local media stated that the three “Shiite militants” killed at a fake checkpoint were instead civilians and that others had been abducted.

A US military official noted to this reporter earlier this year that, in any case, IS claims of responsibility for attacks in Iraq and the number of people killed by them roughly match the coalition’s own findings and information gathered from multiple sources.

In response to questions on international coalition support for anti-IS operations in Diyala during the month of October sent to coalition spokesman Col. Wayne Marotto, Media Relations Officer Cpt. Jose F. Uriarte responded via email on Nov. 1, stating that “the support we provide from the air through intelligence, surveillance and reconnaissance, strike and other capabilities has been a key part of our efforts to enable the Iraqi Security Forces,” but that the Strike Summary for October 2020 was not yet available.

In September, however, the coalition “conducted seven strikes against Daesh targets consisting of 16 engagements” in Iraq, resulting in “18 enemies killed, six cache sites destroyed and four tunnels destroyed,” he said.

IS and other terrorist and insurgent groups have long exploited the thick orchards and other geographical characteristics of Diyala. For example, the Jordanian-born leader of al-Qaeda in Iraq at that time, Abu Musab al-Zarqawi, was killed in a 2006 airstrike when hiding east of the regional capital, Baqouba.

The surrounding area with Iran across the border to the east, the Hamrin mountains running from the Iranian border to the dividing line between the Salahuddin and Kirkuk regions to the west near Hawija and Garmiyan to the north also suffer from varying levels of instability and/or the presence of non-state actors.

Areas disputed between the central government and the Kurdistan Regional Government (KRG) suffer gaps in security due to disagreements between the two, though some improvement seems to have been made since Prime Minister Mustafa al-Kadhimi was sworn into office on May 7.

Worthy of note is that some of the recent IS members killed by Iraqi security forces and whose names have been announced were Kurdish, as evidenced by their nom de guerre, such as Abu Hassan al-Kurdi, who was killed in late October near Mandali, a town in Diyala on the border with Iran.

Kadhimi chose the Mandali border crossing for the launch of his anti-corruption efforts at border points across the country, which are notorious for the loss of customs revenue and have been accused of being open to various types of trafficking.

Mandali is just south of the Garmiyan, an area in the southeastern part of the Kurdistan Region of Iraq (KRI) administered by the KRG, but in the Diyala region under the central government.

A security official working in the disputed territories that Al-Monitor met in September in Garmiyan but who cannot be named, as he was not authorized to speak to the media noted that the history of the Kurdish jihadist group Ansar al-Islam affects the local area.

He said that, in the early 1990s, “because there were so many extremists inside the Islamic movement, they fought against the (Patriotic Union of Kurdistan) PUK in this area — from Kifri to Sulaimaniyah. Hundreds of Islamists were killed. A few hundred remained and went to the mountains — of course, with the support of the Iranian government. Even if they (Iran) are Shia and the others (Kurdish Islamists) are Sunni. Why? Because (the Kurdistan Democratic Party) KDP and PUK were calling for democracy and, as you know, the Iranian government does not want democracy.”

“We have the names” of Kurdish Islamist terrorists still in the Hamrin mountains, he said, noting that as concerns IS, “almost 200 Iraqi Kurds joined.”

According to officials at the Interior Ministry, he added, “About 130 were killed and 70 are still around." The security official said they have "no information about what happened to them.”

Provocative gestures by Shiite-led armed groups in the area have meanwhile long been blamed for sowing the seeds of more sectarian grievances in the area, especially around the Khanaqin and Jalawla areas.

When this journalist returned to report from Jalawla in early 2015 following its liberation from IS and after she had been on the frontlines with peshmerga forces in their attempts to retake the multiethnic city in September 2014, for example, a green Shiite banner raised atop the minaret of a Sunni mosque was pointed out in anger to her by some natives of the area.

Shiite-led PMU operating in the area have also been accused of preventing Sunni internally displaced persons from returning to their homes in some areas of the province.

Such grievances may be used by IS to foster instability in the area and detract from the brutality of their recent killings.