An Islamic State attack has triggered a crescendo of acts of violence against and displacement of Sunnis in Iraq’s Diyala province, which borders Iran and has long suffered the presence of cells operating in its dense orchards and parts of the Hamrin Mountains. 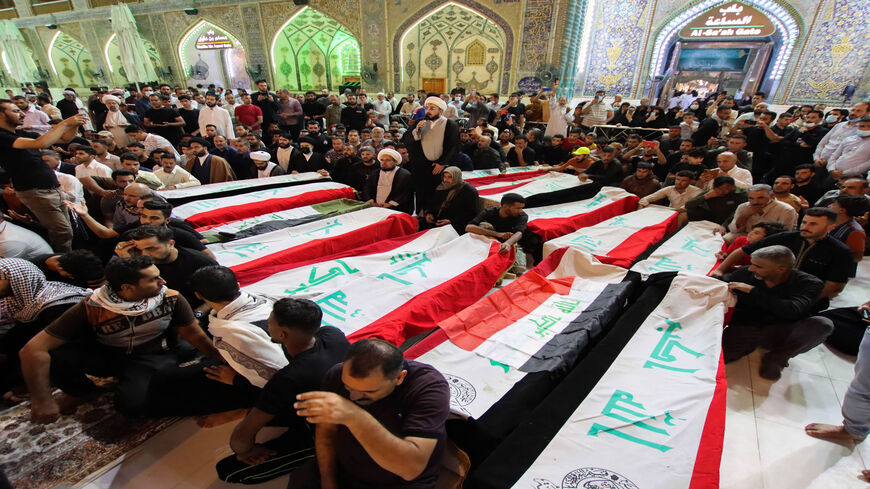 Mourners surround the caskets of victims of yesterday's attack on the village of al-Rashad in the eastern Diyala province that reportedly killed at least 11 people, during their funeral in the central shrine city of Najaf, Iraq, Oct. 27, 2021. - Ali Najafi/AFP via Getty Images

An Islamic State (IS) attack against members of a prominent Shiite-majority tribe in Iraq’s eastern region of Diyala in late October was followed by retaliatory violence against local Sunnis, sparking fears of a return to the years of massive sectarian bloodshed.

At least 11 people from the Bani Tamim tribe were killed Oct. 26 in the village of al-Rashad and over a dozen injured. Reportedly three (some reports state two) men were abducted and killed first, followed by more of their relatives after they had been called to collect the bodies.

Armed men subsequently attacked the nearby Sunni-majority village of Nahr al-Imam, reportedly killing people and burning and destroying homes and farms in an act of retaliation for assumed “collusion” by the entire local Sunni community with IS.

Both members of the tribe and men receiving government salaries as part of the Shiite-led Popular Mobilization Units (PMU) allegedly took part in the violence. Some media associated with Iran-backed groups that have brigades within the PMU reported calls for burning down the orchards in the area that the attackers are thought to have used to hide in.

Massive displacement of Sunnis followed, fostered by echoes of the terror that civilians from the same area had faced during the years of the battle against IS and frequent sectarian killings for years before that. Many on social media claimed large numbers of revenge killings and displacement of hundreds of families; precise numbers, however, were not immediately available.

Homes and orchards, which many local inhabitants rely on for their livelihoods, were burnt. It is unclear when — or whether — many of the Sunni inhabitants who fled to protect their lives and families will be able to return.

Concerns have long been voiced in several Sunni rural areas of Iraq — especially Tarmiya, some 50 kilometers (31 miles) north of Baghdad in the southern part of Salahuddin governorate — that burning down orchards will be a way to induce forced displacement with the excuse of “preventing terrorism” originating from these areas.

In early 2015, as the fight against IS raged across the country, this journalist interviewed several people in a camp for internally displaced persons in neighboring Kirkuk province who had fled their homes in Diyala’s al-Muqdadiyah, where the recent attacks occurred, during the fight against IS. Many recounted horrific stories of being targeted by sectarian militias at that time as well as by airstrikes.

The province of Diyala was never entirely taken by IS, but some areas were under their control.

One Sunni family from al-Muqdadiyah said they had been shelled by government forces and that some of their male relatives had been "disappeared" by Shiite militias.

Four of the children had been killed by Iraqi government airstrikes in the fall of 2014, the father told Al-Monitor, against alleged IS positions in the area. His three remaining sons had removed shirts and pulled up trousers in the tent that they were living in to show ragged scars, noting that shrapnel remained lodged inside their bodies and that they had no way to get proper medical treatment.

Diyala province, which stretches from the Iranian border to just north of the capital, Baghdad, is crossed by the Hamrin mountain chain, infamous for its longstanding use as a hideout for insurgent groups even before IS existed.

It was east of the provincial capital of the region, Baquba, that the Jordanian-born leader of al-Qaeda in Iraq at that time, Abu Musab al-Zarqawi, was killed in a 2006 airstrike.

IS fighters in Diyala, which borders Iran, have in recent years filmed themselves in parts of the province using Iranian weapons. A Diyala security officer told Al-Monitor in April 2020 that Iran-linked PMU had abandoned some of their positions in the province the previous month, allegedly due to concerns about being targeted by US drone strikes, and that weaponry left behind had then been taken by IS fighters.

One of the towns in Diyala long known as being troublesome and a flashpoint for sectarian tensions is Jalawla. This journalist reported from the frontline with peshmerga forces during the fight to retake Jalawla from IS in September 2014. Peshmerga forces won it back in late November 2014, but Iraq's central government forces took both Kirkuk and Jalawla away from the peshmerga in October 2017, after a referendum on independence of the Kurdistan Region of Iraq (KRI) that Baghdad had been opposed to.

Many in the area are still unhappy with the security forces in the area, while security officials have claimed that some tribes — such as the Karwi — still have many IS affiliates among them.

Kirkuk and Diyala have areas that are claimed by both the central government in Baghdad and the KRI. Tensions between the KRI and Baghdad over territory and other issues continue to result in security gaps and a lack of coordination susceptible to exploitation by insurgent groups.

In recent years, Diyala has been one of the Iraqi provinces with the highest number of attacks by IS cells and has seen attacks using similar methods to the most recent one.

As this journalist reported in October 2020, “A Shiite sheikh from the Bani Kaab tribe who was reportedly active in the fight against IS near Khailaniyah in the Muqdadiyah area of Diyala was killed” and “beheaded, while his body was rigged with explosives that then killed those who had come to retrieve him.”

The gruesome 2020 attack had occurred Oct. 27, almost exactly a year before this latest attack in the same area, and a similar tactic of killing those coming to help and/or recover bodies.

While security issues have been left to fester in the province and must be addressed, there are now also major concerns about sectarian killings.

Sunni Arabs in general across Iraq experienced major displacement during IS occupation of their provinces and the subsequent fight against the international terrorist group, victory against which in the country was declared by the Iraqi government in December 2017.

Many from areas previously under IS control have still not returned home almost four years later, or have no homes to return to. In some cases, such as Jurf al-Sakr (now renamed Jurf al-Nasr), they are not being allowed back into the area by Shiite armed forces that have claimed the area for themselves.

Incidents such as the latest one — which has deprived many of their lives, homes and livelihoods — could in addition be used for propaganda purposes by IS or others seeking to place collective blame on already suffering communities.