The Iraqi government is seeking to prevent both further attacks by the terrorist group and outbreaks of sectarian violence. 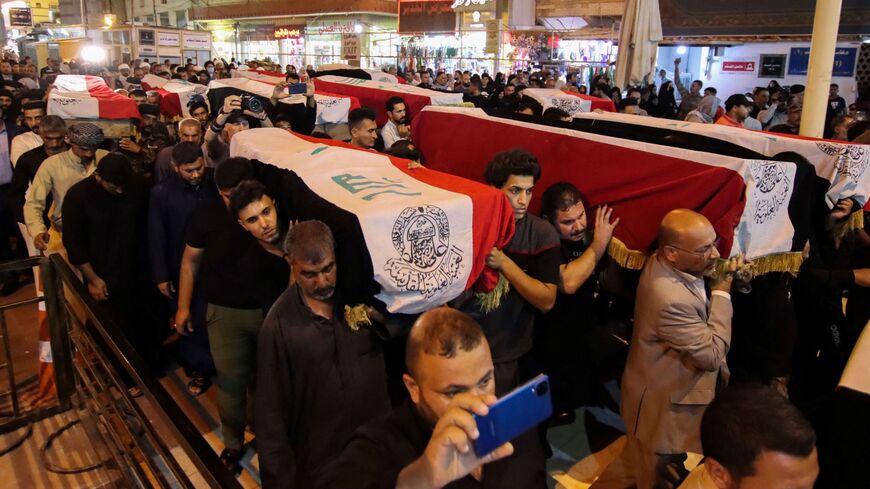 Mourners carry the caskets of victims of the attack on the village of Al-Rashad in Iraq's eastern Diyala province that reportedly killed 15 people, during their funeral on Oct. 27 in the central shrine city of Najaf. - ALI NAJAFI/AFP via Getty Images

BAGHDAD — A group of Islamic State militants carried out an attack in the village of al-Rashad in Diyala province early on Oct. 26, killing 15 people and wounding 30.

Prior to the attack, the IS militiamen had kidnapped two people from the predominantly Shiite village in eastern Iraq and demanded money for their release. However, the family of the hostages refused to pay, and the attackers opened fire on the village.

“We stand firm on our pledge that we will continue to chase terrorists inside and outside Iraq. The Muqdadiya crime will not go unpunished,” tweeted Iraqi Prime Minister Mustafa al-Kadhimi. “Their heinous crimes strengthen our determination to uproot them from Mesopotamia.”

A few hours after the Diyala incident, another group of IS militants attacked an Iraqi Army post in the Rashedia district of northern Baghdad.

IS operations have been on the rise recently. In addition to repeated attacks in Diyala, the terrorist group struck the Shiite district of Sadr City in eastern Baghdad in July, killing 30 people, and also attacked a checkpoint near the city of Kirkuk in September, killing 13 members of the federal police.

The attacks come despite the fact that Iraq has been actively arresting IS leaders over the last few months. The deputy leader of IS, the group's finance chief and many other prominent commanders are among those killed or arrested by the government.

After the Diyala attack, tribal men from the victims' families attacked the nearby Sunni village of Nahr Al-Imam, accusing them of betrayal and siding with IS.

According to security officials who spoke to Al-Monitor on condition of anonymity, approximately 3,000 fighters from the Bani Tamim tribe (from which the victims hail), supported by Popular Mobilization Units (PMU), surrounded the village of Nahr Al-Imam from all sides. They also destroyed and burned villagers' gardens and houses with bulldozers.

Many villagers escaped from the area and called on the government to protect them. Some were able to seek refuge in the mosques of Baquba, the capital city of Diyala, leaving all their belongings behind. This could lead the Sunni tribes to retaliate against Bani Tamim members and eventually to a tribal conflict within the Diyala province.

In order to prevent attacks from escalating into sectarian conflict, Iraqi prime minister sent a high delegation including the interior minister Othman al-Ghanemi, the migration and displaced minister Mrs. Ivan Faiek Jabru and the national security advisor Qasem al-Araji to the area on Oct 28 to stop further escalation.

The government also has sent special security forces to the area.

Operations spokesman Maj. Gen. Tahsin al-Khafaji informed Al-Monitor that in response to the recent attacks, the government has sent two anti-terrorism teams to Muqdadiya. He said the main motive of the IS attack was to cause turmoil in a district with a previous history of tribal and sectarian conflict.

“Operations will take place based on intelligence and informed decisions to identify and capture the terrorists involved and bring them to justice,” Khafaji said.

The leader of the PMU’s Badr Organization, Hadi al-Ameri, also travelled to the area to try to preserve security, but he was faced with anger and opposition from the tribal leaders. The Badr Organization is the main segment of the PMU forces located in Diyala.

The major reasons driving the increase in terrorist attacks in Diyala, according to the Sunni villagers, are the displacement and exodus of residents from nearby villages by PMU during the fight against IS. The evacuated villages are then used by the terrorists to launch their operations.

Muqdadiya, which has been a regular target of IS, is located in the Hamrin mountains, a refuge for IS cells, giving them access to the Iraqi central desert region that connects to Syria. According to the United Nations counter-terrorism chief, more than 10,000 fighters are still operating inside Iraq and Syria and travelling freely within the two countries.