Deadly protests in Iraq’s southern economic hub and its nearby key commodities port continue amid concern that actual casualty figures are higher than reported. Several protesters were killed Nov. 24 near the port. 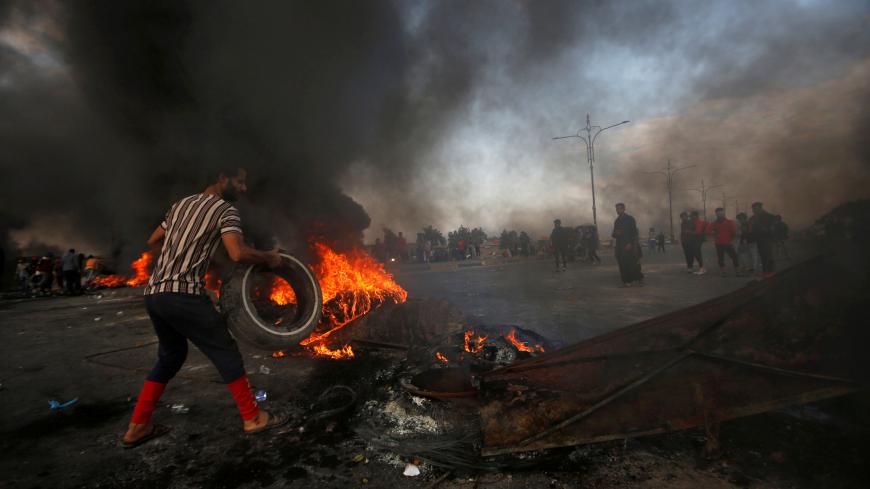 A protester places a tire in the fire during ongoing anti-government protests in Basra, Iraq, Nov. 24, 2019. - REUTERS/Essam al-Sudani

BASRA, Iraq — Repeated closures of Iraq’s key Umm Qasr port and intermittently blocked internet over the past almost two months have led to significant economic losses and suspicion in Iraq’s southernmost hub, as protests and outcry over the killing of unarmed demonstrators continue.

On Nov. 24, seven protesters were reported to have been killed and over 150 injured at the port when security forces apparently opened fire on demonstrators. Iraq’s High Commission for Human Rights reported only three deaths and said they had occurred during “violent clashes.”

During a visit by Al-Monitor to Basra in mid-November, a square outside the provincial government building was empty except for armored vehicles and police during the day. Many people had grown too afraid to take to the nearby streets “but some go out after 5 p.m. and try,” one local who did not want to be identified said.

Roads to the Umm Qasr port south of the city, which receives most of the country’s grain, vegetable oil and sugar imports, have repeatedly been blocked by protesters in an attempt to force concessions from a government they say refuses to listen to them.

The killings of several activists in Basra over the past year and what are generally perceived to be artificially deflated protester death counts hang heavily over any discussion of the current protests, which started Oct. 1.

The head of the Basra office of Iraq’s High Commission for Human Rights, Mahdi al-Tamimi, told Al-Monitor in an interview at his office Nov. 11 that the commission is independent in its decisions but receives government funding.

Unrest was particularly acute in the city last year, prior to the more recent protests in the capital and southern provinces. In 2018, protesters set fire to provincial government buildings and the headquarters of political parties and paramilitary groups, as well as the Iranian Consulate.

Several activists and lawyers have been slain in the city since then, including the high-profile activist and cartoonist Hussein Adel Madani and his wife, Sara Madani, in early October.

A Basra-based longstanding activist and lawyer, Hassan Serhan, told Al-Monitor in an interview in the city that the death toll is much higher than the figures officially released but that “no one knows exactly how many have been killed.”

He criticized Tamimi, saying the local human rights chief was the main reason behind the artificially low death toll.

Serhan said he is defending several activists who have been arrested. He told Al-Monitor on Nov. 22 that 125 detainees have been released of the 169 that had been arrested since Oct. 25, when the second wave of protests began after a pause for a Shiite religious ceremony last month.

He warned, however, that detainees are usually released only after a “sponsor” signs for them and that the cases have not been dropped. Protesters could thus be rearrested at any time and charged with terrorism.

Serhan said he paid dearly for his activism under Saddam Hussein’s regime. “My brother, wife and father were all executed” by the dictator, he told Al-Monitor; Serhan said he spent many years in exile.

Now he said he is afraid for his life as well. He frequently travels to reduce the risk of being targeted in Basra, where he feels most in danger. He said he had been involved in political activism since 2011.

“In 2003 I came back because I thought we were going to build a new Iraq, “ he said. “Unfortunately, I was disappointed because Iran got involved and created militias.”

Basra’s streets are lined with photos of “martyrs” of Shiite armed groups: On one street, photos of those belonging to Muqtada al-Sadr’s Saraya Salam, on another those of Kata’ib Sayyida Shuhada, Harakat Nujaba and others.

Many of these groups received funding or other support at some point from Iran. Some have since been incorporated into government forces after taking part in the fight against the Islamic State.

Thawra Helfi, a member of parliament from Basra, told Al-Monitor in an interview in Baghdad in early November that though she agrees with many of the protesters’ demands, young people now “expect a great deal more now than they used to” due to the internet and changing conditions.

As an example, she said, “Families in Basra didn’t have even a single air-conditioning unit before 2003 — and now even poor ones expect to have more than one.”

She added that corruption permeates all of Iraqi society and not only the government and claimed several generations will be needed to change this.

A common complaint of protesters is that almost none of Iraq’s oil wealth trickles down to them.

A Chatham House report published in early October says there are “tight-knit relationships between Iraqi security forces, local tribes and militias” in Basra and that this has led to “a more cohesive apparatus of repression” than in other areas of the country.

Tribal links in the Shiite south are stronger than the rest of the country, Helfi said, but this is because “tribalism is strong when the state is weak.”

Al-Monitor shared a taxi one night in mid-November from Basra to Karbala with two men who had been in the southern port city to attend their younger half-brother’s funeral.

The boy, 18, had died some days before from a head injury suffered during the protests, allegedly from live ammunition. The brothers had a large mounted photo of him, with a black slash across one corner signifying that he is dead, between them in the backseat.

The two noted that some of their relatives had fought in Syria with the Iran-backed and US-sanctioned Iraqi armed group Harakat Nujaba and that others had been killed fighting for their country and religion in battles against the Islamic State in the Makhoul mountains in northern Salahuddin province.

The driver, from another town in southern Iraq but who frequently plies the Basra-Karbala route, showed Al-Monitor a cellphone video of dozens of vehicles he claimed were transporting the corpses of 21 people killed on one day during the protests in Basra this month.

As flares in the nearby oil fields lit up the night sky, the driver sneered at the official death toll given by the government-linked human rights commission, calling it “a joke.”