Iraq on fire as protests spread across the south

Protests have escalated in Baghdad for the third day in a row, spreading toward southern Iraqi cities. 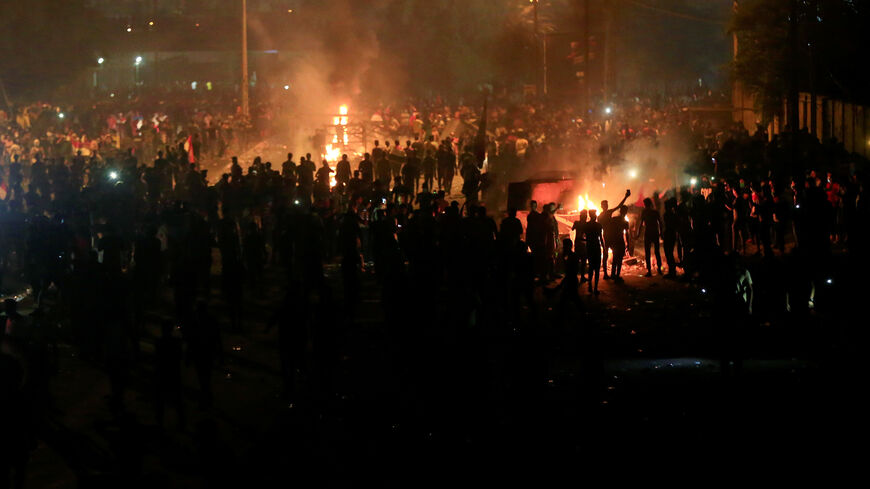 Demonstrators gather at a protest during a curfew, two days after the nationwide anti-government protests turned violent, in Baghdad, Iraq, Oct. 3, 2019. - REUTERS/Thaier Al-Sudani

Violent protests continued in Baghdad and other southern Iraqi cities for the third day in a row. After several were killed and hundreds were injured in the protests Oct. 1-2, Iraqi Prime Minister Adel Abdul Mahdi declared on Oct. 3 a curfew in Baghdad and three other cities in the south.

“All vehicles and individuals are totally forbidden to move in Baghdad as of 5 a.m. today, Thursday, and until further notice,” Abdul Mahdi said in a statement.

The US Embassy in Baghdad suspended routine consular services until the curfew is lifted.

In conjunction with Abdul Mahdi's announcement Oct. 4, that he will address the issues in a public speech, the internet returned at a very slow speed.

The new wave of protests that erupted early this week in Baghdad, in which protesters are demanding dignity, jobs and services, has spread to other southern cities including Basra, Najaf, Karbala, Diwaniyah and Nasiriyah. It has escalated quickly and now includes calls for the “fall of the regime.”

According to local police in the town of Rifae in southern Iraq, protesters carrying guns had fired at them on the morning of Oct. 3; dozens were injured, including five policemen.

Security forces have divided Baghdad into separate areas, trying to control each part separately. High smoke columns have been seen across the capital all day.

A group of angry protesters gathered in the road toward the international airport in Baghdad in order to shut the airport down but were dispersed by security forces who used tear gas and live bullets. The airport announced Oct. 3 there is no change in flight schedules.

Al-Monitor has learned from a security source who wishes to remain anonymous that the federal police and the army are being gradually replaced by Popular Mobilization Units (PMU). However, the PMU are wearing police and army uniforms in order to avoid raising negative sentiments against them.

Al-Monitor witnessed several drones across Baghdad. A different security source who also wished to remain anonymous told Al-Monitor the drones are being used by the PMU Intelligence Service to identify the protests’ leaders and organizers.

As anti-Iran slogans and burning Iranian flags spread among protesters, Iran closed two border crossing with Iraq Oct. 3. The Khosravi and Chazabeh border crossings are among the main border crossings used for Shiite pilgrims leaving Iran for the holy shrines of Shiite imams in Iraq.

The Imam Hussein holy shrine in Karbala is preparing to receive millions of Iranian pilgrims who are coming to Iraq for Arbaeen, which will be held in two weeks. Prior to the protests, several Iranian officials visited Iraq to coordinate and facilitate the movement of Iranian pilgrims. But in these circumstances, it is expected that the number of Iranian pilgrims decreased significantly.

Despite government measurements to control the protests, their promise to fulfill the protesters' demands and the imposition of a curfew, protests continue to escalate. On Oct. 3, a large number of protesters were able to break through barriers erected by security forces around Liberation Square and move toward the Green Zone.

No official reports on the rising number of deaths and injuries on Oct. 3 have been announced yet.

It is expected that Ayatollah Ali al-Sistani's spokesman will express the ayatollah's position regarding the ongoing protests during Friday prayer, on Oct. 4.

But it is very unlikely that Sistani's words will influence the protesters.

The majority of protesters are teenagers under the age of 20. They are not religiously conservative and therefore cannot be influenced by religious authorities. Rather, they are emotional, angry, looking for fast solutions, raising extreme demands such as changing the constitution, changing the parliamentary system to presidential and replacing Abdul Mahdi with dismissed counterterrorism head Abdul Wahab al-Saidi.

The crowds of young protesters seem to not have anything to lose. They move toward the security forces bravely, embracing live bullets, batons and tear gas. This makes them a dangerous force, ready to become extreme easily and quickly.

Although several figures — including Muqtada al-Sadr, who led protests for a long time — have tried to mediate between the protesters and the government in order to calm the streets, the protesters are not keen on any initiative leading them to evacuate the streets.

In such circumstances, the only thing that would calm the street is the resignation of the prime minister, which will become more realistic over time if the protests continue.