Iraqi youth to government: We’re not going to take it

As young Iraqis vent against their government, Iran is already positioning itself for the fallout, as its proxies hit the streets. 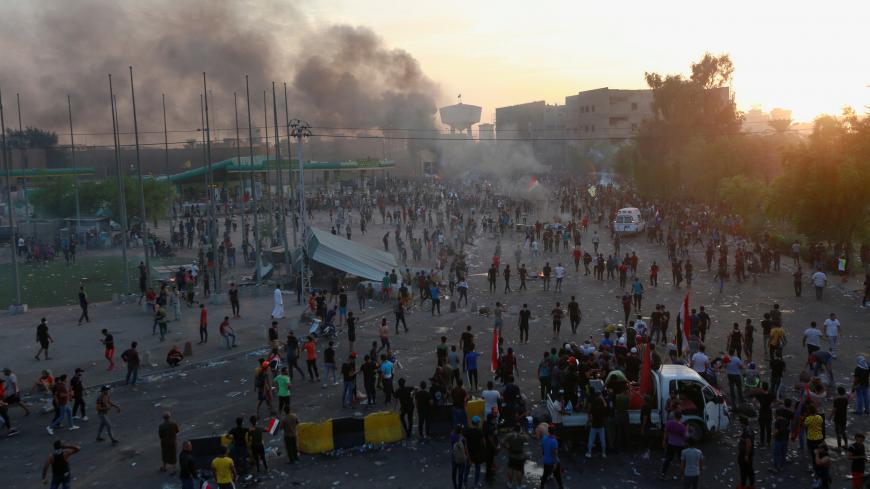 Demonstrators gather at a protest during a curfew, two days after the nationwide anti-government protests turned violent, in Baghdad, Iraq, Oct. 3, 2019. - REUTERS/Alaa al-Marjani

Iraqi Prime Minister Adel Abdul Mahdi is calling for a Cabinet reshuffle and support for parliamentary reforms to address protesters’ demands for jobs, services and an end to corruption. But another round of musical chairs among the usual suspects may not cut it this time. The protesters are even calling for an end to the “regime.”

To regain control, Iraq’s prime minister may need to press for even more dramatic reforms, with new faces, and break a bit more crockery along the way, if he is to hang on. That is not Abdul Mahdi’s style, of course, but these are desperate times. Protests in Baghdad and cities in southern Iraq so far show no signs of letting up. The government has imposed a curfew and shut down the internet and social media in parts of the country. As of this writing, 53 Iraqis have died with hundreds injured, including members of the security forces, over the past three days.

Iraqi youth, aged 15-24 years, make up about 20% of its population of over 39 million people. That means about 8 million and growing. While the official unemployment rate is 8%, the real number is higher, and even more so for youth and recent graduates.

It is this cohort that has taken to the streets, writes Ali Mamouri. The oldest among them were only 8 years old when Saddam Hussein was toppled. Their faith in what they consider to be the achingly familiar figures among the post-Saddam politicians is approaching zero.

In a prescient interview with Al-Monitor last week, Iraqi President Barham Salih stressed that Iraq’s leaders cannot be diverted from their “real mission” of providing jobs for Iraq’s unemployed graduates and youth. He said over 300,000 Iraqi graduates can’t find work. His address to the UN General Assembly focused on the need to battle corruption, which he described as the "political economy of conflict." These are not just Iraqi problems; they are endemic to the Middle East, which the Iraqi president called the “last broken region.”

“It simply cannot go on like this,” said Salih.

Iraq is 95% Muslim and 65% Shiite. We’re talking about over 24 million Iraqi Shiites who live predominantly in Baghdad and southern Iraq, where the protests are occurring. The most respected hawza, or Shiite religious seminaries, are located in Najaf, Iraq, and Qom, Iran, with lots of traffic back and forth by pilgrims, tourists and authorities. As southern Iraq suffered and many Shiites faced persecution under Saddam Hussein, religious authorities gained expansive political influence. Many of Iraq’s political leaders and parties are associated with religious parties.

But the demonstrations this week signal that religious authority among the youth may be waning. The protesters “are not religiously conservative and therefore cannot be influenced by religious authorities,” writes Mamouri. “Rather, they are emotional, angry, looking for fast solutions, raising extreme demands such as changing the constitution, changing the parliamentary system to presidential and replacing Abdul Mahdi with dismissed counterterrorism head Abdul Wahab al-Saadi.”

This means that Shiite clerical leaders, such as Grand Ayatollah Ali Sistani, the most respected religious authority in Iraq, and Muqtada al-Sadr, the populist cleric, are reacting to, rather than shaping, the present crisis. This is something new.

On Friday, Sistani urged protesters and security forces not to use violence, while aligning himself with the street, putting the blame and burden on the government. Abdul Mahdi had asked Sistani to advise the protesters to return home, Mamouri reports, but Sistani declined. “The government and political sides have not answered the demands of the people to fight corruption,” the cleric said in a statement. “Lawmakers hold the biggest responsibility for what is happening.”

Is Sadr losing the street?

Sadr is scrambling to regain his claim as the populist champion of reform, crusader against corruption and critic of US and Iranian influence in Iraqi affairs. On Friday he called for the government to resign and for new elections.

In 2018, when the government was formed, he was a kingmaker. His Sairoon coalition (Arabic acronym for “alliance for reforms”), which included an alliance with the secular communist party to appeal to Iraq’s secular, younger and intellectual set, won 54 seats in the last election, more than any other party.

Like Sistani, Sadr backs the protesters’ demands and, also like Sistani, he still commands a powerful following. But he, too, is repositioning, as his constituents may have questioned his weaving a bit more politics into his populist outsider approach.

The first reason is his association with the current Iraqi government. By no longer being in opposition, he indirectly became complicit in its actions, whatever independent stances and statements he might offer. The street is not in the business of compromise. People’s lives did not improve, and Sadr became indirectly associated with "more of the same" from Baghdad.

The second reason, related to the first, is Basra. In 2017, demonstrations against the lack of electricity and government services included an attack on the Iranian Consulate and provoked the US Consulate there to close shop. This past summer, Sadr counseled against demonstrations, but not because services were appreciably better. He was playing the political angles, and while these angles may have merit, they do not play as well with the base.

Finally, his trip to Iran last month would have been a downer for those who valued his independence from both Washington and Tehran. Of course, Sadr’s ties to Iran were never black and white. As we wrote four weeks ago, Sadr’s “family connections are deeply intertwined with Iran’s Islamic revolutionaries, and his relationships in Iran were never severed. He lived in Qom for years, and he knows how to navigate Iran’s clerical and political elites.”

While Sadr may have been positioning himself as a kind of broker between Baghdad and Tehran, and perhaps including a bid for Iran’s counsel to play the religious card in Najaf to cut into Sistani’s following, his being seated next to Iran’s Supreme Leader Ayatollah Ali Khamenei at Ashura, a religious ceremony, was not a great look among his newer, more secular followers.

Protesters and critics believe that Abdul Mahdi’s transfer of Saadi from head of counterterrorism to a position at the Ministry of Defense was done at Iran’s request, as Mustafa Saadoun reports. Whether it was or not, it occurred within days of the detention and torture of Iraqi diplomats by Iranian security services at the Iraqi Consulate in Mashhad, Iran.

Iran may be one of the targets of the protesters, but it is hardly out of the game. Sadr’s visit was a sign, as we explained, of Tehran’s concern about this emerging Iraqi nationalist trend. An Iranian Foreign Ministry statement expressed Iran’s "regret" at the demonstrations while expressing confidence that the Iraqi government will work with “all groups, parties and personalities,” especially "religious authorities."

Iran is already using its levers of influence in Iraq, including via its allied militias, which Abdul Mahdi has sought to curtail. “Al-Monitor has learned from a security source who wishes to remain anonymous that the federal police and the army are being gradually replaced by Popular Mobilization Units (PMU),” reports Mamouri. “However, the PMU are wearing police and army uniforms in order to avoid raising negative sentiments against them.”

Mamouri continues, “Al-Monitor witnessed several drones across Baghdad. A different security source who also wished to remain anonymous told Al-Monitor the drones are being used by the PMU Intelligence Service to identify the protests’ leaders and organizers.”

In addition to its PMU proxies and its good relations with the present Iraqi government, Iran will keep warm its contacts with longtime allies such as former Prime Minister Nouri al-Maliki, who, along with Ammar al-Hakim and others, have threatened to seek Abdul Mahdi’s removal, as Adnan Abu Zeed writes.

In other words, Iran will seek to assure that the path to stability in Iraq requires Iran’s buy-in and engagement.

US should stay the course on ‘Iraqi sovereignty’

The Trump administration’s best play for now may be to get behind an aggressive reform package by Abdul Mahdi to rein in the PMU and undercut corruption, while supporting the appointment of some fresh faces in any shake-up. Perhaps another position can be found to get Saadi back in the fold. Abdul Mahdi, in his remarks Friday, recognized the "legitimate demands" of the protesters, while describing the use of force as a "bitter pill" necessary to restore order. His counterparts in the three presidencies, Salih and parliamentary speaker Mohammed al-Halbusi, have also taken the mantle of reform and anti-corruption. They are stronger together for sure.

Iraqi national security adviser Falih al-Fayyad met this week in Washington with US Secretary of Defense Mark Esper and Chairman of the Joint Chiefs of Staff Gen. Mark Milley, in a sign that the administration is deeply engaged.

Whatever the United States does, it should do with a deft and subtle hand, and by following the lead of Iraq’s current leaders. That may not be the most dramatic or risk-free approach, given the calls of the street and the slow pace of reform. But the “Iraq sovereignty” approach is the best one that the United States can and should continue to emphasize.

As this all plays out, the rise in anti-Iran sentiment among the demonstrators should not necessarily be seen as a boost for US prestige, or that Iran is on the precipice in Baghdad. In Tehran, Iraq is considered a national security priority. Tehran is not leaving, and it has a high tolerance for "instability," even if its preference is stability in Baghdad. US policymakers can manage the present crisis by keeping in mind that Iraq is fragile, its leadership at times hangs by a thread (now more than ever), the Iranians have an inside track, the threat of the Islamic State remains, and the nationalist current in Iraq is almost certainly to play out against all foreign interference. The United States needs to be on the side of that nationalist current, or out of its way, rather than its target.