For Iraq’s youth, it’s been a failure. 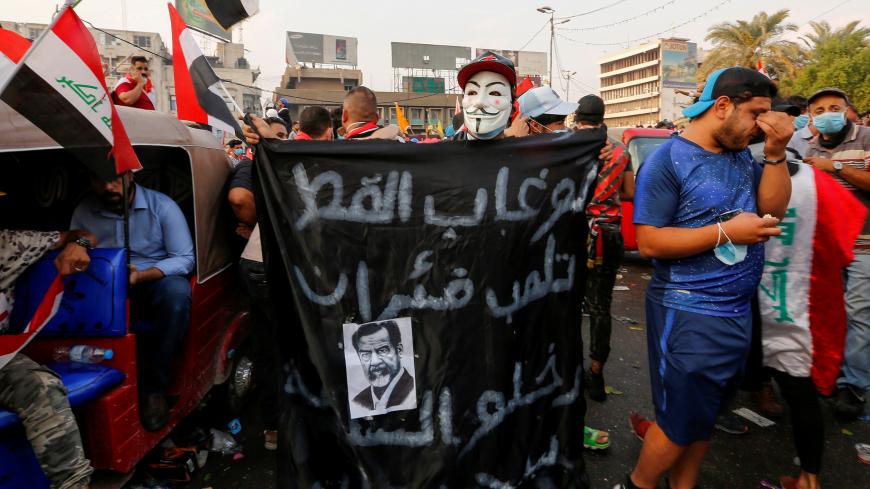 A demonstrator wears a mask and carries a sign with a picture of former Iraqi President Saddam Hussein during a protest over corruption, lack of jobs and poor services in Baghdad, Iraq, Oct. 29, 2019. - REUTERS/Wissm al-Okili

Not many would say freedom has reigned in post-Saddam Iraq. Iraq is now in its seventh week of popular uprisings calling for a change of government. Iraqi security forces have killed at least 350 people and wounded 15,000, with large numbers being abducted by unknown militias.

Now, 16 years after Saddam’s overthrow, freedom is getting a second wind thanks to Iraq’s youth.

The question is whether Iran, its agents of influence and Iraq’s calcified ruling class will allow Iraq to enter a new, post-sectarian era in which governance and nationalism trump identity politics.

Post-Saddam leaders don’t get a pass

Of Iraq’s 38 million people, 58% are under 24 years old. It is primarily Iraq’s youth who are driving the current protests. Approximately 30% are unemployed. The oldest in this cohort were only eight years old when Saddam was overthrown, and the rest have little or no memory of him and his rule.

For those who may not recall, Hussein was one of the world’s most brutal dictators. His "republic of fear" stood out even in a region where human rights have often been more aspiration than reality.

The organized anti-Saddam opposition included well-established Iraqi Kurdish, secular and religious parties, including some Shiite groups backed by Iran, such as Dawa and the Supreme Council for the Islamic Revolution in Iraq. These groups were the foundation of the post-Saddam ruling class. While the Kurds had the experience of self-rule from 1991-2003, the Shiites and other groups “could not adapt to change,” Falah Mustafa Bakir, senior foreign policy adviser to Iraqi Kurdistan Region President Nechirvan Barzani, told Al-Monitor. “They were in power but acting, behaving and planning like they were in the opposition.”

Let’s be clear: The transition in Iraq has been no cakewalk, as some Americans wrongly predicted at the time. The United States, expecting its forces to be greeted as liberators, did not plan for an extended post-conflict occupation, so it made up rules as it went. There were no democratic institutions in Iraq on which to build. The Iraqi experience since 2003 has included an insurgency against US occupation forces, a brutal sectarian civil war and by 2014, the rise of the Islamic State, which conquered Ramadi, Fallujah, Mosul, Tikrit and more than 56,000 square miles in northern Iraq with 4.5 million people. It was finally beaten back in 2017, but the threat remains in those mostly Sunni parts of northern Iraq, where grievances against the central government are still raw.

Iraq’s youths aren’t giving their rulers a pass on any of this because of their anti-Saddam bona fides or because of the tough times after liberation. They are instead holding them accountable for the civil war, poor services, endemic corruption and a heavy Iranian hand reaching into seemingly every corner of Iraq’s political, economic and cultural life.

They also can’t reconcile the maddening inability of the government to deliver basic services and electricity, especially to Basra, which sits on massive oil fields and should in an ideal world be more like Kuwait City than Kinshasa. Iraq exports close to four million barrels of oil per day. With those resources, how could the country be so lagging in services and experience negative growth in 2017 and 2018? This Iraqi generation can do the math, and the numbers don’t add up.

If Iraq’s leaders “had even 1% of these kids' energy, they could have fixed the whole country”

Iraq’s protesters are nationalists. They are calling out Iraq’s rulers on how self-dealing and identity politics have strangled the country’s potential.

They have taken over a major city landmark, Tahrir Square, and imbued it with its own social service network — a thumbing of the nose to the government’s miserable record. Demonstrators “have established a daily newspaper called Tuk-Tuk,” writes Ali Mamouri. “They repaired the streets, sidewalks and fountains. They're operating clinics and other public facilities and have set up public tents where scholars give lectures on the Iraqi Constitution and laws."

“If the successive Iraqi governments had even 1% of these kids' energy, they could have fixed the whole country,” a Western researcher and journalist who visited Tahrir recently told Al-Monitor.

Shelly Kittleson reports that the demonstrations are widespread in the south and that Nassirriyah has its own Tahrir Square. “The homes of several parliamentarians and politicians from the nearby town of Shatra have been set on fire, including the house of Hamid al-Ghezzi, the secretary-general of the Iraqi Council of Ministers.”

Sistani in, Sadr out

The new "Tahrir Square" nationalism is distinctly Iraqi and did not come out of the blue, Christine van der Toorn explains. And while the young may be in the lead, the diversity and inclusivity of the demonstrators is a trait shared with those calling for change in Lebanon and elsewhere in the region and beyond, including Hong Kong.

The protesters are secular, but also depend on the support of Grand Ayatollah Ali Sistani, Iraq’s most powerful Shiite religious leader, who is squarely behind the protesters. Some of the chants and songs employ religious symbolism. It may be more a sign of inclusivity rather than outright religiosity. The hawza, the Shiite religious institutions in Iraq, still matter. Sistani is the protesters’ institutional check on both the Iraqi government and the influence of Iran. As Iranian scholar Nasser Hadian told Al-Monitor, Iran can only press Sistani so much; eventually it has to follow his lead, like it or not.

Iraqi populist cleric Muqtada Al-Sadr tried to co-opt this secular trend by aligning with the Iraqi Communist Party, which is popular with students. Sadr, who until just a few years ago could mobilize the street in southern Iraq, is now on the sidelines. But his reputation as an independent agitator has been undercut by his on-and-off support for Prime Minister Adel Abdul Mahdi and his ties to Iran, Ali Mamouri reports. “The protests have largely silenced Sadr,” writes Renad Mansour in Foreign Affairs. “As the grassroots movement consumed much of Shiite Iraq, a politically weakened Sadr stayed in Iran.”

Iran's Supreme Leader Ayatollah Ali Khamenei said that the priority for the Iraqi and Lebanese governments is “to cure insecurity.” Tehran has been alarmed by the anti-Iranian bent of the protests, which included an attack on its consulate in Karbala, a pilgrimage destination for millions of Iranians. The Islamic Revolutionary Guard Corps' Quds Force commander Qasem Soleimani has been in Iraq often to coordinate responses to the protests and had to return to Iran to deal with anti-government protests there.

In order to delegitimize the demonstrators, Khamenei and his allies in Iraq are now warning of "foreign influences" — the United States, Israel and the UAE — behind them, and Iraqi officials have begun to refer to the protesters as “disrupters.”

“Local police, the Iraqi army and counterterrorism forces can be seen in great numbers almost everywhere in Baghdad,” Mamouri reports from Iraq. “But mask-wearing special forces are behind the majority of the violence against the protesters. The special forces seem to outrank the others, giving orders and sometimes pushing the other security units back and taking their positions.”

“It seems the government has been taken over by unnamed forces that all officials talk about but that no one dares name,” Mamouri continues. “For example, Iraqi Defense Minister Nijah al-Shimmery said Nov. 15, during his visit to France, that his forces had not received any order from him to target the protesters, and that a third party is targeting both the security forces and the protesters.”

“Iran's influence inside Iraq's security forces is broad and not limited to the Shiite factions of the Popular Mobilization Units (PMU),” adds Mamouri. “Apart from a few pro-Iranian factions such as the Badr Organization and the Khorasani Brigades, most of the PMU are distancing themselves from the situation, trying to avoid any clashes with the protesters. Many PMU members have expressed their support to the protesters and condemned using violence against them via videos shared over social media.”

For the United States, first do no harm

What is happening in Iraq is an Iraqi story. The United States, despite its influence, is mostly a bystander. But it can cajole Iraq’s leaders to avoid violence and undertake reforms.

Former US diplomat Edward Djerejian told Al-Monitor that he would advise US policy-makers to “do no harm” in Iraq. “Do not get directly involved,” he said. “Promote our values, but without any false hopes that we're going to be the instrument of change in any way in these countries.”

US Secretary of State Mike Pompeo seems to have struck the right balance so far. He has "deplored" the violence against protesters and reminded Iraqi leaders that “peaceful public demonstrations are a fundamental element of all democracies." Pompeo also threatened US sanctions on “corrupt individuals that are stealing Iraqis’ wealth and those killing and wounding peaceful protesters.”

The burden is on the Iraqi government as well as the protesters to urgently begin a reform program and avoid a state collapse and more violence. This includes reform of the electoral law, which has been championed from the start by Iraqi President Barham Salih and endorsed by Sistani. This week the United Nations called for further changes in pending Iraqi legislation to reform the law.

As we reported last month, “The default setting of an Iraqi government collapse is probably not stability and democracy. The neighbors and the region will have their say on the course of events, and not always for the better.” We learned all this in 2003. And Iran is best positioned today to exploit a breakdown scenario, as revealed by the leaked Iranian intelligence cables provided to The New York times and The Intercept.

The protests were at first leaderless, but they are shape-shifting into a movement with nascent structures, Christine McCaffray van Der Toorn and Raad Alkadiri explain. Protest leaders, they write, might be “able to establish a bridge to the few current Iraqi leaders who fully support change, and to work with them to find reform solutions.” As we previously noted, at the risk of a strained historical metaphor, “Nelson Mandela needed South African President F.W. de Klerk to undertake the reforms that ended white rule in South Africa."