The popular protests in Iraq are still spreading, putting the government into even more of a corner. 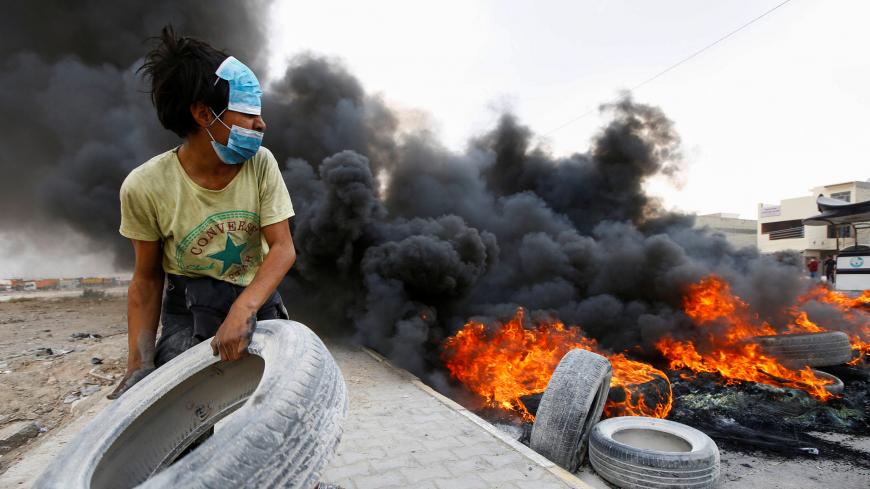 The protests are escalating rapidly in Iraq, with the players moving fast and adding more fuel to an already burning region. This increasingly complex conflict is not just reshaping the country's politics, but affecting the entire region.

Every day a new scandal against the government comes up, most recently surrounding documents revealed by The Intercept on Nov. 17 exposing Tehran's power in Iraq. Unidentified militias shell the Green Zone every now and then, most recently on Nov. 17, threatening the US and Iraqi governments if the governments take action against the militias. The Iranians and Americans are competing to shape Iraq's future and the protesters are pushing to turn the entire political system upside down.

So, who is fighting whom and how are they moving their chess pieces on the map of conflict?

The recently leaked documents on Iran’s powerful system and network in Iraq, obtained by The Intercept and shared with The New York Times, which used them in a Nov. 17 story, have shaken Iraq's political foundations, giving more energy and persistence to the protesters and exposing huge scandals that affect almost all Iraqi politicians.

The Iraqi political class seems helpless, isolated and incapable of dealing with the crisis that threatens to remove it from power. Several proposals have been made but none have been accepted, leading the protesters to escalate the movement further and increase their demands.

In the latest attempt, on Nov. 18, most of the parliamentary blocs — the Fatah Coalition affiliated with the Iran-backed factions in the Popular Mobilization Units, the Nasr coalition of former Prime Minister Haider al-Abadi, the Kurdistan Democratic Party and the Patriotic Union of Kurdistan, Ammar al-Hakim’s Hikma Movement and the two major Sunni coalitions, the Iraqi Forces Alliance led by parliament Speaker Mohammed al-Halbusi and the National Coalition led by Ayad Allawi — gathered in Hakim's house in Baghdad. They agreed on a proposal to undertake reforms within 40 days, including establishing a special court for corruption, changing the electoral law and electoral commission, reshuffling the Cabinet, prosecuting the forces who targeted the protesters and passing several pending proposals involving oil and gas, social security and other issues.

The Nasr Coalition and Hikma Movement warned that they will form an opposition bloc in the parliament and move to withdraw confidence in Prime Minister Adel Abdul Mahdi if he does not proceed with the reform proposal within 40 days.

There is almost nothing new in the proposal; Iraqi President Barham Salih and the prime minister have put forward similar plans but they have not been implemented.

A former US senior adviser to the Iraqi government who just visited Baghdad’s fortified Green Zone told Al-Monitor, “This place is almost finished. The leadership has no clue at all. It is like being in the Palace of Versailles on May 4, 1789," a reference to the last days of the French monarchy before the French Revolution. "Iraq's political class is utterly clueless and disconnected.”

In such an environment, the protesters' demands for regime change are loud indeed.

Several security forces are dealing with the protests. Local police, the Iraqi army and counterterrorism forces can be seen in great numbers almost everywhere in Baghdad. But mask-wearing special forces are behind the majority of the violence against the protesters. The special forces seem to outrank the others, giving orders and sometimes pushing the other security units back and taking their positions.

It seems the government has been taken over by unnamed forces that all officials talk about but that no one dares name. For example, Iraqi Defense Minister Nijah al-Shimmery said Nov. 15, during his visit to France, that his forces had not received any order from him to target the protesters, and that a third party is targeting both the security forces and the protesters.

Shimmery also said, “The tear gas used to disperse the protesters is not safe and has killed several protesters. We learned after an investigation that this tear gas was not imported by the Iraqi government."

Shimmery added that he would say no to any order from Qasem Soleimani, the commander of Iran's Quds Force.

Abdul Mahdi also accused a third party of attacking both the protesters and the security forces, but he did not name this grouping.

Iran's influence inside Iraq's security forces is broad and not limited to the Shiite factions of the Popular Mobilization Units (PMU). In one of the Intercept documents, the former head of military intelligence for the Iraqi army, Gen. Hatam Maqsusi, told an Iranian agent in 2015, “All of the Iraqi army’s intelligence — consider it yours. Tell me whatever you need and I will provide to you.”

Apart from a few pro-Iranian factions such as the Badr Organization and the Khorasani Brigades, most of the PMU are distancing themselves from the situation, trying to avoid any clashes with the protesters. Many PMU members have expressed their support to the protesters and condemned using violence against them via videos shared over social media.

The Shiite seminary of Najaf has been supporting the protesters' demands since the demonstrations began in early October. In addition to Grand Shiite Ayatollah Ali Sistani's weekly statement in support of the protesters, the clerics in Najaf and the staff of the Shiite shrines have been actively participating in the protests.

In his latest Friday sermon, on Nov. 15, the official representative of Sistani called for meeting the protesters' demands, emphasizing changing the entire political establishment via early elections and a new electoral law and condemning the government’s use of violence against the protesters.

Sistani has been escalating his discourse against the government, promoting the demonstrators' demands as the violence against the protesters has been on rise.

A senior cleric close to Sistani told Al-Monitor that he had told Abdul Mahdi prior to the Nov. 18 meeting, “Any drop of blood will be met with a major escalation against the government.”

Despite their differences in terms of age, gender, social class, tribe and location, the protesters are all gathered under one national umbrella, calling for a strong, united Iraq with a powerful and efficient government that does not allow outsiders to influence its policies.

Protesters are very active in Baghdad’s Tahrir Square, where they have established a daily newspaper called Tuk-Tuk. They repaired the streets, sidewalks and fountains. They're operating clinics and other public facilities and have set up public tents where scholars give lectures on the Iraqi Constitution and laws. “If the successive Iraqi governments had even 1% of these kids' energy, they could have fixed the whole country,” a Western researcher and journalist who visited Tahrir recently told Al-Monitor, asking to remain unidentified. Sistani's support for and influence among the protesters is visible everywhere in photos.

In conclusion, it seems that the protests have created powerful dynamics in Iraqi politics that are certain to change the future of Iraq. As Sistani said in his latest Friday sermon, “Iraq after the protests will not be the same.”