As Iraq approaches the constitutional deadline for selecting the new prime minister, chaos is spreading in the streets. 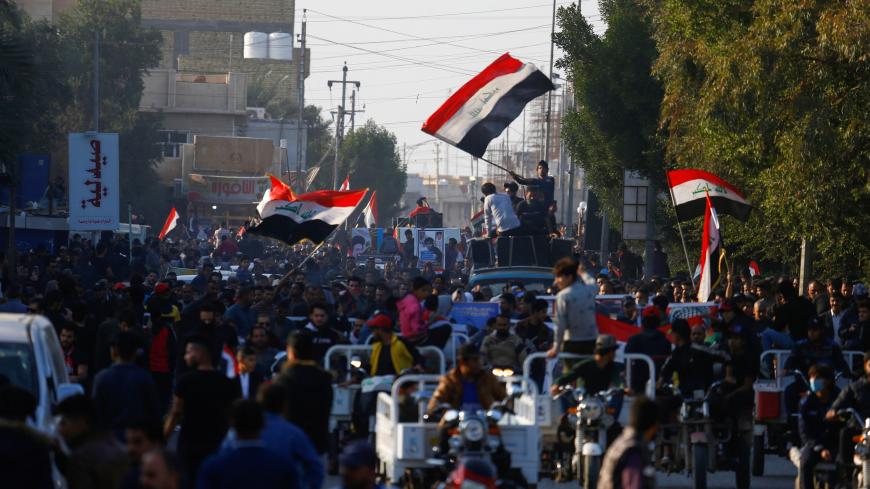 A number of unidentified militias penetrated Tahrir Square and the Sanak Bridge area in central Baghdad on the evening of Dec. 6, targeting protesters with live fire and carrying out field executions of some demonstrators. Dozens have been reported killed and many more wounded. Clashes are still ongoing.

One of the protest coordinators told Al-Monitor from Sanak Bridge via phone, "A massacre is taking place here. We have been able to capture a few of the attackers. We found IDs with the name and logo of Kataib Hezbollah in their pockets."

Abdul Mahdi Karbali, the representative of Iraq’s top Shiite cleric, Ayatollah Ali al-Sistani, called upon the Iraqi parliament Dec. 6 to choose the new prime minister without foreign interference and within the constitutional deadline, which is 15 days after the prime minister's resignation.

Al-Monitor learned from top Iraqi security officials that the commander of the Iranian Quds Force, Qasem Soleimani, is leading a security committee in Baghdad working on new tactics to end the protests and form a new government as soon as possible.

US Secretary of Treasury Steven Mnuchin expressed Dec. 6 his concerns about Iran's role in suppressing the protests. “Iran’s attempts to suppress the legitimate demands of the Iraqi people for reform of their government through the slaughter of peaceful demonstrators is appalling," Mnuchin said in a statement.

The former prime minister resigned a week ago, but no replacement has yet been nominated, creating a power and security vacuum in the country that is being exploited by different political and religious groups. During today's Friday sermon, Sistani called for the appointment of a new prime minister and called upon the protesters to avoid violence and isolate violent groups.

Hundreds of people marched Dec. 5 toward Tahrir Square in Baghdad, where protesters have been gathered since early October. They have been carrying Sistani's photos and chanting slogans in support of Sistani and criticizing the protesters for spreading chaos and violence.

Prior to the protests, several political and militia groups close to Iran called on their followers to attend the Thursday march to derail the protests. Carrying Sistani's photos is a strategy commonly used by pro-Iran groups to exploit his social influence to paint the protesters as anti-religion.

As soon as the pro-Iran groups reached Tahrir Square, a clash occurred between the two sides involving knives and other small weapons. Al-Monitor learned from several of the protest organizers that the attackers belonged to Kataib Hezbollah, a prominent pro-Iran faction of the Popular Mobilization Units (PMU).

In his Friday sermon, Sistani's representative railed against using Sistani's photos and name for political ends.

Counterprotests took place in Nasiriyah early this week as well. These marchers also held Sistani's photos, expressing their support for him against "the vandalizers."

In the Shiite holy city of Najaf, unidentified groups attacked clerics and religious pilgrims. They surrounded the shrine of prominent Shiite cleric Mohammad Baqir al-Hakim, setting fire to the building.

Hakim was one of the founders of the Islamic Supreme Council of Iraq. He led the council for more than 20 years during the Iran-Iraq War and the fall of the Baath regime in 2003. He was killed in a terrorist bombing in the holy shrine of Imam Ali in 2003.

The attackers brandished weapons and chanted against the religious establishment.

During the incident, the clerics gathered in the old city, where Sistani's residence and the Imam Ali shrine are located. The area is protected by a PMU faction called Al-Abbas.

The Hakim family in Najaf is one of the most prominent religious and political families in the city. Ayatollah Muhamad Said al-Hakim is one of four religious authorities from the family. The head of the Hikma bloc, Ammar al-Hakim, is another prominent figure in the family.

Al-Monitor learned from a source with ties to Muhammad Said's office that during the attack against Mohammad Baqir al-Hakim, the office contacted the Iraqi caretaker prime minister and the Iranian Quds Force commander Soleimani, who has been in Baghdad since Adel Abdul Mahdi's resignation, for help to disperse the attackers. The request was declined and they were told that the situation is out of control and the government did not want to get involved.

Finally, Najaf tribal leaders and the protest organizers coordinated with the local Najaf police to surround the shrine and push back the attackers.

A source in the Najaf local police told Al-Monitor on condition of anonymity that interrogations with the arrestees indicate that the attackers belong to Shiite religious sects like Yamani, Sarkhi and Mowlayia, who oppose the religious authorities and see them as a part of the religious-political corruption in the country. Some of them even call for assassinating Sistani.

This all comes amid rising concerns over Iran expanding its military presence in Iraq. The Pentagon has tracked the number of Iranian short-range ballistic missiles moving into Iraq in recent weeks.

It seems Washington is trying to support the anti-Iranian direction taken by many Iraqi protesters via releasing such information.

In the same context, the US Treasury announced sanctions Dec. 6 on three prominent PMU leaders close to Iran, accusing them of having a role in suppressing the protests during the last two months. Qais al-Khazali, leader of Asaib Ahl al-Haq, and his brother Laith al-Khazali, another leader of the group, along with Hussein Falih al-Lami, security chief for the PMU, have been sanctioned.

The new sanctions also include prominent Sunni leader Khamis al-Kanjar "for having materially assisted, sponsored, or provided financial, material, or technological support for, or goods or services to or in support of, corruption, including the misappropriation of state assets, the expropriation of private assets for personal gain, corruption related to government contracts or the extraction of natural resources, or bribery."

Khanjar has become a close ally to the pro-Iran Fatah coalition, led by the Badr Organization's Hadi Amiri after last year elections.

“Peaceful public dissent and protest are fundamental elements of all democracies. The United States stands with the Iraqi people in their efforts to root out corruption. We will hold accountable the perpetrators of human rights abuse and corruption in Iraq,” Mnuchin said.

In such circumstances, if the political parties fail to appoint a new prime minister accepted by the protesters and before the constitutional deadline and move forward with reform plans, the security situation will deteriorate significantly and chaos will spread throughout the country.