Protesters attacked the Iranian consulates in the Iraqi holy cities of Najaf and Karbala over the past month, yet officials deny that protesters are anti-Iran. 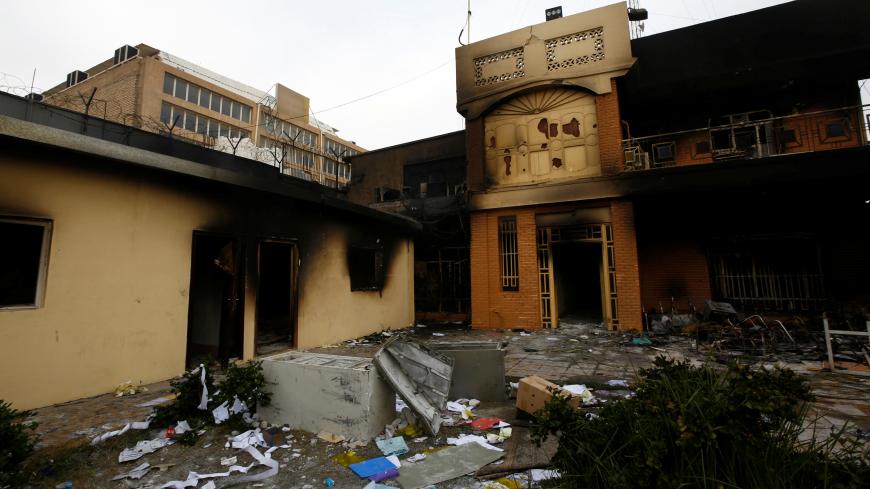 A view of the Iranian Consulate after Iraqi demonstrators stormed and set fire to the building during ongoing anti-government protests, Najaf, Iraq, Nov. 28, 2019. - REUTERS/Alaa al-Marjani

KARBALA, Iraq — Protesters have reportedly attempted to burn down the Iranian consulates in both of Iraq's holy cities, Najaf and Karbala, over the past month, with the consulate in Najaf torched twice in a single week.

Protesters in Najaf also attacked the shrine of late Ayatollah Mohammed Baqir al-Hakim, who was assassinated in 2003 after he returned to Iraq following two decades in Iran.

On Nov. 3, protesters attempted to burn down Karbala’s Iranian Consulate after a similar incident in Basra late last year.

Meanwhile, officials in Karbala claimed that most of those killed during protests were members of security forces. They denied knowledge of local “martyrs” among peaceful protesters or anti-Iran sentiment.

Allegations of mass killings of protesters in the city circulated widely among residents and on social media in previous weeks. Major media outlets reported at least 18 killed on Oct. 29 alone.

The cities of Karbala and Najaf are sacred to Shiite Muslims, and the reports sparked outcry among the mainly Shiite protesters in other parts of the country.

In interviews with Al-Monitor in mid-November, Karbala's police media chief and the deputy security chief for Karbala’s shrines painted a picture of violent infiltrators. Both said that claims of anti-Iran sentiment among those “peacefully demanding their rights” were attempts to exploit the situation by "those with an agenda."

Qassim Musleh, the deputy head of security at the Karbala shrines, said "Israel and America" were trying to create divisions among the Shiite community in Iraq.

Protests in central and southern Iraq began Oct. 1 and over 400 have reportedly been killed. Reliable figures are hard to get, and casualty counts are likely underestimated.

Musleh is also the head of the Shiite-led Popular Mobilization Units (PMU) for Anbar province, meaning he holds both a governmental position and one within the religious establishment.

The vulnerability of the holy city of Karbala, Musleh told Al-Monitor in 2018, is why the local Sunni population of Jurf al-Sakr in nearby Babil province would “never be allowed to return.” Jurf al-Sakr is currently under the control of Iran-linked Kataib Hezbollah. The PMU retook Jurf al-Sakr — now Jurf al-Nasr — from the Islamic State in 2014. Many say Kataib Hezbollah use the security of Karbala as a justification for the forces' continued occupation of the town.

​Musleh said in mid-November, “We support the demands of the protesters who are against corrupt parties.”

On the first night of the protests, he said, “there were 105 members of the security forces that were injured and not a single protester,” but some nights later, “rioters tried to destroy the government building and the Bank of Agriculture.”

“This violence is rejected by both sides: the security forces and the protesters," he said, "The Marjaiya [or senior Shiite clergy] say that violence is forbidden, and we take orders instructions from them.”

Musleh added that, in his role at the shrines, he and others had helped the peaceful protesters.

“We saw that toilets were needed and so we sent mobile toilets," he said. "Then we started providing three meals a day. We responded to the Marjaiya’s call to support the people who want to fix the government.” He said that thousands of employees of both Imam Hussein and Imam Abbas shrines had taken part in the protests.

Musleh said, “The PMU are providing security and protecting the border, but they are not officially taking part as PMU. If they are on leave, they have the freedom to do so. But we are part of the security forces and we cannot leave our positions to protest.”

“Hundreds are in the streets,” he added. “It is difficult for the police to understand who is peaceful and who is not.”

The road to the main protest square is blocked by concrete barriers. Vehicle traffic has been barred from the area, and a wide and empty road branches off the roundabout.

In late afternoon, police presence in the city is reinforced by black armored vehicles that arrive in waves. Security forces then prepare for possible attempts to reach government buildings. Yet the buildings “are empty now after the government’s decision to stop their work,” Col. Ali Abbas al-Ghanimi, the police media relations chief, told Al-Monitor.

Problems, Ghanimi said, don’t begin until after 8 or 9 p.m. The protests “started peacefully, but then rioters from outside the province came and started using bricks and stones to cause destruction and tried to burn” government buildings, schools and banks.

Ghanimi claimed that “10 security officers had been injured” for every protester.​ He said that in the main protest square, "you will not see" protesters chanting against Iran.

Shops were shuttered on streets adjacent to the concrete barriers that separated protesters and security forces. A young man who said he had been detained by security forces for several days, allegedly for filming the protests, interrupted his conversation with Al-Monitor to ask a street coffee seller if the two men walking by were “mukhabarat,” or intelligence officers.

On the side of the concrete barriers opposite the security forces, reached by taking a two-minute detour, a festive atmosphere reigned. Tents were set up and young people socialized, took selfies, danced and argued amid book stalls and free food.

In the center of the main square, photos of “martyrs” were displayed as well as banners, including one calling for “countries that support peace, freedom and democracy to stop Iran and expose its actions before the international community.”

A protester said there used to be more banners complaining of Iranian interference in Iraqi affairs in this square, “but one night someone came and took them down.”

Less than two weeks later, the Iranian Consulate in Najaf was under attack.