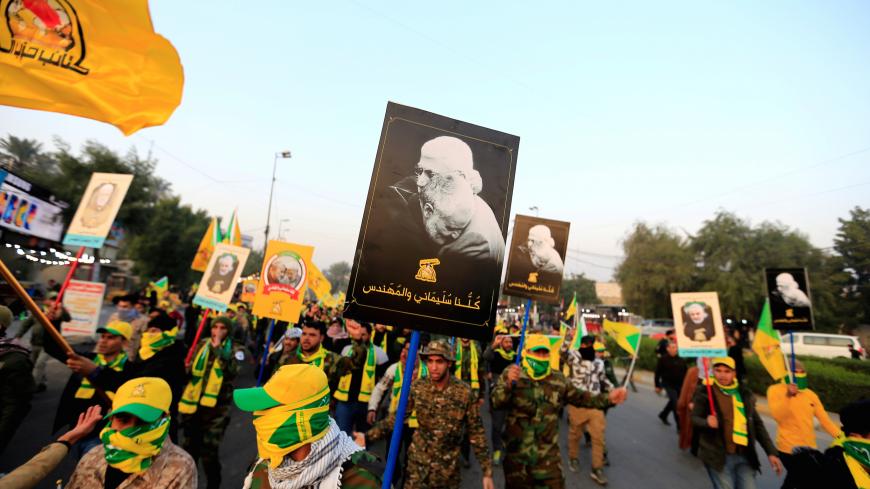 Members of the Iraqi militia Kataib Hezbollah gather in Baghdad on Jan. 4, 2020, ahead of the funeral procession of militia commander Abu Mahdi al-Muhandis, who was killed in a Jan. 3 airstrike at the Baghdad airport along with Iranian Maj. Gen. Qasem Soleimani. - REUTERS/Thaier al-Sudani

BAGHDAD — Iraq's parliament passed a resolution Jan. 5 calling on the government to expel US troops from the country, a day after a funeral procession for Iranian Maj. Gen. Qasem Soleimani and Kataib Hezbollah chief Abu Mahdi al-Muhandis took place in the capital and other Iraqi cities.

The resolution seems unlikely to actually end the US troop presence in Iraq, however, US Secretary State Mike Pompeo responded: "We're confident the Iraqi people want the United States to continue to be there."

Several explosions were heard in the capital late that evening, with reports of rockets hitting the Green Zone and another area.

A Jan. 3 US drone attack widely held to be a violation of Iraqi sovereignty killed Muhandis and Soleimani, the Islamic Revolutionary Guard Corps' Quds Force commander, as they were leaving the Baghdad airport.

Thousands attended the funeral procession. Young men in fatigues piled into small dusty white buses yelling religious slogans. The caskets were later paraded through Iraqi cities revered by Shiites, Karbala and Najaf, prior to their planned burial: one in Najaf and one across the border in Iran some days later.

A statement from the political office of Kataib Hezbollah, a US-designated terrorist organization led by Muhandis (who was also known as Jamal Jaafar al-Ibrahimi), had warned that members of parliament who not attending the Jan. 5 parliamentary session would be considered traitors.

Muhandis was also the deputy chief of the government-incorporated Popular Mobilization Units (PMU). Sections of many longstanding Iran-linked Shiite militias became part of the PMU in 2014 during the fight against the Islamic State (IS).

A Kataib Hezbollah security official made a statement on Twitter the night of Jan. 3 calling for "opening the door to registration for those who love martyrdom, to carry out martyrdom operations against the foreign crusaders."

Dec. 29 US airstrikes on Kataib Hezbollah positions in Iraq and Syria that killed at least 25 had been followed by an attack by militia supporters on the US Embassy on two days later.

Hadi al-Amiri, the longstanding leader of the Badr Brigades and head of a major political party, was seen with his hands placed firmly on Muhandis’ casket, vowing to make the United States pay.

Asaib Ahl al-Haq militia leader Qais al-Khazali, who was officially designated a terrorist by the United States on Jan. 3, did not publicly appear until late Jan. 4, blending in by wearing fatigues in the Najaf procession. His videotaped slapping of his neck was interpreted as a vow to get revenge for Soleimani and Muhandis' deaths even at the cost of his own life.

The two dead commanders were objects of intense hatred by some and lionized by others. They had long been considered key players in regional conflicts that have killed hundreds of thousands of people.

In Jan. 3 WhatsApp conversation, Kataib Hezbollah spokesman Mohamed Mohi told Al-Monitor that the militia should be recognized for its role in fighting terrorism, saying it had been “the first to fight IS, securing strategic areas around Baghdad” and liberating Jurf al-Sakr, a Sunni city in Babil province. The city's original residents are still prevented from returning there.

The streets used for the Baghdad procession have for years been linked with "martyr" photos of men in full military gear, framed by insignia of various Iran-linked PMU militias.

In Tahrir Square, “martyr'' posters instead often show the bloodied corpses of the more than 500 killed, mostly protesters, since anti-government demonstrations began Oct. 1. Many blame these killings on groups linked to the two commanders killed Jan. 3.

A 22-year-old Harakat Hezbollah al-Nujaba fighter from Nasiriyah taking part in Saturday’s procession told Al-Monitor he had fought alongside "Haji Qasem" on the outskirts of Aleppo, Syria, from 2012, when IS did not yet exist but local opposition groups were gaining strength.

The fighter, who would have been around 15 years old in 2012, called Soleimani and Muhandis “heroes” and “leaders of the Shiite.” The fighters from his group are now all part of official Iraqi government forces and get a government salary, he said.

In the procession, they wore uniforms with official PMU insignia but also carried large flags of their pre-existing militia organizations.

Though brigade numbers are now officially used for the PMU instead of referring to, say, Kataib Hezbollah or Asaib Ahl al-Haq, this often seems an attempt to disguise longstanding loyalties and links.

Off the main thoroughfare used by the mourners and militiamen is a stately home owned by Shibl al-Zaidi, the Kataib al-Imam Ali commander who was falsely said to have been killed in an alleged strike near Taji late Jan. 3. Later reports suggested he was actually in Lebanon.

This reporter interviewed Kataib al-Imam Ali fighters twice last year in the strategic western Iraq border city of Qaim, where the more recent strikes on Kataib Hezbollah positions killed at least 25. During the interviews, the Kataib al-Imam Ali commander for the area railed against US and Israeli “interference in the country.”

Panic momentarily spread late Jan. 2, shortly before the 1:45 a.m. attack that killed the two leaders, after rumors arose that Kataib Hezbollah supporters were planning to attack the anti-government protesters camping out in Tahrir Square.

Kataib Hezbollah fighters and supporters had earlier that day withdrawn from near the US Embassy and had then set up camp across the river near the Babylon hotel, used by many foreign businesspeople and for international conferences. This was close to bridges occupied by the protesters downriver.

Attacks, posturing, false alarms and false information have made these days a nerve-grinding experience for Iraqis.

During the evening of Jan. 4, mortar shells were fired at the Green Zone and the Balad air base.

On the sidelines of the procession, some older men asked to speak with Al-Monitor and stressed repeatedly that ''Iraqis want peace'' and that ''they do not want to be hurt by a war between the US and Iran."

They said they did not know anyone involved from the armed factions but one noted that “most of the fighters are young impoverished men from the south.”

But Safaa, a gray-haired man who did not want his last name used, said, “The US Embassy is not actually an embassy.” The man, who said he had lived in Germany for years but comes back regularly, said of the US complex, “It is an enormous cove of spies.”