Iraqi government arrests suspects after rockets aimed at US Embassy

As the one-year anniversary of the killing of Iranian general Qasem Solaimani approaches, several rockets have again been shot at the US Embassy in Baghdad; suspects have been arrested. 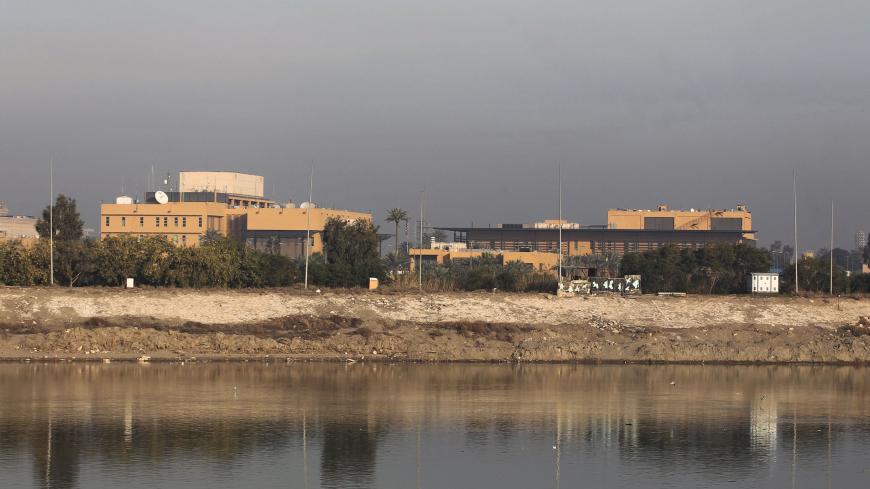 A general view shows the US Embassy across the Tigris River in Iraq's capital, Baghdad, on Jan. 3, 2020. - AHMAD AL-RUBAYE/AFP via Getty Images

A barrage of rockets shot at the US Embassy in Baghdad on Dec. 20 has once again raised questions and tensions, drawing criticism even from several prominent Iraqi armed groups linked to Iran.

A Dec. 23 US Central Command Statement claimed that 21 rockets had been shot, noting that: "The Dec. 20, 2020 rocket attack on the green zone in Iraq was almost certainly conducted by an Iranian-backed Rogue Militia Group" and "These groups are Iranian-backed because Iran provides both material support and direction. They are rogue because they are actually acting on behalf of Iranian interests and direction in a direct betrayal of Iraqi sovereignty".

The attack caused material damage to residential buildings nearby and injured at least one Iraqi security official but did not harm any foreign nationals. Allegations of more casualties among Iraqi civilians could not be verified but previous such attacks in the recent past have killed Iraqi civilians.

An Iraqi military statement said an “outlaw” group had conducted the attack, in which eight rockets were fired at Baghdad’s heavily fortified Green Zone, where the US Embassy is located.

In a press conference held the evening of Dec. 21 after the approval of the 2021 budget, Prime Minister Mustafa al-Kadhimi said the “rockets that fell yesterday hit civilians and private property, and they aimed to create a kind of chaos.”

Kadhimi noted in his press conference, according to a statement released shortly afterward by his media office, that the attacks “are criminal and cowardly, affecting the name and prestige of Iraq, and they are rejected by the people, the authority, and all reasonable people.” He said, "The state is the one that decides the decision on peace and war,” not militant groups.

He said that Iraqi security forces had made arrests overnight and had seized several other rockets and launchers, thereby thwarting “a second operation that was being prepared.”

Iraqi interior ministry forces arrested a militiaman from Asa'ib Ahl al-Haq for allegedly being involved in the attack. A group of the militia marched in the streets on Dec. 25 to force the government to release him but Kadhimi refused to give in.

In a tweet, Kadhimi said that his government had worked to restore confidence in the state and vowed that it was “ready for a decisive confrontation if necessary”.

The projectiles were shot down by a counter rocket, artillery and mortar system, or C-RAM, as evinced by the spectacle of red flares shooting through the Baghdad night sky.

The system was installed earlier this year amid stepped-up attacks on facilities hosting international coalition troops and the US Embassy following tensions that peaked in the final days of 2019 and after the Jan. 3 US assassination of top Iranian general Qasem Solaimani and the Iran-linked Iraqi militia figure Abu Mahdi al-Muhandis. Muhandis was seen as a hero by many Iraqis and as a terrorist by others.

Both men were on the list of US-designated terrorists, as are several other commanders of armed groups active in Iraq and close to political parties in the government.

The Iraqi parliament had on Dec. 19, prior to the attack, commemorated the two men’s deaths, sparking criticism from both Iraqis and foreign officials.

Though some placed the blame on the C-RAM systems for the material damage to the surrounding area and the injuring of civilians, the military official told Al-Monitor, “C-RAM systems fire only at projectiles that are on a flight path to damage the US Embassy.” The official added, “If you throw a snowball at my face, some of that snow may end up hitting the puppy or your mother standing next to me when I lift my hand to stop it; but the blame lies with whoever threw the snowball in the first place.”

The prime minister said that his government, which took office in May after the previous government was brought down by massive protests in late 2019, was “working to repair the devastation of previous years bought about by the corrupt” and that networks involved in “corruption, murder and kidnapping” were attempting to provoke fresh crises.

Several pro-Iran armed and political groups active in Iraq made statements against the attack as well. Asaib Ahl al-Haq commander Qais al-Khazali said that while attacks on US military facilities are acceptable, “We will never authorize an attack on an embassy.”

He was speaking in the name of the little known "Coordinating Body of the Iraqi Resistance." He said, “Targeting the American occupation bases is a right protected by the laws of heaven and earth,” vowing to “liberate our country and avenge our martyrs: The time for reaction is not yet right, but it is not far away.”

Those claiming responsibility Dec. 21 were apparently from a little-known group, Saraya Thar al-Shuhada. The group is one of many appearing in recent months that most observers believe are linked to various other larger Iran-linked armed groups but used by the latter for the purpose of plausible deniability to avoid backlash for the loss of civilian lives and other damage resulting from such attacks.

Some say these groups are nothing more than a front for armed groups that are part of the country’s Popular Mobilization Units (PMU). The PMU is a large body of mostly Shiite armed groups that came together or were formed to fight the Islamic State after it took over Mosul and vast swaths of the country in June 2014. Highly respected Grand Ayatollah Ali al-Sistani had at that time issued a fatwa calling on men to take up arms and defend the country. Many but not all of these groups were later granted official status as part of the PMU and now receive government salaries and pensions.

Many of the larger groups in the PMU that existed prior to 2014 have a history of receiving military and ideological training from Iran as well as funding; many in these groups will very openly proclaim on social media and to journalists that they are engaged in a religious “jihad.”

There have been attempts in recent months to move factions linked to Iraq’s holy Shiite shrines further away from the influence of ones seen as more staunchly pro-Iran.

Meanwhile, the continued US drawdown amid economic hardship means many Iraqis are wary of what comes next.

Financial difficulties may also provide fertile ground for propaganda from these “outlaw” armed groups, as some Iraqi commentators have noted.