A group of Iraqi counterterrorism forces raided a headquarter of a militia in southern Baghdad, arresting some of its personnel and confiscating rocket launchers allegedly prepared for attacks against US bases. 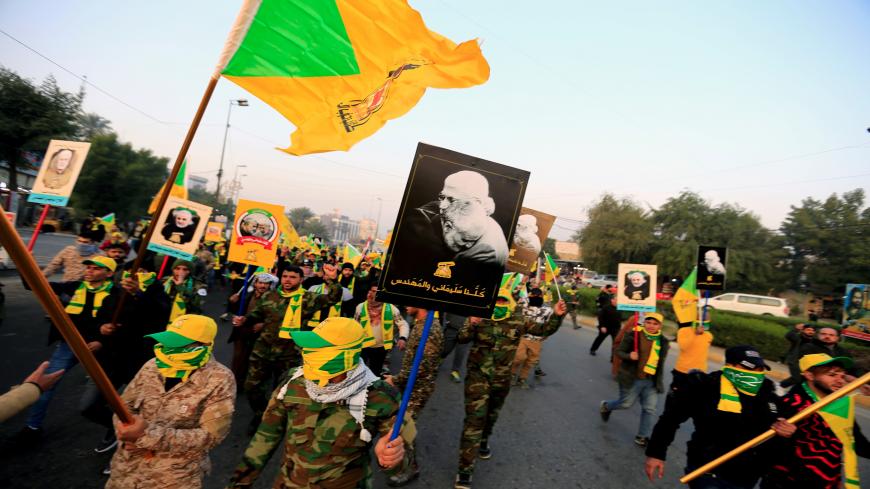 Kataib Hezbollah militia members and supporters gather ahead of the funeral of the Iraqi militia commander Abu Mahdi al-Muhandis, who was killed in an airstrike at Baghdad airport, in Baghdad, Iraq, Jan. 4, 2020.

The rocket attacks against US bases have increased significantly recently, especially after the assassination in January of Iran’s top commander Qasem Soleimani and his right-hand man Abu Mahdi al-Muhandis. A further rise in attacks came when the new Iraqi government decided to open a strategic dialogue with the United States on their bilateral relations; the first session was held June 11 and the next session is expected to held in Washington next month, in the presence of Iraqi Prime Minister Mustafa al-Kadhimi. The targets of the recent attacks include the US Embassy in the heavily fortified Green Zone, a US military base near Baghdad International Airport and Taji military base north of Baghdad.

Over the last few months, new militias have been formed, including Osbat al-Thairin, Ghabdhat al-Huda, Kataib Thourat al-Ishrin, Ashab al-Kahf, Thar al-Muhandis Brigade and Jond Soleimani. However, it seems that these groups are only a cover for Kataib Hezbollah to undertake attacks against the United States in Iraq, without taking official responsibility.

Soon after the CTS operation, hundreds of Kataib Hezbollah members and its allied forces, including Harakat Hezbollah al-Nujaba, gathered at the gates of the Green Zone and briefly entered the area, reaching the CTS building and threatening that they would attack it if their detained members would not be released within 24 hours.

A few hours later, an agreement was reached between the Popular Mobilization Units (PMU) and CTS, under the sponsorship of the prime minister who was contacted by PMU head Falih al-Fayadh and the head of the PMU’s Fatah bloc, Hadi al-Amiri. According to the agreement, the detainees will remain in custody until their court appearance and a joint committee will be formed to investigate the incident.

The Joint Operations Command also issued a statement explaining the circumstances and confirming that the detainees are still held in custody. The statement condemned the frequent militias' attacks in the Green Zone and on state-owned facilities, revealing that information has been obtained about the preparation of new attacks. Hence, they got a judge order and raided the Kataib Hezbollah headquarter, where they found clear evidence including rockets and rocket launchers. The statement concluded, "We, while stressing the seriousness of this behavior and its threat to the security of the state and its democratic political system, assure that these entities have exploited the capabilities of the state, which should not be allowed under any circumstances. We affirm the insistence on continuing the march in achieving security for the Iraqi people and entrust the matter to the judiciary and the competent authority."

In just a few hours, the Iran-backed PMU factions had shown a strong reaction, launching a campaign against the prime minister accusing him of being a puppet of the United States.

Kataib Hezbollah, Harakat Hezbollah al-Nujaba, Asaib Ahl al-Haq, Abu al-Fadhal al-Abbas Brigade and the Zolfaqar Forces called on its members to immediately go to their respective headquarters in preparation for a strong response to the government if the detainees are not released.

Following the raid, the factions' media sources spread the news that CTS was accompanied by US forces and the detainees were handed to the United States, and that US drones are flying over Baghdad in order to raise the ire of their members and supporters. An informed high-level CTS source denied both reports.

Jawad al-Telibawi, a prominent leader of Asaib Ahl al-Haq, tweeted immediately after the raid, “The men of the resistance movement and the PMU are Iraqi men. We do not accept any assault. So do not play with fire.”

Abu Ali al-Askary, (whose real name is not known but he is introduced by Kataib Hezbollah as their security leader), slammed Kadhimi in a tweet, calling him a “mutant whose name is Kadhimi” and accusing him of wanting to escape from the crime he committed against Soleimani and Muhandis by cooperating with the United States in the assassination operation.

In a statement, Thar al-Muhandis Brigade threatened to “cut the hands of those who assault the Mujahedeen and cut the head of the person who gave them this order.”

In another statement, obtained by Al-Monitor, Kataib Thourat al-Ishrin called those who took action against Kataib Hezbollah, i.e., the Kadhimi government, US agents and the children of the US Embassy, warning them, “We are the masters of this game and we will lead it.”

The prime minister is facing a difficult choice, engaged in a strategic dialogue with the United States, whose first step is to protect the US troops and the embassy in Iraq, and at the same time pressured by the militias that are not willing to abide by the state orders.

Kadhimi had warned the groups behind the repeated attacks on the Green Zone previously. In a tweet after an attack against the Monument of the Unknown Soldier, he wrote, “The rockets that targeted the Monument of the Unknown Soldier in Baghdad aim to undermine our stability and future — this is unacceptable. I will not tolerate rogue groups hijacking our homeland, to create chaos and find excuses to maintain their narrow interests. We continue to implement our commitment to protect our sovereignty and promote the dignity of our country and citizens.”

Kadhimi has tweeted frequently on the illegal economic activities of political parties and militias, warning them that his government will impose the law on all parts of state institutions and cut the corruption networks that are feeding them.

Under the current circumstances, the clash between Kadhimi and the militias seems to be unavoidable. The raid on the headquarter of Kataib Hezbollah is just the beginning, as Kadhimi has to put an end to the militias' illegal activities, or his government will collapse due to the economic crisis, the coronavirus pandemic, and Iran and the United States turning Iraq into a battleground.