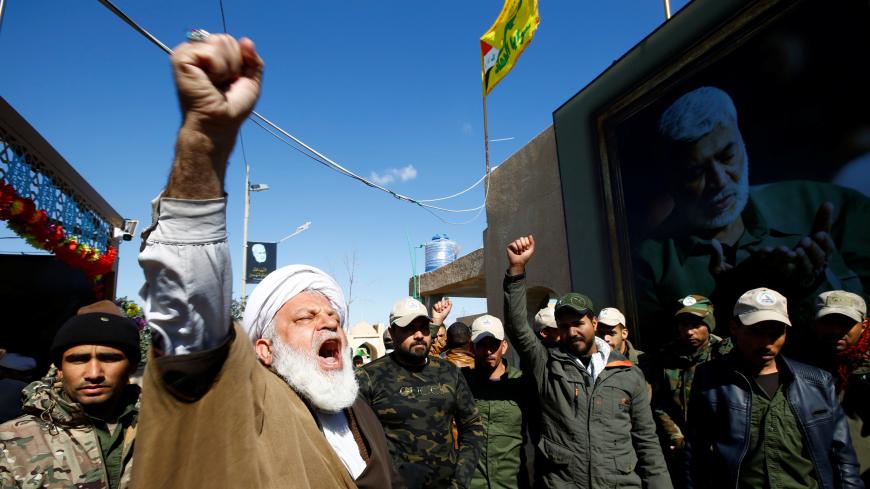 An Iranian cleric chants slogans as they gather to mourn during the 40-days memorial after the killing of Iran's Quds Force top commander Qassem Soleimani and Iraqi militia commander Abu Mahdi al-Muhandis, at the Valley of Peace cemetery in Najaf. - Alaa Al-Marjani

In a span of less than three months, five “new pro-Iran militias” have announced their plans to escalate attacks on US forces in Iraq. Some of them have claimed responsibility for major anti-American attacks. But evidence indicates this is a propaganda campaign conducted by existing militias rather than an actual escalation. The main desire common among these groups is avenging the death of Abu Mahdi al-Muhandis, the Popular Mobilization Units’ (PMU) military leader who was assassinated by the United States alongside Iran’s Quds Force commander, Qasem Soleimani, in January.

In the last of a series of videos purporting to attack American forces or interests in Iraq, a group calling itself Tha’r al-Muhandis Brigade (Vengeance of al-Muhandis) claims they fired two anti-aircraft missiles that hit two American Chinook helicopters. In the short clip posted on the social media platform Telegram on May 22 and that has been viewed by Al-Monitor, two militants whose faces are blurred are seen carrying man-portable air-defense systems. The clip shows one of the militants firing a missile into the sky. The cameraman seemingly follows the missile into the sky, and seconds later a Chinook helicopter is seen in the clip. The video does not show the helicopter being hit by the missile. Also, we don’t see a second missile being fired.

But Tha’r al-Muhandis Brigade’s clip seems to be fake. Al-Monitor showed the clip to Ali Chakav, a senior graphic designer at the London-based Iran International TV. After examining the video, Chakav came to the conclusion that the clip is a montage and that footage of the Chinook was later added to the footage of the firing of the anti-aircraft missile.

The other four groups are called Osbat al-Tha’irin, Ghabdhat al-Huda, Kata’ib Thourat al-Ishrin II and Ashab al-Kahf. Some of these groups’ names have been around for a while without any proof that they exist independent of any known Iran-backed Shiite militias.

Upon examining videos posted by these groups, Chakav concluded that probably some of them are using “the same asset graphic library” and that the videos are “following similar visual identity.” This means that probably some of these videos — purporting to be created by separate groups — are created by the same people. According to Chakav, this is especially vivid when comparing graphic effects in a video posted by Osbat al-Tha’irin showing aerial footage of the Ain al-Asad base in Iraq and the Tha’r al-Muhandis’ clip claiming to have hit US helicopters.

Examining social media accounts belonging to these groups also provides hints that they are actually linked to one another and are run by existing militias loyal to Iran. Kataib Hezbollah (KH) seems to be the main militia behind at least some of these groups.

The Telegram account of Ashab al-Kahf has provided tailored stickers. Interestingly among those stickers is not only their own emblem but that of Osbat al-Tha’irin’s. Additionally, one of the stickers they initially introduced was a picture of Abu Fadak al-Mohammadawi, a KH commander whom the pro-Iran militant groups in the PMU are trying to impose as the successor to al-Muhandis. They later removed the sticker of Abu Fadak.

If this was a behavior exhibited by the social media accounts of Iran-aligned groups, one could not conclude that the same people are probably behind them. But examining other pro-Iran Shiite militias shows this is not a behavior all of them show. Al-Nujaba's Twitter account, for instance, follows seven other accounts; none of them belong to Khamenei.

Michael Knights, a senior fellow at The Washington Institute, considers these activities a “fake campaign.” Knights, who specializes in the military and security affairs of Iraq, told Al-Monitor, “They would fake a campaign of resistance because they want to show they are still avenging al-Muhandis.” According to Knights, the pro-Iran militias “fear US backlash that might cause damage to Iraq and Iran.” He says they are also worried about being rebuked by top Shiite cleric Ayatollah Ali al-Sistani for the damage to Iraq’s interests as a result of US reactions.

Recently, Sistani gave the green light to Shiite militias affiliated with him to withdraw from the Iran-dominated PMU, causing fear among Iran-backed militias that they are losing the popular support of the Shiite public. To anger Sistani at this stage does not seem to be a wise move for them.

Knights believes that faking a campaign “allows pro-Iran militias to signal ongoing loyalty to the axis of resistance but without the risks.” The “axis of resistance” is an anti-American and anti-Israel alliance led by Iran, which includes countries such as Syria but also groups like the Lebanese Hezbollah and Palestinian Hamas.

US attacks on Shiite militia targets in recent months and especially the assassination of al-Muhandis and Soleimani proved the US Army’s determination in responding to any attacks by the pro-Iran factions. This has forced some prominent pro-Iran leaders such as Qais al-Khazali, leader of Asaib Ahl al-Haq, to largely go underground, fearing an American strike. This can explain why these factions resort to tactics that offer them a form of deniability.

This is not the first time Shiite militias loyal to Iran use this method, according to Iraqi security analyst Hisham al-Hashimi. In the past, these groups used similar tactics to cover for their attacks and enjoy plausible deniability.

Hashami told Al-Monitor, “This method of media campaign was used by these factions between 2007 and 2011. They used to carry out attacks [against US targets] while denying responsibility on their official platforms. They created media platforms for fake factions admitting responsibility for the attacks.”

During the years when more than 150,000 US forces occupied Iraq, Shiite factions — enjoying Iran's support — carried out hundreds of attacks against American troops, resulting in “the deaths of hundreds of American and coalition service members and the wounding of thousands more,” according to the US Department of Defense.

This time, evidence of serious attacks carried out against the US troops under fake groups is scarce. Iran is under increasing pressure internally and in the wider region. In the absence of Soleimani, who was the mastermind behind Iran’s regional policy and under the crippling pressures caused by the US administrations’ policy of “maximum pressure,” Iran has been forced to make significant concessions in Iraq.

A senior Iranian official discussing Iran’s moves in Iraq recently told Reuters, “Sometimes you need to step back, observe and plan based on realities on the ground.”

Iran-backed Shiite militias’ fake campaign is a show of strength in a time of weakness. 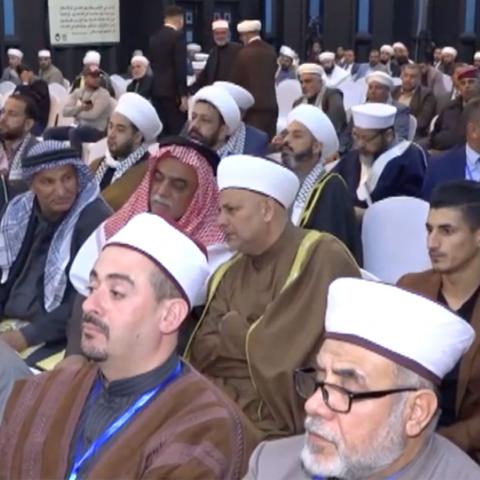 Iran rallies religious leaders to expel US forces from Iraq